Going to as many events as I do (or perhaps used to…), I often wonder what becomes of company-owned demo vehicles once the shows end.

In particular, I’m always curious what fate beholds cars destined for the bright lights of the SEMA Show. Much fuss is made about the ‘crunch’ that goes into building these cars, and ultimately their debut at the Las Vegas Convention Center, but once the show is over their afterlife is rarely discussed.

Sadly, for many, their time outside the spotlight is not very glamourous. In fact, a fair number of SEMA vehicles exist on borrowed time the minute they’re ushered into conception. As long as the car is talked about and photographed at the show, then its purpose has often been fulfilled.

The bleak picture I’ve painted – admittedly with a very wide brush – isn’t true of every car that debuts at SEMA. Such is the case with this Ford Fiesta ST.

When Tucci Hot Rods in Marcy, New York set out to build a vehicle for Ford’s booth at SEMA 2016, they wanted a car that could actually be used. Like the vehicle’s manufacturer, Dom and David Tucci are known more for their prowess with rear-wheel drive, American V8-powered vehicles than they are hot four cylinders. But when given the opportunity to work with Ford corporate, the father and son combo didn’t pass up the opportunity.

At the drawing board stage, cars from the Optima Ultimate Street Car Invitational were used for inspiration. For those unfamiliar, the OUSCI is a post-SEMA, invite-only event designed to test the performance and aesthetic merit of any vehicle entered. Each car is judged in autocross, lapping, acceleration, and braking competitions before finally being judged on performance design and engineering.

TLDR; cars competing the OUSCI need to perform as well as they look, and vice versa. This car has successfully competed, twice.

We North Americans often get the very short end of the stick when it comes to hot hatches, but the Fiesta ST is one of few the car gods deemed us worthy to enjoy. The sprightly chassis served as great basis for the Tucci’s first hot hatch.

Filling out a wide body is easy when you simply spec some lower offset wheels and hope for the best. But with performance goals in mind, that wouldn’t do. The widened Fiesta features equally widened control arms and axles, which ensures everything works as it should despite being set out further than factory. Only after the suspension was modified proportionally were the 18×10-inch Forgeline CF1 wheels and Falken RT615K 255/40R18 tires added.

The wheels are bolted to swapped five-lug hubs, and the braking is handled by Wilwood 6-piston units. JRI coilovers, with PAC Racing springs and Eibach sway bars keep the ride tight.

“The car’s handling really shines on the track,” Dom explained as he recounted some of his favorite parts of the car as a whole.

Any hot rod shop worth the mettle has to good with metal. Tucci Hot Rods isn’t afraid of hammer and dolly work, and the wide body kit on the car was handmade out of steel. The rear diffuser and 3D-printed vents were also done in house.

Seating is provided by Sparco, via Pro 2000 II buckets and 6-point harnesses. A custom roll cage snakes throughout the interior, doing the best job it can of hiding within.

‘You have not talked about the motor; it sounds like just another SEMA car to me, Dave,’ - Anonymous

Well anonymous commentator, you’d be right, except I am about to. A Full Race turbo kit bumps the Mountune-built engine up to “about 325 [horsepower] to the wheel,” says Dom. A Mountune LSD and SPEC stage four clutch keep power delivery beneficent.

Immediately after SEMA in 2016 the car had its first go at the Optima Ultimate Street Car Invitational, where it placed 63rd out of 100 vehicles. OUSCI competition is stiff, and the hot-rodded Fiesta put up such a respectable performance that Falken Tire brought it back for a second year in 2017.

When I asked Dom what has become of the car today, I was relieved to hear that the name on the ownership papers still reads Tucci.

It currently exists in an extremely rare state of being for an ex-SEMA demo vehicle. Like most project cars, it’s not ‘finished’, but in its current configuration it also doesn’t demand anything further to work quite well on both the street and track.

Many SEMA Show cars never see the light of day once the Las Vegas Convention Center lights dim, but this car is different. In Dom’s highly capable hands, it still has a long life of hard driving ahead of it.

I'm always curious, as to what percentage of SEMA cars each year, are just pure show pieces, versus which ones are actual functional cars, like this Fiesta ST..

Gotta remember, vehicles at car manufacturer booths are usually pre-production prototypes that can never be registered for road use, and they always end up in crushers...

I would guess around 1/4 are functional at max

Very well sorted. Must be a blast to drive.

Can you share any details on that light bar?

Its a light bar that we made using KC Hilites Flex lights. They all bolt together and the outer plate sandwiches it to the bumper.

A V8 hot hatch is usually unheard like it's a car usually made in Automation the Game
But props to this father and son duo that was able to make this a reality and an actual functioning car too!

Finished product looks great, too bad it's all wasted on a ST.

One of my favorite cars from the Detroit Autorama years agos. Such a great build.

guess around 1/4 are functional at max

Feel the wrong car is here. Tom's AG built SC V8 Fiesta is a much better example of a hot rodded hot hatch... 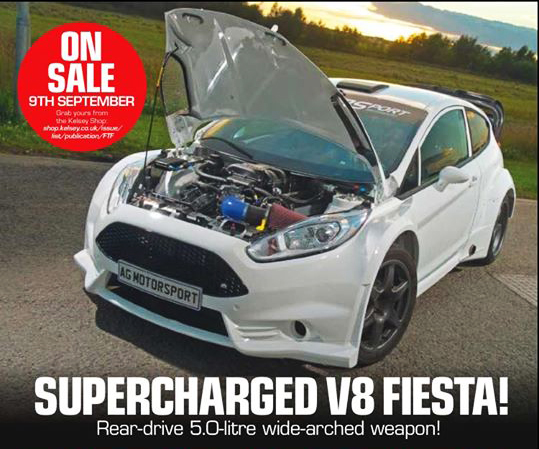 Nice to see some real fabrication going on i.e. the arches never been a fan of the bolt on look so these are some quality work well done!