When Saito-san at HKS gave Speedhunters first access to its 2020 Tokyo Auto Salon showpieces, Dino was going to need a bit of help making sure everything was covered. I couldn’t have offered up my help any quicker.

It’s extremely rare to get this kind of exclusivity before a major event like TAS, as many shops are working past the 11th hour trying to get everything ready for the biggest weekend on the JDM tuning industry’s calendar. The hustle is very real.

Although Dino and I live in the same city, it’s not often that we get to work together. Besides actually enjoying the comradery during a shoot, it’s a great way for me to watch the man at work and see if I can learn a few things along the way.

After the group shots were completed, I was tasked with covering HKS’s subtle A90 Supra build, and this is when things took a turn for the unexpected.

I had done a bit of filming beforehand, and when I turned my camera back on the battery died completely. No matter though, as I always keep three extra batteries on hand for situations like this. Well, I usually do – a panicked rifle through my bag revealed that in my sleep-deprived state I had left the other batteries on my desk next to my laptop. Sh*t.

I’d always been keen on doing a shoot with a cellphone, mainly to see how far the tech has come, and although I would have prefered a more relaxed shoot, now was my chance. After a few traditional bows to apologize, out came the phone and back to work I went.

Dino has already given you a look at HKS’s widebody Supra, but knowing that most A90 owners won’t be going that extreme with their cars, HKS wanted to showcase a more subtle approach to tuning the new Toyota sports car.

Everyone knows that wheels can make or break a car, and these 19-inch Yokohama Advan Racing GT wheels made especially for the A90 Supra definitely check all the boxes.

Besides coming in an original color scheme, the more concave spokes allow for better clearance of the beefy front calipers, and more room for larger aftermarket upgrades.

The subtle drop comes courtesy of a lowering kit that retains the factory active dampers.

Just like the widebody car, this one also comes equipped with an HKS exhaust system. To be honest, I’m not really a fan of the stock B58 soundtrack, but with this system the cracks and pops are at least a little more entertaining.

HKS knows the potential behind this inline-six and have been developing parts for the cause ever since they got their hands on one almost a year ago. However, this engine is stock save for a blow-off valve kit for better throttle response and added whooshing. Sometimes it’s the little things.

As for interior changes, a pair of Bride Low Max seats and some Bride mats is all it took to give the cabin a different feel.

It’s great to see tuners like HKS taking the new Supra platform and building the sort of car that a lot a A90 owners would surely like to own.

The Titans Of Supra Tuning, Then & Now

Your shots and the article are good, but the new Supra is the most over-hyped car of the last decade. A re-branded BMW should not be the flagship car for a company. I hope this car goes the way of over-fender kits on super cars.

I drove one recently and I thought it was a total pile of scrap. Terrible iteration of a classic and you can definitely tell it's a Z4 when you drive it. I don't get all the dong riders who are hating on people critiquing a car from an educated stand point.

All of the supporters of this car speak very emotionally without backing their opinions with facts. Don't worry Marc! A lot of people here aren't too educated when it comes to the cars they glorify.

so you hope A90s are still a fad 10 years from now? overfendered supercars are going strong lol

UaUaUa ItS a BmW gUyS. Get over it dude... buy a different car if your not into it. Brands have been collaborating on cars for decades. At least Toyota teamed up with a brand that is known for amazing L6 engines. They don't have the time or money to re-engineer the JZ.. at least its not a hybrid or a crossover or something silly like that.

I really wish people would just get over this whole hate thing for this car. It looks good, it goes great. People whinged for YEARS that Toyota was not producing anything that wasnt boring and vanilla anoymore. Not they have a couple performance cars back on thier floor.....and they arent good enough for everyone.

Who said it was a flagship ?

Toyota themselves, But I agree having driven this car while it is a OK drive it is not a great car after a handful of laps at the race track you already get brake fade. if you had a race of 10 lap's a FT86 would win due to the Supra brakes failing after 4. FT86 is a great car and i had a lot more fun in it over the supra the car to look out for will be the new GR Yaris.

what is sure, it's not a track car. nor it's a GT. A sportscar for backroads, but with no wankstick (even if its german sister has one). Overall it seems like Z4 is slower, but better anyway, since it's more comfortable and you can drop the top.

I would love to get behind the wheel myself on so e proper roads and see what it really can do / judge for myself. I will admit that it is definitely hyped to the nth degree (as our Auto Salon coverage will explain in sure lol)

May it perform and handle like a dream, design-wise (like most modern cars) to me it's to neo-barock(koko). It lacks lightness and a subtle touch.

This maybe the best looking A90 I have seen, I'm definitely warming to it. Also those phone shots are awesome, we really have come a long way.....

Yah - I def love the less is more approach on this one. And we reallllllllllly have lol. I quickly realized it's limitations on this shoot but by all means if it's all you got then it's not a bad alternative

Looks like someone forgot to mask off those brake lines before painting the calipers..?
I'd love to see some photo gear articles.

Waiting 3-5 years to see if the value drops as fast as a BMW after the factory warranty runs out. But this is what Toyota wants to give the masses. Meanwhile in the Lexus division, I am sure they are developing a turbo V8 for the LC. This is what irks me about Toyota.

Simple and clean! Love it!

Not every 5th gen Supra is "A90". A90 name was used for promotional reasons for prototypes only. In europe there was "A90 Edition" sold and those can be called A90. Apart from this Toyota isn't using A90 name.
It's like calling every Audi an Audi S-Line.

its like calling every Audi an R spec line.

I was just about to say you've outdone yourself here Ron, and then read that you shot all this ON YOUR PHONE.

I kneel before this magnificence.

Hahaha to be fair, the cover shot and first two shots were with my camera. It's after that rear shot when everything was cellphone v.v

Can't pick the switch unless you really squint at it, the detail is remarkable. Excellent work 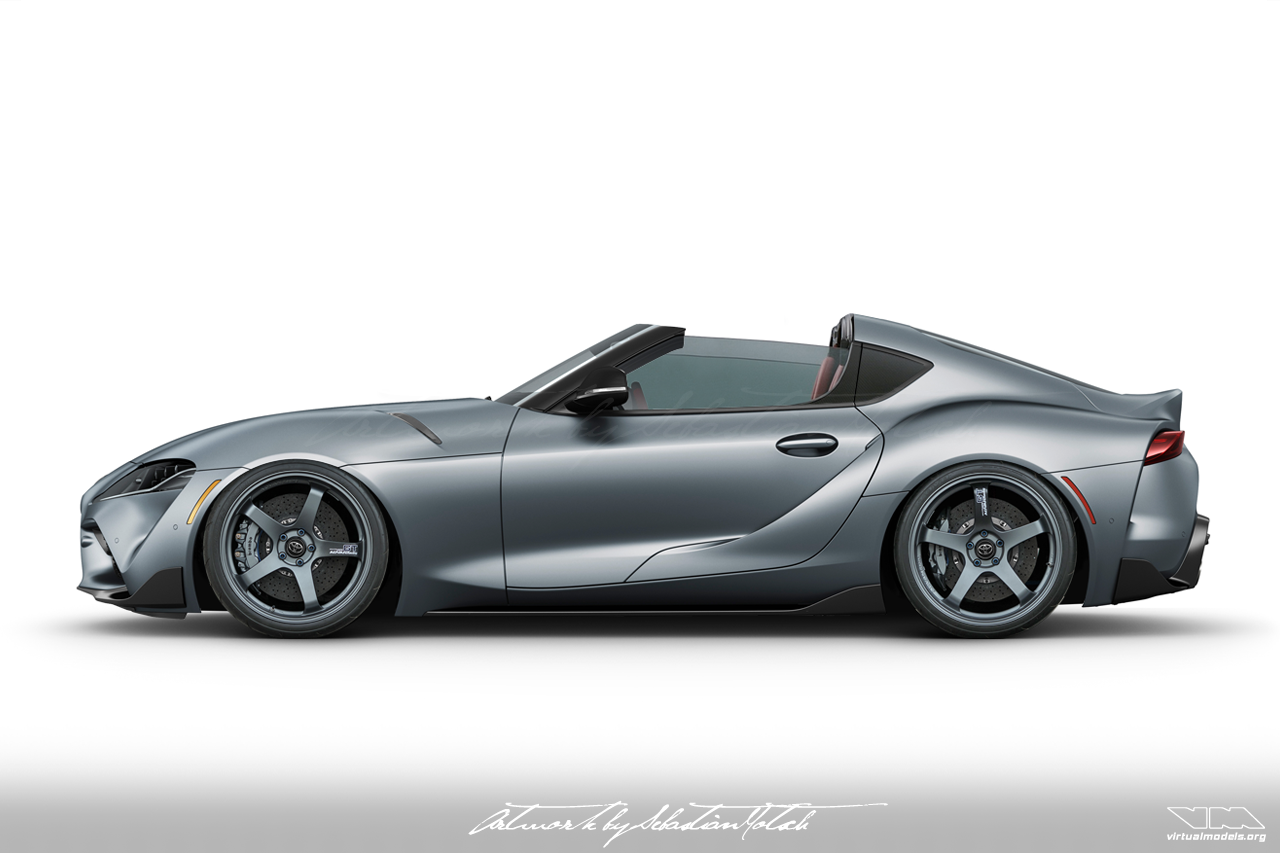 Cheers for that! Yah, you either pack up and leave empty handed or make the best out of a bad situation. That Targa is mint! Toyota needs to get on this

Finally, an A90 supra that doesnt have dumb stance kid wheels

Nice Supra photo Ron, I hope you can go to 3D Design or CPM to make feature about their Z4. Love seeing them in TAS event

Thank you! Will have to try and get them on the list to vist as well ^^

its a bery good car #speedhunters

Man, these are killer. Phone or not. You guys should shoot some more features on your phones haha. And this is what I like to see from builders, nice clean builds with subtle additions to elevate the car and not change it.

Hahahaha I wouldn't recommend it! But as a back up / last resort it def is the way to go. Also Agreed- subtle and clean will always be welcomed in my eyes

It's funny that you shot these with a phone. I've been going back and forth with my dad on this. He's getting older and he's started to get tired of lugging around a "heavy" camera. After seeing my phone pictures from my brother, he's got this bug in his ear that now he would rather shoot on a phone. I always tell him, you'll never get the same results. A phone just kinda fudges things together to make the "desired" result. Don't take this as a jab...composition-wise, these photos are spot on, I love them. Quality-wise...take another apology bow, and never forget extra batteries...ever haha! No hard feelings, you did what you had to do, but I might even show him this article as an example of phone pictures. I will be always back DSLRs over phones.

No hard feelings. I also would rather have a DSLR over a phone. Kind of a "duh" lol. Phone tec has come a very long way and if it is more of a hobby vs doing this as a professional / some sort of income, then by all means the phone is a good alternative. It's always on you and you can still do some pretty decent color grading on them as well. However it IS incredibly limited.

I agree that they've come a long way. I had one of the first camera phones available back in the day and it took terrible photos. To this day, I'm still not impressed with the outcome, but then again I got the zero dollar phones. I've been tempted by the newer fancy stuff but I would rather spend my money on camera gear!

The new Supra's shape has definitely grown on me, and having Mt. Fuji in the background doesn't hurt! Great job.