SHARE Drive4Paul: Making The World A Better Place, One Event At A Time

With over 400 cars of all styles and genres uniting together for a worthy cause, Drive4Paul Malaysia made me proud to call myself an automotive enthusiast. It truly was an honor to be a part of.

I highly doubt that the masterminds behind the Fast & Furious could have ever imagined the profound effect the franchise would have on global car culture, especially in regards inspiring the younger generation.

I can vividly remember watching Brian O’Conner – played by the late Paul Walker – on the silver screen in the first film, and being enthralled. Yes, Fast & Furious movies are a lot more action than cars now, but the entertainment value is still there.

Besides being ‘the buster’ and a genuine car enthusiast, Paul Walker was also a humanitarian. In 2010, he founded Reach Out WorldWide (ROWW) in almost pure secrecy after the massive earthquake that devastated Haiti.

ROWW’s mission is to help those affected by natural disasters. They’re normally on the front line soon after a disaster, providing medical assistance, helping with the clean up efforts, and trying to reinstall a sense of normality to those who have lost everything. In terms of philosophy, if you can make a difference in just a single person’s life, then the world has been changed for the better.

After Paul’s life was tragically cut short, his brother Cody Walker and Cody’s wife Felicia continued the legacy of helping those in need alongside other likeminded individuals.

Drive4Paul is a charity event that brings enthusiasts together to celebrate all things automotive, with proceeds going to ROWW’s disaster relief efforts.

Malaysia is a country that has been largely spared from natural disasters, so Alie, the man behind Retro Havoc, thought it would be really great for Malaysian car enthusiasts to try and help others in need, and ROWW was a perfect match for that. In fact, the idea was so well received that Malaysia’s Ministry of Tourism got right in behind the cause, becoming the first government body to assist and donate to the organization. The Malaysia Automotive, Robotics & IoT Institute also stepped up to help.

So what all does a Drive4Paul event – which have been run in a number of locations around the world – actually entail? Normally, it’s a simple gathering of enthusiasts from the local area coming together and donating to a good cause.

But this is Malaysia, and having covered a wide variety of events here in the past, I knew there’d be a little chaos in the mix to spice things up.

The first day – yes, this was a two-day event but I’ll get to that later – was a massive gathering at a disused air force base in the heart of Kuala Lumpur. Cars began rolling in around 6:00am and the space quickly filled up.

The open area was perfect for a drift demonstration, and I’m sure that many people that turned up to spectate had never seen the sideways spectacle in person before.

With parked aircraft providing the backdrop, it made for one hell of a sensory show.

Drivers were even giving ride-alongs to anyone who wanted to feel unnatural g-forces being exerted on their body.

This Toyota Verossa had four bucket seats installed, so a group of three friends could experience the fun together. Now that’s a drift taxi.

The main event wasn’t the drifting though, nor was it the cars that filled the airbase hangar – it was the meet and greet with Cody, who rolled into the venue in the sort of convoy that could only be pulled off in Malaysia.

Mustangs, GT-Rs, Aventadors and other supercars revving their engines and shooting flames paraded in with Cody up front.

After a short speech, Cody spent the rest of his time at the event interacting with fans, signing autographs and posing for selfies. I too continued to mingle in the crowd, hanging out with old and new friends while soaking up the overall vibe.

After a long and hot day, all I wanted to do was head back to my hotel, grab a tasty adult beverage, and rest up for what I was promised would be even more chaotic second day. What on earth could they have possibly lined up?…

More Stories from Malaysia On Speedhunters 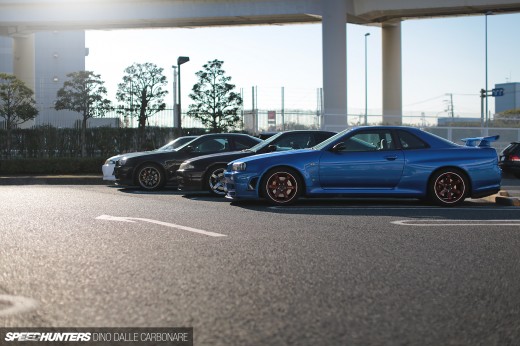 Should You Celebrate Paul Walker?
We Get Personal in Japan

If that's not wallpaper material I just don't know what is.

Can we get a feature or at least some close ups of the Supra with the black accents?

now those are cars we want to see on feature stories.

with the airfield and large runway available.....they should do multi-car drag events, etc.

Considering it was placed on a runway....suddenly I got Race Wars vibe from the first F&F movie