Have you ever watched a toddler try and pick up a ball for the first time?

They walk toward it unsteady and unsure yet determined, before inadvertently kicking it away. After a sigh and perhaps a small scream, attempt number two commences which either results in triumph or starting the process all over again.

Building a car can be extremely similar.

The try, fail, try again cycle can be absolutely maddening, but after over a decade of endurance, Cheyne Head Tarallo wouldn’t have it any other way.

“This car has been a full out garage build since day one,” he says. “It’s made me really comfortable with failing, something I’ve done multiple times with this car”.

If you’d assumed by this Cressida’s looks the builder is an early 20s individual searching for some sort of instant gratification, you’d be wrong. Cheyne almost seemed in disbelief that Keiron and I were interested in the car at all. I’m actually still not totally convinced he doesn’t think we’re having a laugh at his expense.

“Some people take car building very serious and build for recognition; that’s cool, but I just built this to have fun,” Cheyne says.

The opportunity to cut this car to bits came after a bit of a mishap. Previously Cheyne owned a Nissan 240, but that car met an unfortunate end when a GMC Suburban tried to become one with it. The result of the GM/Nissan forced love-in was a total loss.

Shortly afterwards, a friend offered up this 1986 Toyota Cressida for sale. Previously 1UZ-FE swapped but motor-less at the time of sale, it came with an extremely low asking price of $200. Despite not being much of a Toyota fan, it was too good of a deal for Cheyne pass up.

Originally the plan was to drop a motor in and build a car capable of being driven on the street and sideways on the track, but before any sort of aggressive driving could be done the suspension was in need of some attention.

Stock Cressida suspension offers little by way of adjustment, especially in the rear, so falling back on his S-chassis roots Cheyne tossed as much S13 at the car as possible. Bolting S13 coilovers in the front of the Toyota was a rather quick job, but installing the S-chassis rear subframe required a whole lot more effort.

Not yet being proficient with structural welding, Cheyne had his friend Tyler of OdysseyFAB zap in the pick-up points. Tyler welded the rear end in, in the garage where the car sat, while a friend manned the amperage pedal from a truck in the driveway.

The desire to keep the Cressida a garage build wasn’t ‘built not bought’ bravado – it was a matter of budget. Being indecisive on someone else’s dime is very expensive, but when you’re shop foreman, project manager, and grunt all in one, you can make any decision you wish.

“If I don’t like something I cut it out and replace it with something I do,” says Cheyne. “There’s nothing to lose with a car that doesn’t owe you anything”

So to that end, shortly after the suspension was installed and the car was put on the ground, it was rolled back into the garage to go lower. This time the strut towers were extended all around and Powered by Max subframe risers were added in the rear.

Now at a height Cheyne could appreciate, the thought of rolling the dice every time he hit the track looked like a losing bet. It was then the choice was made to make the car a carefree street cruiser over a sideways machine.

Like so many others featured here, the visual inspiration for this car came from the carefree tuning nature that exists in Japan. Bosozoku styling particularly stood out because it’s so unlike any other form of tuning around the globe.

Bodywork was an area Cheyne had no experience, but his $200 canvas was waiting to be experimented on.

A quick welding lesson from his cousin later and the car began to drastically change shape, starting with the nose. The new hood is a combination of almost two factory hoods, a donor hood being cut into about nine pieces before being grafted to the original hood extending it 12 inches overall.

On many bosozoku builds factory body lines end abruptly at the hood extension, but not here. Using factory sheet metal to create the extension makes the hood look as though it’s some obscure factory piece designed by an overzealous, under-engaged designer.

As over-the-top as the car is, a lot of effort has gone into keeping some of the Cressida’s distinctive characteristics.

For example, care was taken to extend the body molding from rear tail light to front fender edge. That in itself took multiple pieces, but since I’ve brought it up you’ve probably already scrolled back to take a look at the belt line of the car.

The tip to tail trim is rather satisfying, isn’t it?

While taking a second look, did you notice that the bumper is that of a CA Honda Accord? The square lines of the factory Cressida make junkyards the perfect place to look for new body modifications.

The lip affixed to the bumper comes from another rather square vehicle, a mid ’80s Volvo sedan.

“There are pretty well no body kits made for the Cressida, so I spend a lot of time looking for inspiration in junkyards,” Cheyne added.

CAD – cardboard-aided design in this case – was used extensively in prototyping the car’s construction, particularly in the creation of the spoiler and the fender flares.

“I went and bought hundreds of dollars’ worth of poster board before I did anything on this car; my garage is constantly full of paper clippings,” Cheyne says.

Again, not being a metal fabricator, Cheyne had to get creative shaping sheets of 18-gauge metal. The gradual bend in the rear wing was done over his knee, and similarly the flares were bent over other household objects to achieve their final shape.

More commonly found in off-road applications, these wheels suit the build shockingly well. A dash of camber and a side of tire stretch allows the car to roll down the road without much interference.

The same can’t be said for the car’s underbody and the ground.

When asked if he’s ever considered switching to air suspension, Cheyne says he’s never once entertained the idea. Driving this low, all of the time, is part of what makes this car, his car.

At this point everything is relocated to the point where any damage caused by scraping is largely superficial anyway.

Bosozoku cars are not always known for what sits between the strut towers, but remember this car came with no motor and returning it to stock would have been rather dull.

The now teal black-top SR20 was just about all that was salvageable from his twisted 240. It’s complemented by a Tomei M79 turbocharger and Tomei Expreme turbo manifold. While an A’PEXi air filter helps out on the intake side, a full 3-inch system with a 4-inch door exit takes care of the exhaust.

Yes, door exit. In the quest to get the car as close to the ground as possible the exhaust found itself stuck in a rather precarious position.

Raising the car not being an option, the next obvious choice was to route the exhaust inside. It might be a little loud but nothing that prevents the car from being driven as though it were routed underneath.

That space has been filled with a home built and designed v-mount radiator/intercooler setup. Along with a remote oil cooler and associated ducting, the car maintains quite favorable engine temperatures.

Cheyne has driven the car all over Florida and never once has the engine temperature exceeded 190°F (88°C), which for a tuned Nissan SR20 transplanted into a Toyota isn’t bad at all.

A trio of gauges mounted where the radio once was keeps tabs on the motor’s wellbeing. Long term goals are to completely redo the dash area of the car, because in Cheyne’s words “there’s simply too much going on from the factory.”

The rest of the interior is mostly gone, replaced with custom Masonite panels that have been wrapped in plaid sourced from the local fabric shop. Lack of creature comforts seems to scare most away, so all the seats aside from the captain’s chair have been pulled.

This makes the driving experience Cheyne’s own sort of rolling escape from the world.

With a car as extreme as this, the visual might not be universal, but the ethos behind the build most certainly is. It’s built to evoke a smile at the turn of the key and rip through the countryside.

From initial conception to current iteration, the car has been under construction since 2008, and it still humbles Cheyne daily when it comes to dealing with failure. Call it stubborn, but in a battle of attrition Cheyne is determined to never let the Cressida win out over his ideas or skillset.

Edging past a decade and looking to the next, only Cheyne really knows where this car is headed. Currently he’s musing over how to get the Cressida lower and eliminate the rear doors in an atheistic manner. Then, maybe, he might get the car painted a different color. That is of course after he finishes his new tail light panel and fine tunes the fitment of his new wheels….

This car is freaking awesome on so many levels.

This car has a lot of presence and is pretty cool to see in person. 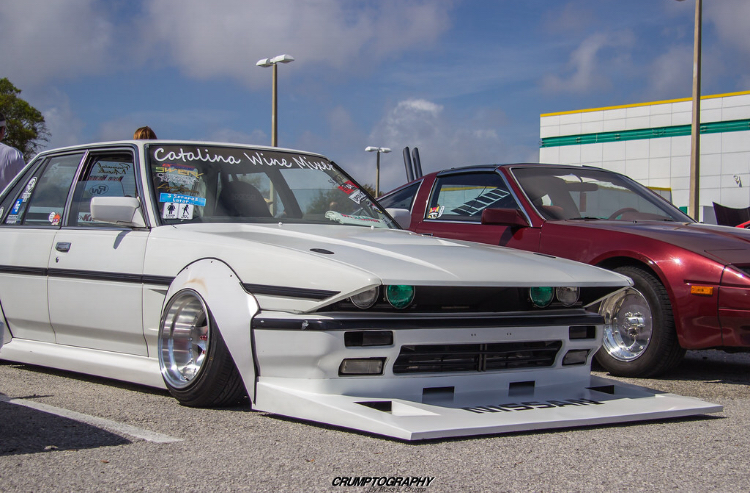 Is your picture a more current pic of the car?

Yeah it's changed, it is always changing.

That’s the most current I have, but it has evolved since with different wheels and overfenders.

I want an underbody shot of this to see how exactly he ran the exhaust. This is a LHD car and his exhaust is in the left rear door, how?

This thing makes my skin crawl in a bad way!

tryhard much? hop off the internet
but nice swap

Not sure I understand your comment. You say trying hard like it's a bad thing. He built the car HE wanted in his garage. At the end of the day isn't that something we should all want to do?

Dag fed a troll again. I ought to know better.

Endlessly better than the high dollar crap builds you post so often now. More interesting cars like this, please.

These kind of builds always give me more inspiration than the big dollar ones. Its always great to see people get imaginitive in building the car THEY want without spending thousands, more stuff like this please!!!!

This thing is awesome. Unique as hell.

Hell yeah it is!

If they ever decide to rename the state of Florida, my vote would go to "Thunderdome."