We’re spoiled for choice this weekend with motorsport.

The World Rally Championship is currently tackling Chile, Formula 1 is in Spain for the Catalunya Grand Prix, Formula Drift is running up the hill in Road Atlanta and I’m sure there are many, many more events happening all around the planet.

You can, however, only really watch one at a time which is why we’ve chosen to cover the one event that seemingly combines all of the above into a single weekend of the best possible kind of mayhem: World RX at Circuit de Spa-Francorchamps in Belgium.

I’ll start with a confession: this is my first ever rally cross event. Despite having grown up with it on the TV as a kid, in a household where names like Schanche, Hansen, Eklund, Gollop & Alamäki were commonplace, I never previously made the time to attend. I now know what I was missing out on.

During the drive back from the track to my hotel, I had some time to take a breath and really try to figure out my feelings on World RX. My experience, so far, is that it’s a motorsport series which a lot of others could learn from.

First, there’s the cars; 600hp, 900Nm, 8000RPM and AWD machines with no driver aids. These are cars which are designed to excite not just the drivers, but the crowds in attendance, too.

Ever heard six Supercars preparing to launch at the same time? It’s not something you will forget. For me, it’s on par with the first time I heard a V8-era Formula 1 car being driven in anger.

Then, there’s the venue. This weekend World RX makes its debut at the aforementioned Spa-Francorchamps, probably one of the most famous race circuits on the planet.

Not only that, but the course has been custom designed to ensure the crowd have an almost perfect view of the action at all times while also including the left-right combination of Eau Rouge and Raidillon.

Lastly, there’s the intensity of it all. From the pace at which the event is run (the Supercars aren’t the only class, either) down to the competition for space on track.

It has been absolutely fierce from the get-go, and today was only the first two qualifying races.

Of course, you should only consider this as a prelude of what’s to come as we still have another day of competition tomorrow. We’re here as guests of GCK & Bilstein, which has so far afforded us a level of insight & access which is perhaps not readily available to most.

We’ll be sure to make the most of it, but for now, it’s time to clean cameras, lenses and self before grabbing some shut eye and heading back to the track first thing in the morning. 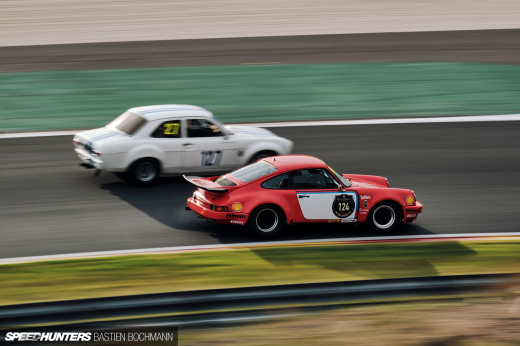 This is amazing stuff Paddy! I want more!

Loads more to come from Cian & I.

Looks epic - can’t wait to attend my first RX event at Silverstone at the end of the month!

THIS is motorsport. Proper cars, at a proper track, with a format to keep spectators interested.

Drifting can go away now!

Why does it have to be either or?

I like the photo of the fence the best. Photographyhunters in full effect. More Dino features thanks.

Yes! I love Rallycross!
It is my favorite motorsport!

It is strange that the winner of this stage, Timur Timerzyanov in the photos is almost invisible. Don't you like him?

If I knew he was going to win today when I wrote this yesterday, I probably would have bet some money on him.

I advise you to follow this guy. Next year he will seriously fight for the championship. Tatars always achieve what they want. I will look forward to new reports on rallycross, you can do great