Dubshed is a welcome constant in a world of change.

In a period where I’ve developed massively as a person and as a taker of car photos, and have continued to push my sense of adventure with new events, the trip ‘up north’ has remained year after year.

Dubshed, for me, is a personal gem.

As a Speedhunter, the mental drive is to go out and explore the maximum that any event has to offer, search out all the stories happening, and find every unique visual perspective.

When I take to a rally stage, the truth at times is that I’d rather not meet another person, as it means I’ve found a shot nobody else has. It’s a drive to be different, but at Dubshed it’s the furthest thing from my mind, as unlike any other event I’ll likely attend all year, the social side of the event is given priority.

Take a bag of camera gear and you can’t spend time with friends and acquaintances, or in general, really take in the vibe of what’s going on around you. So this year, I made a decision: One camera, one 35mm F1.8 lens, and no more.

Instead of living Dubshed through a viewfinder, I was able to experience it through a group of my closest buddies, each bringing a different taste in cars to an event that has, over the last four years, evolved massively from just ‘another VAG show’.

Not under pressure to see every last inch of the show, the first day was spent elsewhere in Northern Ireland; rather than rush through the early morning haze of a Saturday morning, we continued on in search of a hidden gem along the Irish coast. Stretching from Larne to Portrush (and onwards to Derry), the Causeway Coastal Route is utterly spectacular.

It was a chance to go sightseeing, like tourists, pretty much right on our own doorstep. After heavy driving rain right up to and beyond the border, the sun broke through and smothered the flowing tarmac in glorious sunshine. The icing on the cake was a run over Torr Head, possibly the single greatest road I’ve ever experienced.

Getting a chance to get away, drive our cars and then spend an evening talking about even more cars is something so vital to the life of a petrolhead that it feels so welcome and enjoyable. Dubshed brings together people that I know only for Dubshed weekend, and who I’ll likely not see until Dubshed weekend next year, but with whom I could spend hours talking about all things automotive.

Come Sunday, it made sense to actually go and look at Dubshed itself.

I have, for quite a while now, been rather fond of the Mk3 VW Golf. It’s likely a combination of my desire to be a bit odd, as well as the general apathy they were held in that attracted me.

The fact there was a rather unsuccessful rally iteration likely added to my feelings towards them, but I may just have to change my opinion due to two facts: Firstly, I’ve now seen in the flesh my possible favourite Mk3 of all time, and secondly, it was incredibly clear that the once unloved Mk3 is now becoming ‘the car’ in the classic VW scene.

Everywhere you turned at Dubshed there was a stunning Mk3 sitting there looking incredible, many executed in a very ’90s style that has remained utterly timeless. Clean bodywork, tasty classic wheels, a nice stance and you’re onto a winner in my book.

While the more traditional vibes are back in vogue, roughly 20-feet from the entrance sat possibly the ultimate incarnation of a Golf Mk3 road car, the yellow beast owned by Rae Gami. This car has a bit of a cult internet following thanks to a few rowdy videos on YouTube, but in the flesh this thing is truly wild.

If you were to pick a car for a 1000-mile road trip, this would likely be the very last one on your list. The exterior is dominated by some extreme weight saving measures; the doors and boot are carbon-Kevlar, the mirrors carbon fibre, and the bonnet and bumpers have each seen a hole saw.

Under the bonnet, a Precision turbocharger sits off the VR6 lump sending a whopping 750bhp to the four wheels. Inside, a digital dash is about as far as luxuries go, as combined with a roll cage, Sparco bucket seats and plexiglass windows the vibe is strictly ‘race car’.

Blown away by the mega Mk3 and having blitzed through the main hall, it took a blast of fresh air and a stroll into the unknown to find the next wave of show stoppers. Be warned, though – I have an odd sense of what counts as cool.

While the size of the Dubshed show has fluctuated over the years with the addition of temporary marquees, 2019 saw the reveal of a second, incredibly large hall within the Eikon complex. Dubbed ‘The Other Shed,’ this was home of the non-VAG; the imports, the odd balls and the sublime.

Being met by the ‘Low Brain’ Odyvia was certainly unexpected; the battle-hardened V8 monster is well known in European drifting circles for pushing a real sense of style and fun in a cut-throat competitive world.

Looking like it could have jumped straight from the pages of a Dino story from Japan, the Honda-faced Nissan is set to compete in Ireland this year in the hands of Mark McBurney.

While Dubshed is known all over the country for its envelope-pushing modifications, a trio of OEM gems stopped me in my tracks very quickly.

The first one that had me sucked in was a real rally nerd overload – a Vauxhall Nova Sport. Known as the Opel Corsa A in other parts of the world, the Nova was about as basic as a car came in the late 1980s. Naturally, for a cheap affordable runaround they became the perfect base for grassroots rallying, with a certain Colin McRae tasting early success in the diminutive Vauxhall.

Although the range grew over time to include hero cars like the Nova GSi and SRi, the homologation special Sport, with only 500 built, are now the most valuable. Right next the Nova Sport that caught my eye? Just another one. I may have gone giddy…

Barely 20-feet from the Nova pairing sat another star of the show for me. Now, bear with me as my mind works in odd ways, but yes, I went to a modified VW show, and left thinking about a totally stock Honda as being my favourite car.

Not just any Honda though, as to me the EK9 Civic Type R may well be the pinnacle of Japanese cars. The incredible FWD chassis, razor-sharp handling, timeless looks and VTEC riot are an incredible mix of elements.

In Ireland, many genuine Type Rs have led hard lives, often ragged to a point they end up scrapped or broken for parts. This one is very different as it has just gone through a rather thorough restoration, and it is an absolute masterpiece.

I am not a VAG guy in any sense, even though I’ve been to Wörthersee, Players and Dubshed. I appreciate the scene without knowing the intricacies of parts, components and style that could mark one car from another; I simply just like cool cars, ones that I can spot features that tick boxes in my head.

Roaming a show with a group is a great barometer of cars, as discussions can be had with totally differing opinions. The Dubshed ‘Other Hall’ was a perfect place for this, the vast array of styles and vehicles piquing different interests.

While some fell head over heels in love with this very cool BMW E36 Compact – and with a 325i engine and BBS wheels it was pretty incredible – others (read: mainly me) were drawn in by a manual Volvo 850R, possibly the ultimate in wagon goals.

But for all the pushing of boundaries and the breakdown in barriers between car cultures, Dubshed will always remain a traditional VW show at its core.

Stepping back into the main hall, the elements are all there. Mk1 Golfs, executed cleanly, will remain timeless. Although Paddy may believe that the scene has hit a plateau, there is something utterly timeless about a lot of these cars that I do wonder where the next push could come from?

There was a time when the ‘Euro style’ was a real difference that could be noticed across country boundaries, but it feels now like an almost generic wave has washed across the territories.

Relics of the Euro days now stand higher than ever before, both as a study into a style rarely seen in these parts and a marker of a time of innovation that may be slipping away.

But then, other things will never change.

Well-executed cars will never go out of fashion, as they will always have a cool factor regardless of whether it’s something original or copied. Dubshed, as with most shows, on the surface can at times feel like a repetitive circle of cars year after year, but it’s noticing the small changes and tweaks that keeps things interesting and fresh.

Some go all-out and return with a completely new iteration of their machine, while others certainly take a lot more spotting.

With its 10th show in the bag, the crew from GTINI have built a success story with Dubshed that has pushed the limits of what we know as a car show on the island of Ireland. Numbers grow year after year, both in cars and spectators, and it’s one I can’t stop returning to.

Most events are a case of ‘been there, done that’ in my head – Dubshed never feels like that. You can enjoy a show with friends, as well as shoot it, but you’ll also realise after the fact that the majority of award-winning cars never even registered on your radar.

It's a shame to see no Passat/CC models around at these shows - are they not super popular? That Green Mk3 VR6 looked epic, some great photos here

Yes thats true, i remember the CC being popular back when it was released, especially among the EU stance scene, but i am not sure its aged too well, and its almost "melted" soft shapes make it not so easy to play with style wise i think, well most of the ones we used to see just were slammed on bentley wheels !

I think its a shame that the old performance styling, that was quite big a while ago has slightly faded away.

That Volvo 850R is so goddamn awesome!!!! Beautiful shots man!

Anybody have more info about that BMX drift trike?
I'm still looking for a reason to buy a welder, that beast is the perfect excuse.

That dark gray metallic Golf MK3 with the leather interior looked incredible! But who decided to let the NISMO into the show?(laughing). Those Honda guys over here in the states have their own scene and they act like God invented Honda. My really good friend in Maryland wanted to name his son "Honda" but his wife said "no.". I love VW and German cars as much as those Honda guys but I haven't needed therapy yet. Our cars weren't involved in airbag recalls either. And no VWs killed anyone! Nice photos! Really want to see more of that Greg/charcoal MKIII. 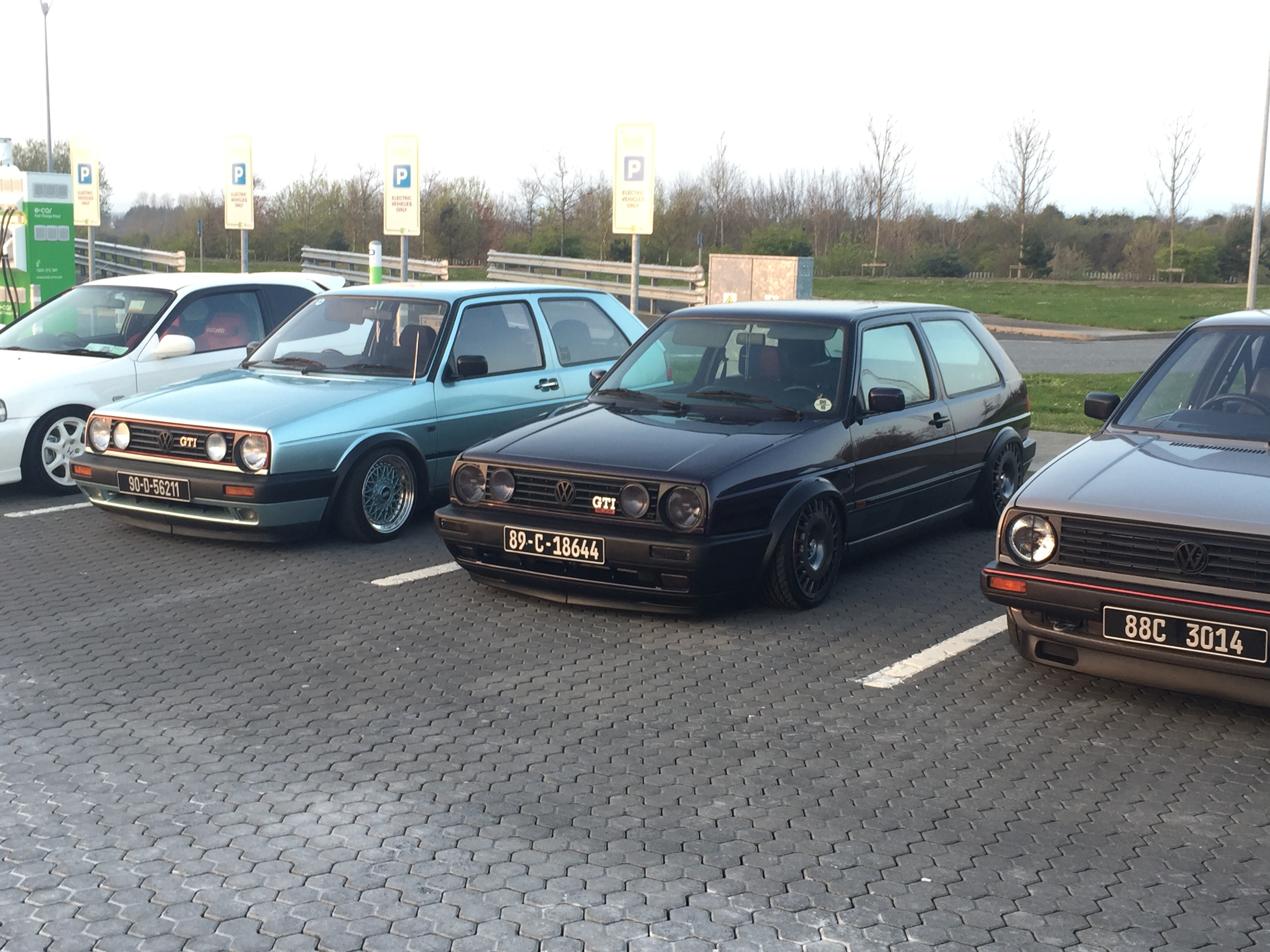