It took a year or two before I did anything with any of it, but eventually I tried my hand at film photography and shot a dozen or so rolls of 35mm. It was good fun, but I never really did much with the photos. Fast forward a year or so, and just a few weeks ago I picked up a proper Canon EF film body so that I can pair all of my everyday glass with rolls of film.

Last Friday when I packed my bags for the Mooneyes Xmas Party at Irwindale Speedway, I reached back into my grandpa’s bag and pulled out that dusty, beat up film cartridge. I’d been saving it for something special. Something vintage, something I truly enjoyed.

I stowed it away in my backpack along with some Kodak Portra 400, just in case I wanted to hold on to grandpa’s old roll.

Upon my arrival at Irwindale’s dragstrip, I instantly reached for that expired Gold 400. Today was finally the day. I had no idea what I was getting as I shot all day; seeing as how the film was from the early 2000s and had a couple of knicks in the seams, I half expected to get nothing in return for my efforts.

Thankfully, after picking up my exposed negatives at my local developer, Bay Photo Lab, everything seemed to have turned out precisely as planned.

Far too much grain, off-beat colors – almost exactly as I’ve been manipulating some of my recent digital work. Mostly a bit under-exposed too, but shooting in the harsh Southern California sun is never smooth sailing, regardless of what you’re shooting with.

Mooneyes provided the perfect setting for me to experiment a bit and get used to my new film body. Photography aside, these guys certainly know how to throw a party.

Having never been to the Mooneyes Xmas Party event before I didn’t really know what to expect. One of my favorite aspects of the whole thing was how many people showed up in vintage attire, something I didn’t give nearly enough attention in these 24 shots.

I’ll give you the proper, expected, all-digital version of this event soon enough, but for now, here’s that expired roll of Kodak Gold 400 in its entirety; missed focus, exposure screw-ups, and all.

Having not shot terribly too much film before, I am only just now beginning to understand the indescribable appeal that so many of my friends have been trying to tell me about.

Where I spent the better part of this roll was on the drag strip, you know, hunting speed and that sort of thing.

Even standing still, American cars from the ’60s just look fast. There’s really nothing else like them in the world.

The same is true of the drivers of these cars, especially when an exposed big block is thrashing away in front of you and unleashing colossal amounts of untamed, analog horsepower with the slightest movement of your right foot.

I actually didn’t mean to take this second shot, but I’m glad I did. Look at that grit and concentration; I’m not so sure I could do it.

It really was a special day for me, getting up close to cars I love and focusing that bit extra on each shot. Actually, quite a lot extra if I’m honest.

Of course, all good things do eventually come to an end. As the sun started heading down I went across the parking lot to catch the cars rolling out.

Looking at these shots from the weekend, I just want to go back. To surround myself with the rumble of an American land yacht; to indulge in the smells of burning rubber mixed with spent ethanol. As with most events involving cars, you really have to experience them in person.

These 24 photos certainly aren’t the best in the world, but due to their source, they have managed to shift my focus just enough to change my own little world. 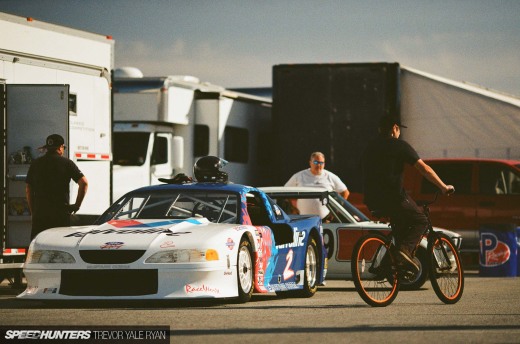 Trans Am SpeedFest: The Morning On Kodak Gold 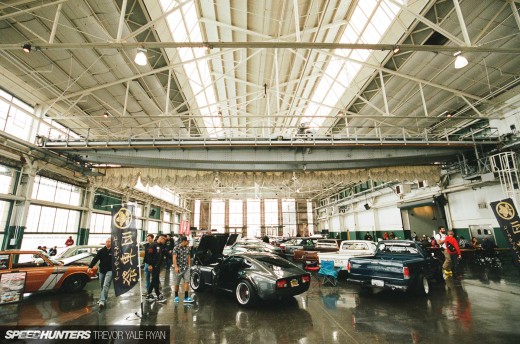 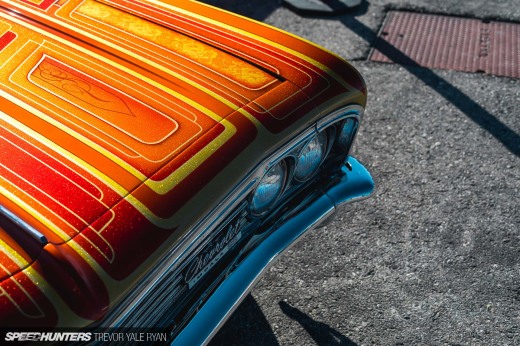 Nice work Trevor! I'm bummed I couldn't make it to Mooneyes this year cause I was at a different event. Which film body did you end up using?

Thanks Antonio! EOS V, pretty capable, more capable than me anyway! Came across a killer deal and had to do it, been wanting to use all my EF glass with film for so long

dope. i was just looking for EF film bodies on Craigslist the other day

As good as many of the digital film emulation programs and plugins are, nothing beats the feel of real film; either from the perspective of shooting on it or the end result.

These are just lovely, lovely photographs.

I think that the most intriguing part about this article is the photography. I love the style of the pictures and how there's a little bit of a slight grainy look to them. Super good job on them, keep up the good work!

Definitely quite grainy for some 400 due to it being nearly 20 years old. I like the effect too though, thanks man!

Brilliant, such a well shot and enjoyable article. I am in freezing cold England and your article just evokes thoughts of California. For a moment you transported me there, Thank You.

Success! Thank you Graham, I appreciate that. If you really want to hate us Califor Ian's, keep your eye out from more from last weekend

Proof positive that it is the photographer, not the equipment, that allows one to capture the beauty of any moment. Here you've taken "sub-par" equipment and yet captured as much and maybe more of the rawness of en event as you would digitally. The photos evoke nostalgia like one expects, given the grainy-ness of the film. And let's not forget the challenge, 24-frames to capture an event, not 2400 or even 240 just 24.

Excellent job. My favorite piece on SH in a long time.

Thank you Rob! Yes, it really is a big difference compared the spray and pray you can do on a digital body. I'm just glad all 24 turned out okay.

You sir, are an artist. I would encourage you to continue shooting analog as i think the limitations challenge yourself to be better. I have no doubt that those skills will transfer over to the digital realm.

I appreciate that Mike. I'll be shooting as much as I can, especially whenever I feature older cars and vintage events.

Honestly looks like you transported us back 30 or so years! Love it Trevor!

Glad you enjoyed it, I'm going to try to make a thing of shooting old cars on film going forward. There's just something right about it.

The film makes this event look even better - great work

I am not exaggerating when I say - I believe these are some of the emotive images I've seen on this site. The warmth, depth, and grain translates well - feels like listening to your favorite song pressed on analog vinyl. Great photographs. This event looks killer too.

Thank you! That means a great deal to me. Mooneyes put on a cool event for sure, I'll have a closer look up soon.

Yes! So stoked you got another film camera, loving these shots. It's definitely time to put together that automotive film how-to please!

Yeah, about time! Ha, I need to shoot a good 100 rolls or so and I'll be ready to share some pointers.

Great content, great images. As someone who uses film for most of my work, I applaud what you're doing. If you love 35mm, get a hold of a medium format film camera and some fresh rolls or Portra, Ektar or Fuji400h. It'll even out perform digital on a bright day (my opinion).

Thank you! Baby steps, I'll stick to 35mm for now haha. First roll I shot with this was Portra 400, second was Ektar 100. Then this one. I'll have a few features coming using some of those images, and surely many more in the future. Cheers!

I planned something similar once (I inherrited a small travel-camera from my grandfather), but it Pretty much ended with the camera, film half-full, on the shelf since there's NO ONE to develop physical film anywhere near my hometown :/

Finish it! You can mail your roll in to most places and they'll mail it back and/or email you the scan.

Awesome photos, thank you! I miss the film photography.