Well, maybe not this model per se – the Satria Neo R3 Lotus Racing was a special collaboration that resulted in only 25 models ever being built – but Proton is without a shadow of a doubt the name behind the people’s car of Malaysia.

Founded in 1983, the stylized tiger head or crescent moon underlining the 14-point star that makes up Proton’s branding can be seen everywhere in this Southeast Asian country.

Proton may have started off rebadging Mitsubishi products in the 1980s and ’90s, but around the turn of the millennium they began to invest more in their own products. You can’t drive more than a few blocks in LA without spotting a Prius or a Tesla; and likewise, Protons are everywhere in Malaysia.

The Proton Satria Neo was always targeted towards young buyers looking for something a little sportier than your average hatchback. Around the time of its release, Proton was still in control of Lotus and was looking for a good excuse to put the British-born automaker’s performance knowhow to practical use, and thus the humble Neo evolved into the Satria Neo R3, complete with Lotus-tuned handling and bunch of other performance add-ons.

With only 50 examples of the Neo R3 being produced, you’d think that Proton and Lotus would call it job well done, and leave it at that. Proton had other ideas though; they wanted to see how far they could really push the Neo.

With caution thrown to the wind, Proton got to work building yet another limited production run Neo with Lotus, the goal being superior handling and fun, all neatly packaged in a lightweight body. The result was the Proton Satria Neo R3 Lotus Racing.

After getting a rare opportunity to test drive one of the few remaining examples that appeared in a dealership eight years ago, Nik Irfan knew after that this was going to be his best chance of owning a piece of Malaysian automotive history. For him, the 115,000 Malaysian Ringgit price tag (around US$27,000 at current exchange rates) was a small price to pay, even if it was more than double the cost of the Neo CPS version.

So what makes the Lotus Racing edition so special? Let’s start with the changes that were performed by Lotus themselves.

For the suspension, Lotus specced a set of Öhlins DFV coilovers with damper and spring rates tuned specifically for the car. Furthermore, the suspension bushes were upgraded and the suspension geometry revised for sharper steering inputs and cornering precision.

The combination of carbon fiber and FRP around the exterior resulted in the Lotus Racing version coming out to play at under 1,200kg, and a full 62kg less than the standard Neo CPS.

The addition of large 4-pot AP Racing calipers and high performance pads ensure that Nik has no trouble coming to a stop when he’s on the track or indulging in a spirited drive on the street.

The original CamPro 1.6-liter inline four that came in the CPS version was good for 125hp, but in order to make it a little more special it was handed over to Proton’s racing division, R3. ‘Race Rally Research’ upgraded the engine with revised camshafts, a titanium header and tuned exhaust system, and with a new engine management system employed the Neo R3 Lotus Racing packed a 145hp punch.

That may seem like a reasonable amount for a small car, but when you realize that the Mazda Miata of the day produced a similar power figure while weighing less, it’s easy to understand why Nik decided to make a few of his own enhancements, which I’ll get to in a moment.

Another important factory upgrade was the revised 5-speed gearbox with much tighter ratios to take full advantage of the engine’s increased power output.

Remember that test drive that Nik took when he first got his hands on the Neo R3 Lotus Racing around eight years ago? Although he was getting a piece of Malaysian automotive history, the desire to make a few changes to extract more performance out of the engine and imprint his character onto the car was too much for him to leave things alone.

With the chassis and suspension tuning being the highest priority for Proton, Nik was confident that the package could handle a bit more power.

With the addition of a Sprintex supercharger, Akrapovič exhaust system, and a Haltech Platinum Sprint 500 engine management system, the 1.6L is reputedly now good for 200whp.

The interior is where more of Nik’s changes can be seen, the original R3 seats having been changed to Recaro ASM, and the Momo steering wheel that came with the car swapped out for a Lotus race item. Defi gauges overhead relay vital engine data, and the addition of a short shifter makes the gearbox nicer to use.

Although the changes Nik has made might have lowered the value of such a rare car in a way that the other 24 owners might not have agreed with, the fact that he did so to extract the utmost potential, all the while trying not to deviate too far from the spirit of Lotus and Proton, makes this Satria Neo R3 Lotus Racing that much more special.

Stories from Malaysia on Speedhunters

This car is so far out of left field that I feel like I'm reading a spotlight on a Grand Theft Auto car. That being said, it is a handsome little oddball from a manufacturer that I've never heard of. very interesting read!

Its a bit of an oddball for sure. But its pretty much a cult car here in its homeland and also the go to car for starting track enthusiasts. Great chassis and a tunable engine, albeit small. 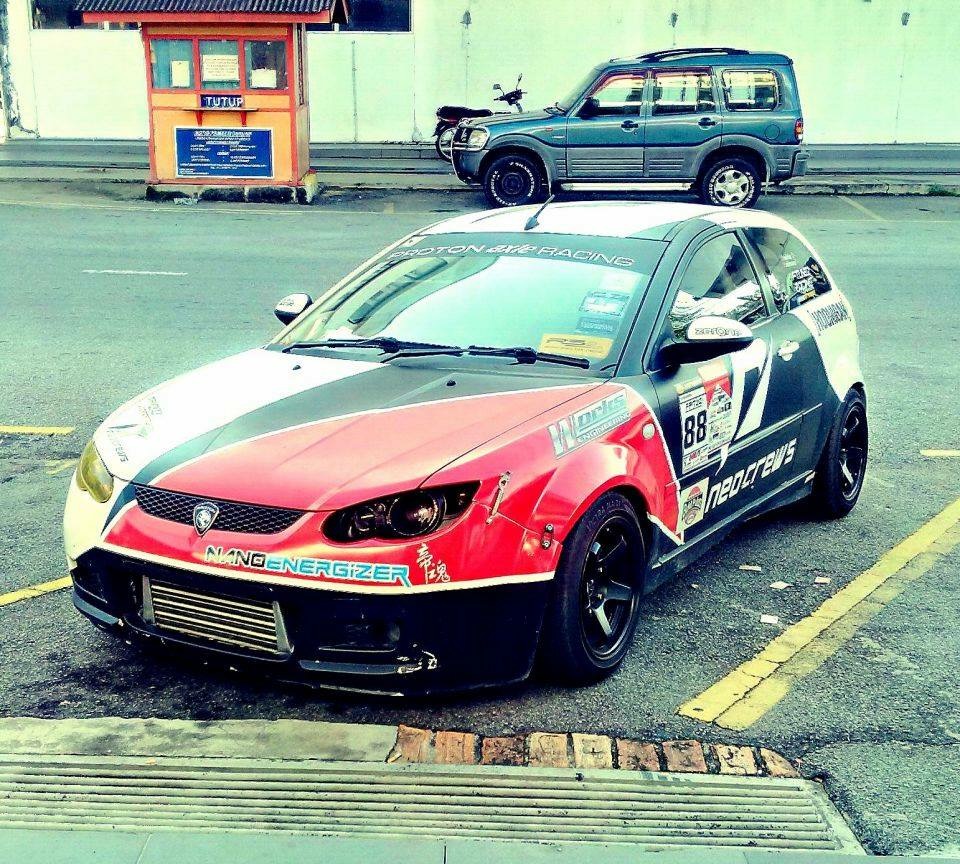 I don't know what they are, but the seats definitely aren't Pole Positions

Haha I was informed of the mistake a while ago. It should be updated: ASM. Glad someone else caught it though

I worked in Malaysia for 4 years and left in 2016. Rode Proton of various kinds and the interior was crude, cheap plastic, yesteryear if not yesterdecade old technology. Even the locals who had money chose to buy foreign cars (Honda and Toyota were the most popular) . Only those financially restricted bought Proton and Perodua with the latter being the much more popular as it was a re-badged Daihatsu.

Hey, I drive a manual Proton Preve. The interior may be a little cheap in construction, but at least I enjoy driving it more than most cars of similar price and class.

We had a burst of the Protons in Australia in the early 2000's. As nice an idea that the supercharger is, its hard to steer away from the fact that a 4G63T Mitsubishi Evo motor bolts straight in this car.

It bolts into the old Satria up to 2006 (Mitsubishi architecture)- It fits but doesn't bolt into a Satria Neo.

Any particular reason for that last photo?

Because culture? Also the colours match fantastically with the colours of the car in its surrounding. Tasty car, tasty food. Sells the story of Malaysia for this particular shoot.

Thank you! I really appreciate it ^__^

I worked in Sunway for a year at a shop specialising in r35s. The car looks the part (albeit feels cheap on the inside) but the Cam Pro engine is gutless!
One of my Malaysian friend has an older Satria with 4G93, haltech standalone (read: launch control), straight pipes and some GTi bits- much more up my street

To be fair the steering wheel is awesome. If the rest of the interior had similar treatment (Aluminium around the air vents as supposed to cheap plastic, flocked dash etc) it would look sick

Also. Anyway to get my hands on the Ohlins dampers?

Cool little car. Looks like a lot of fun.

Isn't it funny how when Lotus setup a car they don't slam it to the floor, they don't put it on air and they leave something called suspension travel. There's no 4 foot wide carbon fiber wing either. hmm...

This car has a "Need for Speed Underground" feel to it.

Interesting licence plate number as well. The front end does look like a GR WRX.

I just came back from Malaysia, every other car seemed to be modified with at least a kit/rims/exhaust package, which was pretty interesting, and numberplates beginning with WRX were very common too.

Wow Ron. I'm impressed. I know exactly where this shoot location is, and you sure know how to take shots that make the car seems like its going extremely fast on such tiny piece of space. LOL!

This car reminds me the days of Burnout

I need to go to Malaysia someday

Im Driving a Ford ST , i had a Proton Satria CPS 1.6 , i had more fun more feeling and better steering position and better cornering better feedback , i think if it wasn't for parts not been available id still be driving this car , that engine with cps really quick strong engine , best weight distribution ever better then any bmw or merc it truly felt like a porsche kaymen i was driving at the time just a bit slower or more slower , remember the chassis is setup by lotus i Loved this car still have it my little brother drives it

This is one of those cars that at first, has a boy-racer look (to me), but keeps me staring until I understand that everything here has a purpose. It looks like huge fun.

Great pics of the color-contrasting food for the cultural tie-in!

Is it me or the front looks like it's "inspired" by the 3rd gen impreza? Not that is a bad thing, but i was like: "mmm,it reminds me of another car"...

Fun car it is. I owned the prior model to this. But this newer chassis if done right has lots of potential at Sepang or local B roads.