There’s nothing more American than drinking cheap beer and screaming at the top of your lungs as a literal monster truck drives over wasted econoboxes that carry us to work each day.

It’s a strange past-time, but one that hundreds of thousands of Americans have been enjoying for decades. It’s been spreading around the globe, too, and maybe even you have been to an event where these gargantuan machines stunt around an arena.

Personally, it’ doesn’t appeal to me. Actually, let me back up; when I was five years old, monster truck literature was the only thing I was bringing home from the library. I was obsessed; the photos of the trucks in the air, the drivers, smashed cars, and flames shooting off from unknown sources. It was incredibly stimulating to even read about, and I can’t imagine how obsessed I would have been if YouTube existed then. But somewhere along the way I grew out of it.

Surprising, I know, but I didn’t really think about them again until early last week when I was walking through downtown Reno for Hot August Nights. I went around the corner, and all I really could say is ‘what the hell?’

Right there on Center and Fourth Street sat Bigfoot #5. A couple guys were sitting casually in the wheel wells, and five-year-old Trevor came alive.

I rushed over to inspect the disgustingly large machine. How did we ever arrive here? How is this a thing? So many questions flooded my mind that had never occurred to me 20-odd years ago when I took an initial interest in monster trucks.

It all started when Bob Chandler, owner of a 4×4 off-road shop, drove over a couple of cars to show off his work in a promotional video filmed in 1981. Apparently, smashing cars brings satisfaction like nothing else and it snowballed into an entire industry of its own.

Silly or not, with 10×4-foot tires, you can’t say it isn’t at least a bit impressive.

To move the 14 tons around (yes, 28,000lb or 12,700kg) a simple 460ci Ford V8 is at the heart of the thing. This makes more sense when you consider that this truck was built in the ’80s. Rotating the giant wheels are 5-ton military-rated axles attached to 16 gas shocks around the truck.

In the middle of downtown Reno, taking up nearly three whole lanes, Bigfoot #5 is inarguably the most massive truck I’ve ever seen.

It is quite a thing to behold, and just so silly, right? Who wouldn’t want to see this thing going off jumps and smashing over the top of cars?

I know for sure that five-year-old me would and, if I’m honest, I’m pretty sure 28-year-old me probably wants to now as well.

For the origin of it's tires, google "alaskan land train".

Yeah, they had this photo on a brochure they were handing out. Ridiculous. Also the hooks on the dish of the wheels are for chains, so it's practical too. 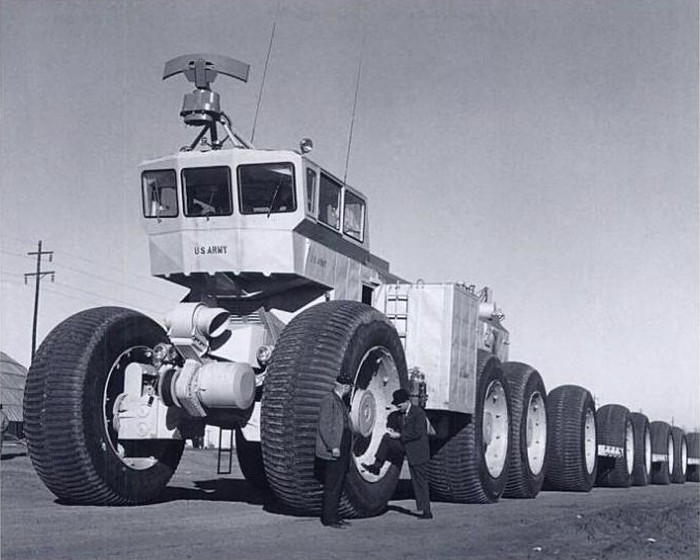 From back in the day I always wondered what those wheels were made for. Thanks.

Simply awesome. Even back when Bigfoot "tundra tires" used to be on the Bigfoot 4 body it was a show stopper. Glad to see this truck still getting out and wow-ing crowds. The growth in this sport over the past 30 years has been fascinating to watch. Anyone who thinks monster trucks are just for entertaining kids is dead wrong, more of a legit motorsport than drifting for example.

more of a legit motorsport than drifting for example

Quite an opinion. No shade towards Monster trucks by any means but would you care to unpack this? In my opinion, they are both spectacle motorsports, with decisions made by a panel of judges often dictating the outcome of the competition (Excluding some of the new tech implemented in D1GP). I just feel like drifting has more of a grassroots following and history, while also developing car control and driver skill that could at least somewhat translate to other car sports. Of course, this is just my opinion, I would just like to hear more of your thoughts on this.

I completely see your point, if we are comparing drifting to monster truck freestyle. And yes, the skills learned in drifting transfer over to other motorsports easier than monster trucks, but let me give you this food for thought. This is all just my opinions of course, based on what knowledge I have. Let's talk about actual monster truck racing, not freestyle.

There is quite a bit of carry-over from other off-road motorsports into monster truck racing. Drivers such as Cam McQueen and Travis Pastrana have brought over skills learned in motocross and off road racing, such as tapping the brakes when mid-air to settle the truck, and timing landings. Being able to judge the track surface for the quickest cornering during racing as well. There is also carry over from drag racing. Older drivers such as Alan Pezo or Tom Meents that cut their teeth in drag racing, or mud-drags, know how to get good RTs which are critical in racing, especially on shorter tracks were ETs can be 6-10 seconds. Longer races such as Sam Boyd Stadium's World Finals setup, races are over 16 seconds. One last point, I believe the engineering into the drivetrains and chassis has shown some amazing progress over even the past 10 years, what the guys are able to do reliably in these trucks is incredible.

So anyway, sorry for the long winded response, but that's where I'm coming from! Hopefully my facts are right haha, cheers

Hmmm definitely some very solid points. I hadn't really thought about the drivers or athletes that have come from other motorsports platforms to make a go at monster truck racing. I appreciate the insight, I always enjoy talking about different perspectives on motorsports.

I wore out a VHS of Monster Trucks and Tractor Pulling when I was a kid. God knows where my Dad got it from here in the UK but I loved every second.

Got to see Grave Digger up close years ago. Monster trucks are awesome.

LoL'ed at the roll of paper towels between the front spring hangers.

Oh my gosh, I remember seeing this car and it is insane!

Being in Australia I never really got into monster trucks as a kid. Then last the monster trucks from the US came to Sydney and my missus thought it would be a laugh and surprised me with tickets.
All I can say it is way more fun that you can imagine. I became a 37 year old 5 year old within 5 minutes. Highly recommend it to anyone even remotely interested in big motors or destruction.

It would be interesting to see a story on the evolution of monster trucks from the beginning. I was obsessed with them as a 7 year old but kind of forgot about them as I got older.

It doesn't appear to have any steering does it?

There are hydraulic rams on the back of the axles that control steering from what i can remember. They dont use a typical steering box due to the strain of the tires.

And i do believe this has 4 wheel steering like most monster trucks.

My reintroduction to monster trucks came through my son. He loves the things we've gone when they come to Toronto every year since he turned one. They put on a fantastic show for kids.

Bigfoot #1 was my favorite when I was little, even had the toy.

Plenty of time playing Bigfoot -the game- in my Nintendo NES back in the eighties... ^_^

What kid of the 80s wasn't enamored by any of the Bigfoots? I still think there is something very cool about them.