The name Santini was vaguely familiar to me before I met up with Eddie Perez to take a look at his second generation Toyota Supra. It turns out he snuck along a MkIII and MkIV as well, but I’ll get to those in a bit.

For now I want to focus on Pete Santini, who originally painted this car in 1987. Santini Paint & Body has been alive and well in Westminster, California for over four decades. Santini’s work has been featured on more than 20 SEMA Show builds over the years, and he’s sprayed everything from motorcycles to hot rods to the Supra you see here.

His workshop is still active in Southern California and just months ago he did a bit of touch up work on Eddie’s Supra, along with a matching job on the new engine under the hood.

Eddie says that when Santini saw the car he was amazed that it was still around. For 30-year-old work, it’s held up phenomenally well too. But what strikes me most about the paint job on this ’85 Supra are all the little personal touches and details that were worked into it.

It all starts here…

And continues through the back end and around the entirety of the car. The creative design and color palette is so 1980s, and it works so well. Whoever wanted to do this in the first place definitely had some gonads; it’s a bold statement and something you would expect to see from this era alone.

The whole package is very tidy and complete, playing nicely with the molded bodywork. An honest car, I wanted to experience it at an honest location, so we met up at Bob’s Big Boy in Burbank, the home of many meets in this area.

But the Supra is hiding something. As charming as the car is to take in, there’s a big hint up front that a lot more is going on here.

That something is a 2JZ-GTE that’s been swapped in by RAD Industries.

While certainly not the first time a 2JZ motor has found its way into an older Supra (in fact, a couple of Eddie’s friends showed later, one of whom had also done exactly this), this has to be one of the coolest examples in existence.

I love that Eddie appreciated the original custom paintwork enough to go to the man himself to have the valve cover matched up. Santini’s attention to detail really shows and the quality of his work is as good as ever.

With the fairly straightforward swap, the Supra — or should I say Toyota Celica Supra — has been really livened up by the new twin-turbo powerplant.

It’s a conventional recipe that’s been applied to a car that is anything but.

Inside the car you’ll find that almost nothing has changed.

As with the exterior, the interior is surprisingly clean and intact. With the period-correct paintwork on the body there really is no sense updating anything. It’s really quite nice as it is, and certain details, like the stock gauges, really spoke to me for a reason I can’t quite place.

I’m just stoked that this car ended up in the hands of someone who appreciated it for what it is.

I really hope that this paint job stays exactly as it is forever.

As I mentioned, the singular Celica Supra just wasn’t cutting it for Eddie; with the help of his wife a couple newer generations showed up. It all started when Eddie’s son started driving and the 16-year-old wasn’t so hot for the out-there look of the ’85.

Being the cool dad he is, Eddie picked up another Supra for his son, and like the MkII, his MkIII is a bit of a time machine. Although, the factory theme is much stronger here with the original motor retained along with the factory interior.

While not exciting from a modification perspective, it’s just nice to see that there are unmolested examples of these cars still around. If you’re wondering about the bra up front, it’s wearing this while some damage to the bumper is sorted by insurance companies.

Of course, you might as well complete the set.

As you might have guessed, not much has been modified on this car either. But even more than the MkIII, the JZA80 Supra is a car that doesn’t need it. With lots of TRD goodies from the factory, and some which appear to have been added later on, Eddie’s is a really good example.

Seeing the three cars together in the lot where Supra meets are normally held was one of those simple and yet so satisfying moments. Over 20 years of Toyota’s design work and engineering was on display.

Being the meet spot for local enthusiasts, what happened next shouldn’t come as a surprise.

Eddie had invited a few friends and their cars along to hang out and talk about the local scene.

A 1JZ-powered MkIII and an SR20-swapped S13, to be exact. If you stare long enough you’ll notice the hand-painted hood, which has nothing to do with Santini and was found as-is, reads ‘1JZ.’

The guys promised that if I give them some notice the next time I’m in town they could fill the expansive Bob’s Big Boy lot with Supras. It certainly sounds like something I’d be interested in, and it just goes to show how unifying car culture is.

I need to amend a statement I made some time ago.

I love this! That paint job is wild! reminds of the old school trapper keeper binders.

Reminds me of Saved By The Bell.

hey Trevor, if you wan to see another nicely done MKII Supra in California, look up Roger Reyes. he has a bad ass Yellow MKII Supra!

SO. VERY. RAD!
Please tell me this is going to Radwood!

By what brand is the wing on the s13?

Great read, the Santini Supra is something I wouldn't have expected to appreciate but it looks great in your pics, and the narrative progression of adding in more cars one by one, all interesting, works great

that paintjob is literally RAD!!!

Good piece. I'd really like to know the tire and wheel specs on Eddie's Celica Supra. The package looks great. I'd want something similar on my 85....with no mods if possible. Tire size? Wheel brand? Width? Offset? Etc. Thanks

That paint job is really cool! I wish more people painting their cars, would really embrace the colorful, gaudy 80s. I myself, like to keep my cars looking pretty low-key, but I sure love looking at these works of art. Great, positive write-up goes nicely with the sunny vibe of the feature car too.

Total flashback to the mini truck scene of the 80's. I remember seeing so many intricate paint jobs at car shows and meets in my old skid days.

Thank you for this great read on a Sunday morning whilst sipping my coffee!

That paint job is seriously rad. What ever happened to cool factory graphics???

You only ever see graphics on "retro" styled cars these days really, fiat 500 and BMW's Mini though Mini doesn't have the "fun" graphics like it used too when it was first released, everyone's trying to push upmarket and apparently people don't want that stuff. Which in fairness is kinda true, I haven't seen a 500 with a Zip or other stickers for a while. I think manufacturers think the stickers date the styling of the car faster than the design would age without them, so generally don't do them.

Super cool stuff Trevor! I really like that side shot with the three Supras where you can see how they changed over the gens. It's also interesting to see just how slimmer the cars were and just high off the ground they look, even when lowered(I think that's more of a body kit thing than anything other). They also looked much more elegant and different, not like the cars of today which are 99% all the same, just diff badges lol

The paint job is a super nice throwback to the 80's. Really wish people would paint their cars like they used to or at least wrap them in something like this. Not those animal, chrome, stickerbomb and fake carbon wraps. But, I guess, not manypeople have the will to do it or the skill for that matter...

Santini is a painting legend, and the style is straight out of the '80s Pro Street, street rod, and fairground cruiser scene. I remember that from car shows and magazines well before I was old enough to drive.
It's so cool to see such a well executed example like that after so many years. What an amazing wave of nostalgia.

Oh wow! The memories! I had an 84 Toyota Supra I bought from a friend. It had 160,000 miles and when I purchased it, it had been in a minor accident. The front A arm on the passenger side but a curb and literally tore off the frame. I had it fixed and aligned by a good body and frame shop. First time I drove that car, it felt like a new car. Quiet, smooth and so so fast. Not one squeak or rattle. Stayed straight on the highway and a total joy to drive. I loved the look of that car. It was so sleek. All black with rear window lovers and rear spoiler. Front also had an air dam and the fog lights. Everything worked on that car. Even after 10 years it felt like it came off the new car lot. I had it until 2004 when I was traveling down i17 in Arizona and right at the Indian School exit, the timing belt snapped. I had it towed to Shamrock Towing where tbe storage fees took a huge bite out of my wallet. I ended up losing the car. I look back now and if I had the opportunity, I would pay that auctioneer anything to get that car back. It was an awesome car.

That's a phenomenal paintjob! It would look pretty sick parked by the beachside in Miami, with the sun setting low on the horizon...

And I certainly did not expect to see auto air-conditioning for a car from the 80s. Is that even a factory fitted thing?

That 80s paint-job is absolutely amazing. Stood the test of time exceptionally well!

Eddie i hope you find an MK I to add it to your collection.

Only thing I'd change is the wheels for a more period correct style. Here's what it had on before these giant ones. 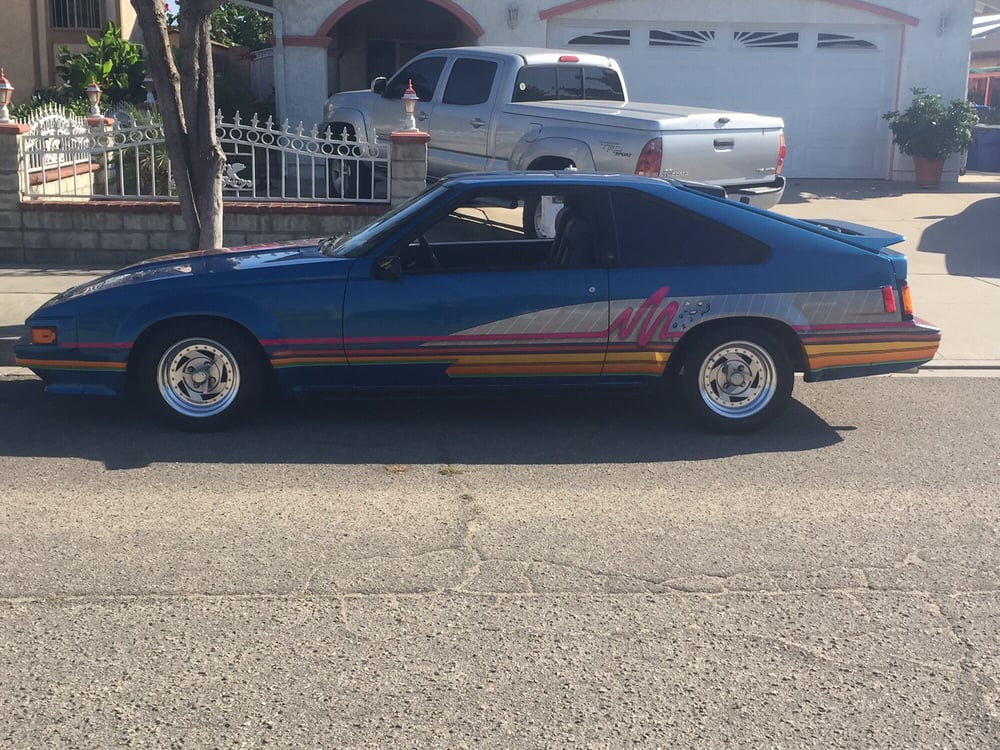 I was thinking the same – the big wheels look odd paired with the awesome 80's paint! It's held up amazingly well – obvs it has 'dated' but that's the whole point, it was so well executed in the first place it still looks cool.

More info on his buddies mk3.

I appreciate the artistry in the design and execution, but the look isn’t for me. There’s a reason this look fell out of style once, more reasons why it fell out of style at the end of the FnF era - it is not a timeless look, and it won’t age well. This Supra will be repainted in a few years. Some people like doing that I suppose, but it’s not for me.

Again though, great execution of the look.