As my eyes locked on the metallic bronze Porsche 996 at the front of a massive line up of cars entered in the Idlers Club event at Tsukuba on Sunday, I found myself pondering this very question.

The Old & New conversion is one that’s popping up more and more in our coverage, and now that I’ve finally seen the 996 offering it makes a hell of a lot more sense.

The 996 generation of the 911 comes from an interesting time in Porsche’s lineage. This is the model that marked the move away from air-cooled engines, but also one that received a lot of criticism for its design.

Yes, I am talking about the headlights. Their ‘runny egg’ or ‘peanut’ shape cemented the 996 as an instant love-it-or-hate-it iteration of Stuttgart’s iconic sports car.

So I really have to ask, does eliminating the headlights altogether – as the Old & New kit does – take the 996 out of the ugly duckling category? This is something I want to put to you guys, as I personally have never been too fussed about what the front of the car looked like, especially when the high performance versions are so good.

So it’s a matter of substance over style, for myself at least.

That said, the slant-nose conversion really does work wonders for the car as a whole. I think the Old & New guys are really onto something with this 996 kit; think about how many unloved and cheap runny eggs there are out there waiting to get chopped up and transformed.

This car is based on what looked like an entry-level Carrera. This is possibly the cheapest way to get yourself into a 911, yet here’s one that’s been given a new breath of life and is now enjoyed on the track by its owner.

Just like the Old & New 997 body conversion there are screwed-on rear flares to pump the hips, while the single-piece, headlight-deleted wings balance the look up front.

19-inch Barramundi Design Hystrix wheels are fitted all four corners, their deep lips a good match for the overall look of the car. The rears were running 305/30-sized Hankooks to help fill up the arches.

The biggest difference compared to the 997 kit is the lack of a rear bumper; it just all seems to end at the overfenders which sort of leaves it a touch incomplete. I don’t know if that’s the choice of the owner of this car as the Old & New website still doesn’t list the details for the 996 conversion, but maybe there’s a bumper and he just didn’t want to fit it. There was also no rear wing, which I kind of liked.

The cabin is simple with just the addition of a bucket seat for the driver and factory options like the full carbon pack.

So it’s over to you. Would the availability of a slant-nose steer you towards getting a 996 if you were indeed a hater of the headlights?

The owner of the car actually has an RWB 964, so maybe this is just a fun daily driver that he can occasionally take to the track. In case you’re wondering, I’d rock one, but I’d definitely have to get those front louvers integrated into the fenders. 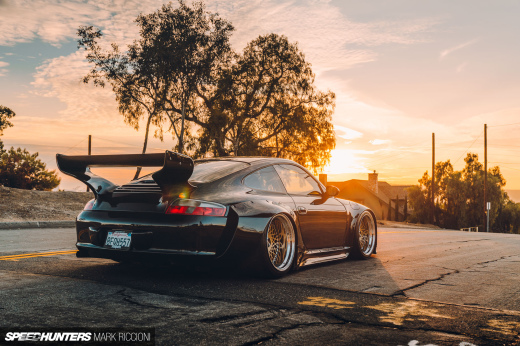 The Subtle Art Of Not Giving A Damn 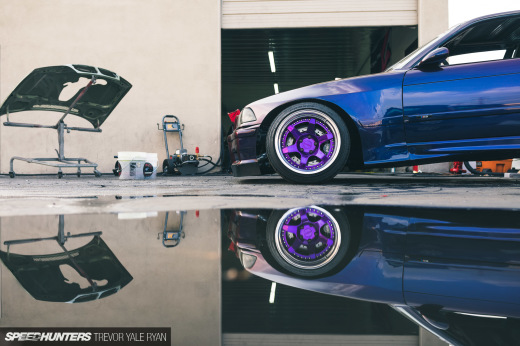 Love It!! The only thing that distracts are the wheels, they look too much like something on a Mercedes - needs a more race-style wheel. But the rear bumper, louvers, and sans-wing don't bother me at all...

I really like the rear without a big wing or diffuser, it hits that coupe look perfectly from the rear 3/4.

I've always thought that there are really only two dead-nuts solid indicators of a flawed design.

1 - The nose is higher than the tail.

2 - The car looks better as a convertible with the roof down.

How did you know!

I can't get behind your position but at least you are consistent.

Yeah same, simple is best when there's so much else going on visibly on other areas of the car

It kinda works, although impractical for road use. To be honest, I think the 996 is starting to come of age – add a few GT3 bits and they can look fantastic.

Or better yet, buy a GT3 and win at life.

I'm with you there, a faux GT3 is the best treatment for a 996. I'm still not convinced I could own one though. They just feel so sterile.

Turbo please! Larry has got the right idea lol

I wouldn't mind a 996.2, even without modifying the look. .1 maybe not so much, but I'm far from "hating" it. Part of me gets really annoyed when owners stick GT3 or other top-trim parts on lesser models, but there's no denying it looks great.

I love this *so* much that I'm now scouring Craigslist for a good, cheap 996. Holy moly, this is everything.

I've done this twice already in a few days. Pretty affordable in Japan...

All Neunelfs are great, but no wing is a huge turnoff. The 991.2 kinda pulls it off though it's clear that GT3 RS looks better than GT3 touring.

I personally never disliked the headlights. My buddy picked one up, and I like it.

Wish carrera's were cheap here in Australia, they start at 40k

Everything is crazy expensive in Australia! What's up with your water there anyways, I can get 500ml bottles at Japanese convenience stores for 98 yen 1.1AU$

I don't know about the lack of headlights, but those fog lights remind me of the 2000GT, and that's a very good thing.

Those are the headlights

Being that low, though, aren't they functionally fog lights? Output distance is limited.

The older I get, the more I appreciate the 996. I used to hate it, absolutely hate it. The so-called 'runny eggs' headlights used to make me taste what I ate for breakfast again (usually eggs on toast), if you catch my drift. Now that I've reached the ripe old age of 25 I really like them, and I believe a 996 is the one to buy (price-to-performance), especially a Turbo. Most people still don't appreciate them, so they haven't been hit as hard by the Magnus Walker tax, however if sentiments on various forums are anything to go by, this will surely change soon.

With that being said, I'm not a fan of this kit. I love the original 911SC, but this kit just doesn't work for me. Perhaps it'll be like the 996 and in another 25 years, I might like the kit... However, I am doubtful.

Where do you live? I want to make sure never to visit, if the water is so bad as to affect life expectancy that much.

Finally!! Finally one of those old and new kits, that scream "RACING", not in a Porsche on air and a show and shine event. Absolutely love it.

I'd buy a base 996 if I could ! I don't mind the styling, the general shape of the car still is a 911, so I don't mind the headlight. A few tweaks here and there (a good set of wheels and a small drop) and this car looks great IMO. Not as sexy as the older or the newer ones maybe, but still much better than the average car, and performance wise it's still an awesome car to drive around (better than my 406 coupé at least) !

I love though I may skip the false louvres (and I have a 996.2). Not sure how the cooling works with the lights where the openings were...

They aren't actual openings, just a design thing. I reckon they should not only have been functional (as you say not sure what you'd use them for) but also integrated rather than screwed on

Yes, Dino, completely agree. Mine uses the centre opening purely for the 3rd rad - looks like this one will get hot! Still love it though.

I think it looks great - and I have a 996.2. How does the cooling work with the headlights where the old opening were?

I love the 996 Turbo. The headlights are what attracted me to it in the first place.

Too bad that that kit is illegal in Germany.

Love it that’s Defo my favourite Iv seen so far , who makes this kit or is it custom ?

I love the Old & New kit because it reminds me of when I first saw a slant nose Porsche on Miami Vice way back in the 80's. I really didn't care for Porsche until I saw the slant nose. It was a great exotic car show BTW. O&N achieved instant nostalgia with me with. The louvers make me think this example is a WIP. I read that the kit sells for $14k. If I could afford the car and kit I would totally do it. Like this example from The Chronicles website. 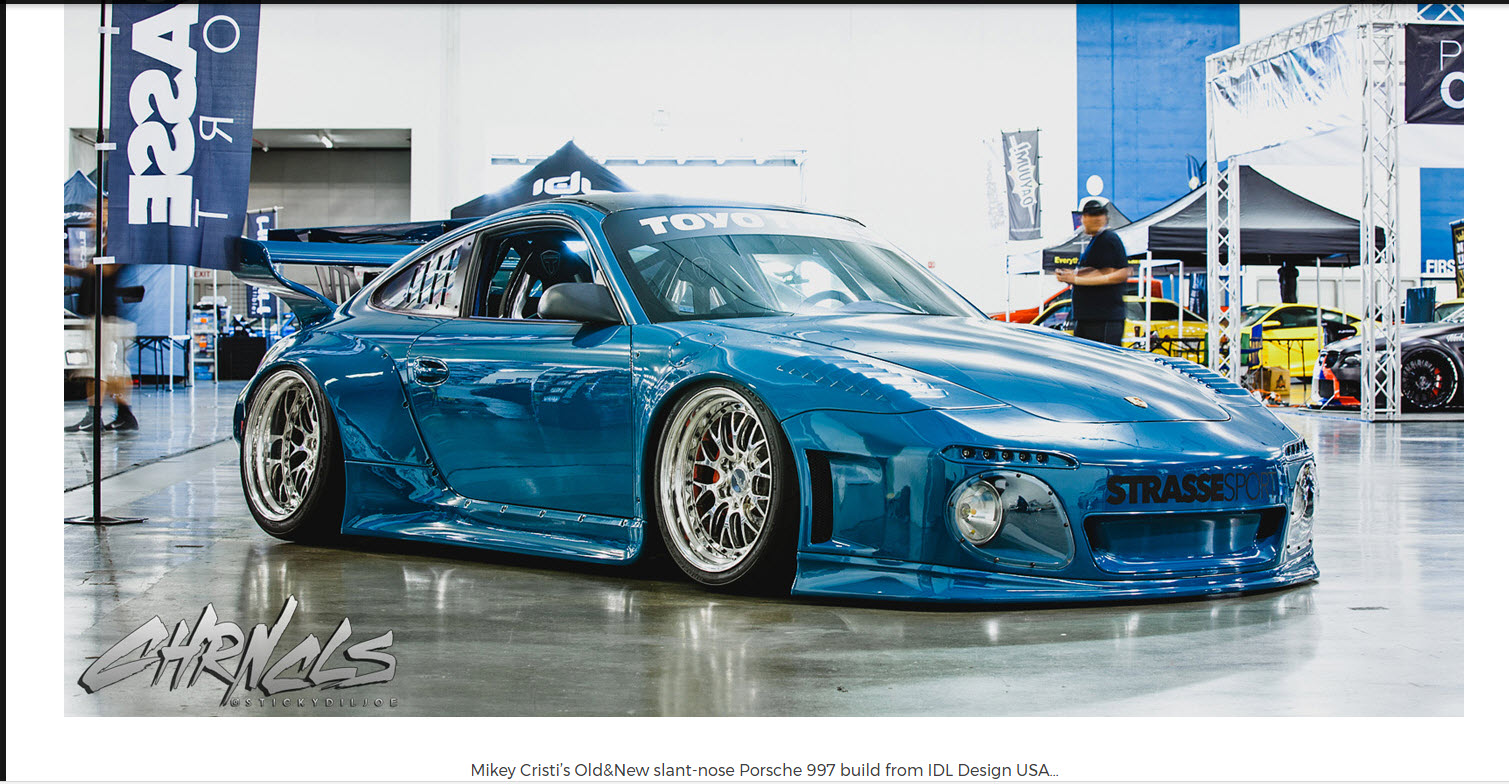 I like every thing except the louvers; if they were REAL then they would be cool. They would ALSO look better if they were integrated into the fenders. Still, I dig the whole car.

I am with you on integrating the louvers. It would be nice to see the fender bolts hidden for a cleaner look but my 944 is 4 shades of red so who am I to talk about clean. The flachbau style really brings new life to the 996 as I am not a fan of the runny eggs; but I would still appreciate being able to enter the world of 911's with one and have no reserves about modifying/improving.

live in Colorado. my favorite 996 is the C4S. its got a few body upgrades that just make it look so much better than a stock CS. would love to have one of those.

The kit is $14,000 but it does have a wing and a rear bumper (or at least a lower piece that ties in)
I love it but a body kit that is more than the car...I don't know

Honestly, it's the First time in seeing one of these Slant nose conversions on modern porsches that i actually like ! I don't know if its the monotone paint or the 996 body lines but i really like this one !
And that rear is really really good !

Personally I don't like the 996 in any of its shapes, and this is no exception, but hey, the dude owns a Porsche, and he ain't scared of bashing it, so, good for him, cars are meant to be driven.

gross, but not my money

Porsche 911s are unusual cars in that the only thing they really need to look good is a big rear wing.

The design of said wing matters less that the fact that there's a structure out back that makes the rear end of the car higher than the nose.

That's it. No blown out fenders or body kit - just a rear wing.

Would rock the sht out of a 996 GT3. Not a fan of 99% of aftermarket body kits though-more available for people who are.

I'd rather a stock 996 C4S with the wrap around taillights. The 996 front end is better with age, it was just that the 993 was so pretty that made is seem so wrong at the time.

The kit does wonders. It should have been a 996 kit from the beginning. I agree about integrating the louvers into the fenders. Maybe even making them functional. I would also like to see a possible wing option for it or even the full kit.

This is definitely an improvement. The stock headlights really do ruin the car for me usually. I do wish the front overhang wasn't so large. The car looks a little front heavy with this conversion but it is still good looking and a huge improvement over stock for me.

Lol, because we all know how front heavy rear engine cars are. Who the fuck is commenting on this stuff?

Overall I like the styling. I agree, ditch the faux fender vents, or make them functional. Deep convex turbo-fan wheels and a ducktail would make it for me.