For last year’s D1GP series, Fujino was behind the wheel of a 2JZ-powered Nissan 180SX, but this ‘second car’ he brought along to Rev Speed magazine’s Hyper Meeting last weekend defines what I think a proper S-chassis build should be.

It’s also testament to the way the Wisteria/Toyo Tires team builds their cars: a great fusion of street style merged with the sort of no-nonsense motorsport approach we’ve come to expect from pro drift machines, even ones coming out of Japan which at times have been criticized for their lack of attention to detail, especially when it comes to the safety aspects.

But the thing that made this 180SX so right for me was the driveline, or more to the point, the ‘SR20VET’ engine.

Swaps are cool, but engines built with a concrete theme get even more points in my book. The SR20 is not only the engine you’d expect to find in a fully-built RPS13, but when it’s pushed to the tuning extreme like this one has been, people take notice.

This stroked beast runs a SR20VE head which introduces variable valve timing for both the intake and exhaust cams allowing fine tuning for a flatter torque and power curve. So you still get the horsepower, but without sacrificing mid-range pick up and response. A Trust TD-06SH-25G turbocharger was chosen for boosting duties, with the engine being fed through a GReddy intake plenum and an upsized throttle body.

The car still exhibits that weird D1 stance where the front ride height is kept pretty high and the wheels extended outwards with all the wizardry going on in the geometry and knuckles.

It was cool to see the 180SX using GT-R 2-pot rear calipers; more points for keeping even this small detail in the Nissan family.

The time when Japanese D1 cars made you wonder how safe they’d be in an accident are well and truly gone, this 180SX featuring a roll-cage on par with what you’d see in other pro machines around the world.

But the coolest detail for me was the fact that there is actually no dash display, just a single GReddy Sirius Vision projection-type EL gauge. This little thing can display oil temperature and pressure, water temperature, fuel pressure, boost pressure, voltage, and three additional auxiliary readings (1x pressure, 2x temps), which makes it pretty much all you need for a race car. I guess a tachometer would be useful, but since these guys spend more time bashing the rev limiter rather than trying to figure out where the fuel cut is, it’s a minor omission.

Seeing cars like this one make me feel like I should check out some D1 Grand Prix rounds this year to see how it’s all evolved. Who wants to see more D1 content on Speedhunters?

Good work Dino! You are a master! I love your work. I hope you can cover more D1GP cars and perhaps feature Daigo Saito's Corvette? Thanks and take care man!

And no clickbait crap like that L28 S14 article

Asides from the fact that it wasn't click bait since the cover photo gave the engine away....if you did not appreciate that car, you should probably stick to Hoonigan videos and Monster Energy caps. CRINGE.

Titles like that are stupid and belong on Jalopnik.

maybe some covering of the King Of Nations when nearby your place Dino-san !

Honestly, I'd prefer if you covered D1SL or Drift Muscle...

Definitely cover D1 Lights since technically street cars are involved. Drift Kingdom is now called Drift Kingdom so the 2 ridiculous names this series has had warrants not covering it..

Yo ,Dino, we want AS MUCH D1 AS POSSIBLE!

That won't happen. It's a really difficult organization to deal with.

Well, I said "as much as possible", of course you have a program and cannot stick always with the competition

Yes, more D1 coverage! Some of the most interesting builds are in D1 but everyone seems to ignore the series due to the politics involved.

Well that's it. Not only that, I got pushed around and shouted at last time I was there. I'm not up for being treated in that way. I'll shoot the cars, but the rounds I can probably try 1 and see how it goes

I still follow the D1 drift series as much I can from the Netherlands. Don't understand any words they're saying just for competition and the cool cars. Stoked for FD as well starting next weekend! Guess I'm kind of a driftnut just think it is one of the coolest motorsport forms around! So yeah more D1 more better!

Any idea what bodykit it uses, Dino?

I wanna see the the D1Fd

That build is ridiculous. Japanese drift style totally on point.

That shade of blue also photographs quite nicely.

Yes more D1. Their lack of covering in this side of the world is really unfortunate.

And I actually like if we get article like D1 history, or even what happened with the old D1 cars of the past? Do they get discarded? Do they get upgraded? I remember cars like HKS Altezza, Blitz ER 34, Apexi FD and list goes on.

All that money and a TD06? What's the point? Why build amazing engines and then put a beyond outdated turbo on it

with a ve head you can get away with it. I ran an efr7163 to start with on my vet and it was ridiculous how early it came on and the whole way to 9k

a current generation turbo will have better response and far more power capability than a TD06
To put it in perspective a Generation II GTX3076 has the power capability of a GT35 but the response of a GT3071
I just do not understand why the Japanese do this so often... And keep MAF sensors where they really shouldn't be. At least this one is more updated in that area

I once tried an R32 GTS with an SR20 built for some parking fun, as I remember it was a non-turbo engine. The SR series is well underrated until you experience it, i was surprised by the amount of power that nearly stock engine (only intake and exhaust lines were changed) can do. Maybe it's not enough for D1 use but sure it's more than enough for grassroot/parking fun.
Always a fan of D1 TOYO Team, nice looking cars and i have a soft spot for TOYO.

I've actually seen a few SR swapped R32's, they're not that uncommon actually. Still a weird choice though.

Well not my own vehicle, it's according to the owner and he was insisting that's the engine it's a stock SR20. The car was a bin of parts so i tended to believe him even if i wasn't totally convinced so maybe he was mixing the SR series with RB series or the engine was build and he thought it was in stock form. In both scenarios, i lack the experience with both SR20 and RB20 NA so i can only confirm my smile while driving that thing.

Is it a rally car?? Suspension setup looks like

More content on D1GP and also SuperGT would be welcomed

Guys read about "Forvard Auto" team from Russia. They are based on S-chasses and SR20VET enginees. Yellow Silvia belong to Georgiy Chivchyan (Gocha) , he was on FIA and D1 with the second best Russian pilot Arkadiy Tsaregradtsev (Arkasha). Forvard Auto also best in SR20. instagram.com/forvardavto 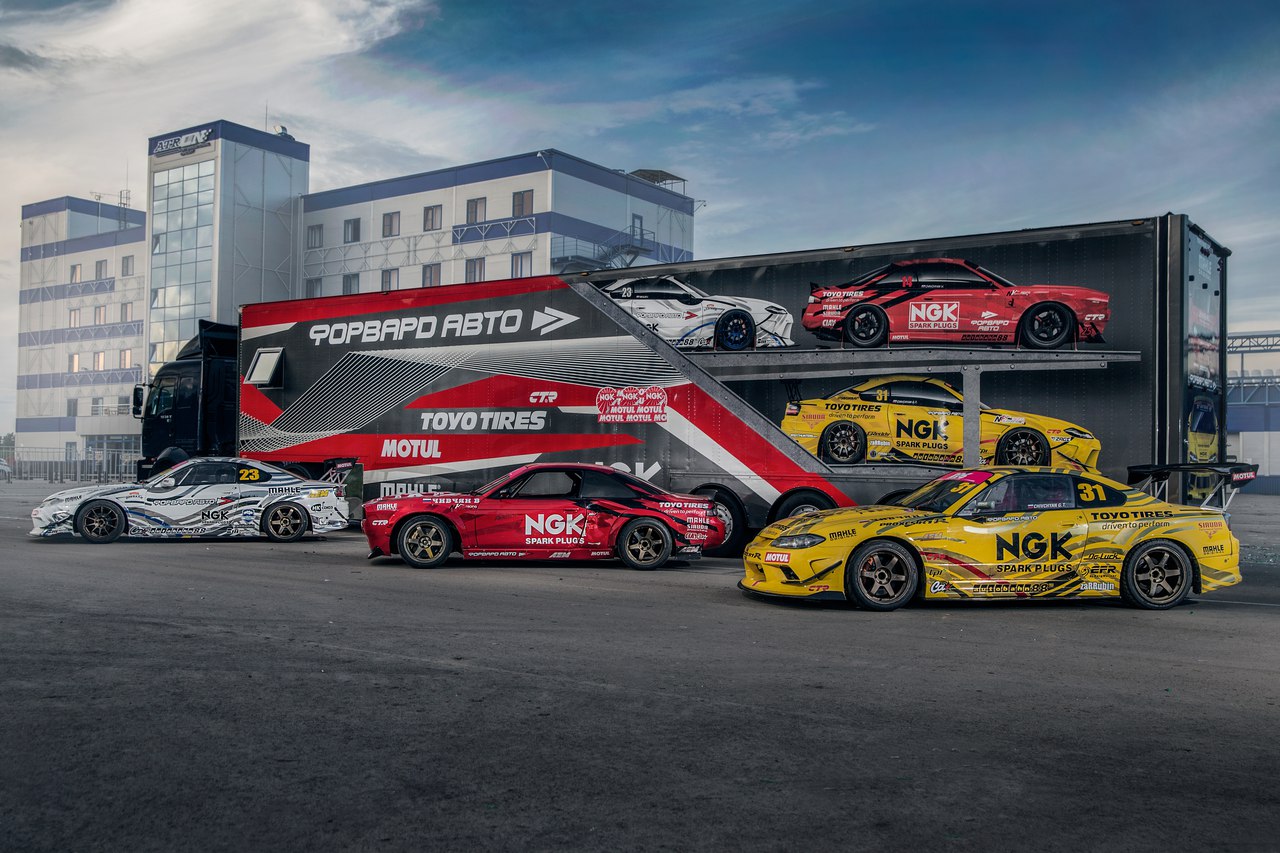 That truck and the team colors are awesome! Super pro.

Dino, you should come visit the 240rs Maxi