Last weekend I found myself at Mazda Raceway Laguna Seca for the second time in two weeks.

During the first visit I was fortunate enough to take a few hot laps around the circuit at the end of the day, an experience that was much more amazing than I anticipated. Just from the few sessions I had on-track, I can ensure you that this road course is nothing short of extraordinary. So, what better place to host a league of Nissan legends than here?

That seems to be what Skyline Syndicate thought as well, and they coordinated another very successful R’s Day alongside Northern California Racing Club’s track day.

Like Laguna Seca, all R-chassis cars deserve a certain level of respect world-wide. When you take into account that the older models of this car were never sold here, anyone who has one in the States has really gone above and beyond to acquire it.

We’re better than some countries, but getting an automobile imported that wasn’t originally sold Stateside can often be more of a hassle than many are willing to deal with. Besides very limited ability to inspect and select cars, you also have all the strict Federal laws and regulations that further hinder your ability to simply ship a car from overseas.

After you jump through these hoops, there are still the hurdles of local emissions regulations and inspections to get over if you want to be able to legally drive these cars on the street.

As such, the Skylines here in North America are scattered around the continent, each owner settling on their own way to get the car imported and street legal.

Due to this, it certainly wasn’t just the original body styles that came out to play.

The R35 chassis was also represented in full force, from track-prepped monsters to Liberty Walk-kitted cars.

Even though this event was here in California, the attendees were from all over. I noticed Arizona, Texas, and British Columbian plates, just to name a few. A good handful of guys made the trip north from Los Angeles area as well.

All to convene at this amazing racetrack, in perfect California ‘winter’ weather, with their families and friends, and revel in the glory of the Nissan GT-R with Skyline Syndicate and NCRC.

NCRC has a lot of experience running track days, and this one went off without a hitch. I was thankful that I was able to find time to come to this awesome event, where the only actual issue was getting all these Nissans past the sound booth.

As I’m sure you’re aware, Laguna Seca is essentially owned and operated by a government agency which leads to some interesting regulations. The public input of wealthy individuals who have moved to the area is quite heavy here, unlike other privately-owned circuits.

It’s also worth noting that these new neighbors to the track moved here long after the track was in operation, knowing full well that people would be driving in anger right over the beautiful Monterey Hills they settled in.

At any rate, this has resulted in an awfully low sound limit for the track: 92 decibels. Looking around the internet, I found that leaf blowers and blenders can come in at 90 decibels, to give you a bit of perspective.

Nevertheless, there weren’t any Skyline owners who were discouraged by this — after all, this is supposedly the land of the free and home of the brave, right?

While Big Brother may not have been excited by the noise of all the RB-based motors tearing up the back straight, proudly announcing their presence to the valley at wide-open throttle, I certainly was.

A few guys (this being one of them, for some mysterious reason) had their event cut short for blowing by the sound booth in Turn 5 with astronomical noise levels, and at least one entire session was black-flagged due to the melody of all these GT-Rs.

This didn’t really seem to bother anyone, as we were all having just about as good of a time in the paddock as on track.

Nissan enthusiasts crowding around each other’s cars, getting a closer look at what all their friends brought. Of course, every generation of the car was healthily represented; even a handful of the less-seen R33s made it to the track.

While not ultra-rare, the pre-2007 GT-Rs are still somewhat few and far here in the States. Sort of medium-rare, if you will.

It’s clearly not all that often that I spot one of these older-generation cars in the wild, which makes it even more of a special experience when I do come across one. This time out though, was a bit different. R’s Day was absolutely R’s overload.

As many of my fellow Speedhunters have described, it’s easy to begin to almost tune out even the most amazing cars when you find yourself surrounded by dozens of them. But due to the quality of builds that I found myself in the middle of, this didn’t happen.

NCRC and Skyline Syndicate’s event was full of cars that were seriously, very, very well done.

All day long I found myself still running around excitedly snapping pictures as I inspected the engine bays and interiors of everything I could spot, sometimes peeking underneath to see just what was going on.

And I wasn’t the only one. The next generation of Speedhunters were on duty, inquiring as to what this bit is or what that thing does.

I really had no answer to this pair’s question as to “what are those two pillows for?” Call me an amateur, but I couldn’t even find one pillow under the car.

At the end of the day, my camera was still getting a workout.

Before the sun went down, though, everyone in attendance rolled on to the main straight for a group picture.

Walking through the cars as they drove into place was one of many highlights from the day.

Of course, a bit of elevation would have made all the difference here, something I’ll have to remember for next year.

After the gathering on the main straight, R’s Day still wasn’t over. The small crowed seemed to reach its apex at this point, with people clamoring around to try and get a decent shot.

Back in the paddock, there were more photos to take and somehow still more people to meet.

Rows and rows of R-cars proudly presenting themselves as the sun set.

Naturally, as it was an open track day during the other sessions, there were plenty of your usual suspects around as well.

Pretty much every track day here might as well be considered 86 Day or Miata Day, and there was a normal dose of both cars present.

Other Nissans (and Datsuns) could be spotted here too, which comes as no surprise.

And of course, no less than 40 excellent examples of everything a Skyline could and should be. It really was all too much to pack into one story, and I’ll be giving everyone a closer look at some of my favorites from the day here soon.

This was a day where I saw my love for these cars shaken alive again. The want is real — I need more Skylines in my life.

Again, a warm thanks to NCRC and Skyline Syndicate for putting this together and helping me around the circuit for to see these proper Japanese sports cars being put through their paces.

I can’t wait to see what’s in store for next year.

Nice coverage!
Good to see Canadian cars out there! Recognized the blue r34 from Vancouver

Yea, it's Charles Wong. Hoping to meet him when I visit my cousins in Vancouver. From Toronto!!

Thank you! Yeah, lots of these guys really made a trek to get out here to California, and I'm sure glad they did.

Have driven Laguna Seca a few times and might have a ride next year at the Rennsport Reunion. It's a fun track, but would be more interesting in the old configuration where you had a straight run to what is now T6.

The run up to Turn 9 (Rainey) and Rainey itself are really fun sections as well as T10, but the rest of the track is kind of uneventful. Fun track for sure, but a little over rated in my opinion.

No way in hell is that old configuration better than the current one.

I think the current layout is just amazing, but that's compared to other more recently-built courses. I also haven't been on any out of state, either.

Old one looks good if you like to go FLAT OUT!

Old one is better if you have big balls.

Picture of the old configuration if anyone was curious 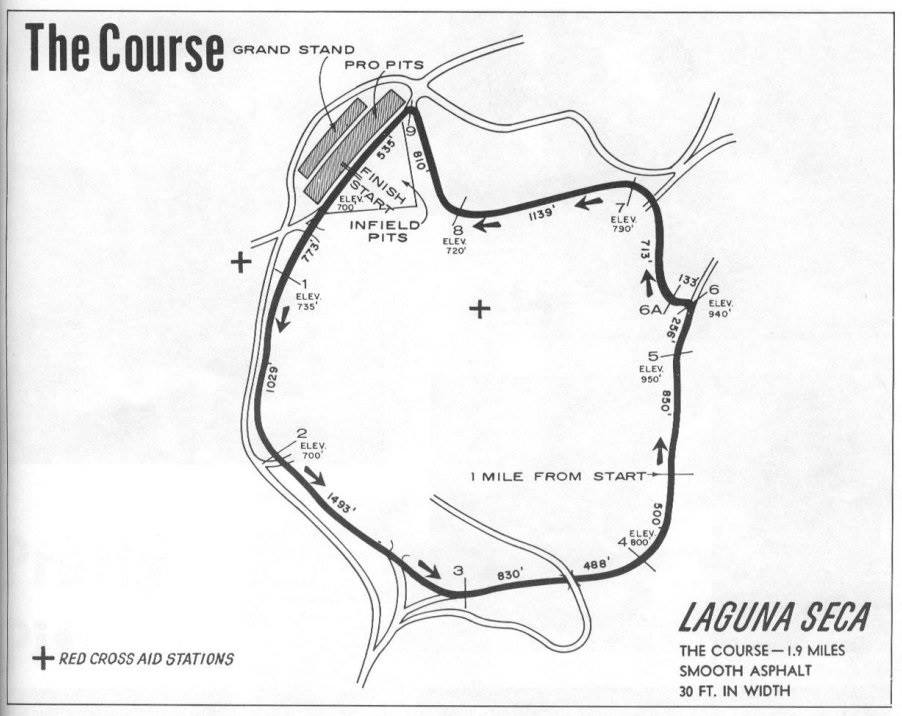 The R33 is often derided as the "boat" of GT-Rs, but not to these eyes.
I find it the most sensuous and organic of all Skylines. I could only find a silver and a green example in your pics due to it's rarity in America!

It seems people either gloss over the R33 or really love it. I promise you good up-close look of at least one from this event soon!

You're not alone on that. Sure, the R32 and R34 are awesome cars, but it's the R33 that really holds a special place in my heart. My friend's dad imported an R33 (the exact car is pictured below) into Canada 7 years ago, and I've gone for a ride in it a few times. Quite a beast! 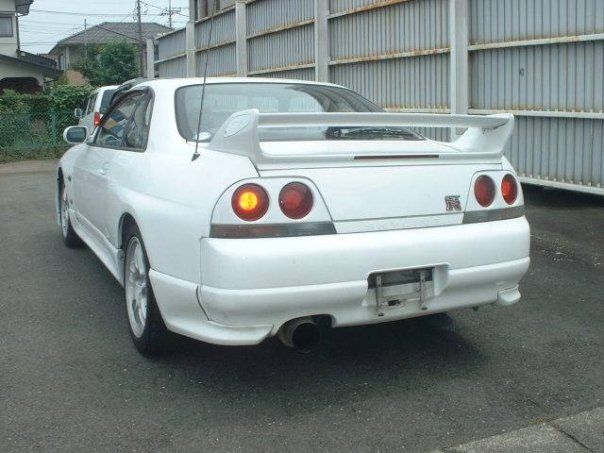 Came here to say, more R33 pics! There is a grey one, green one and a silver one in the background of a number of pics (and the spoiler shot) but no decent pics!

i just registered just to write what you already did. an event coverage about gtr's and not one single up-close picture of a r33. unfortunately it's the same with nismo festival and r's meeting coverage. the r33 is always underrepresented.

Honestly, I’m kinda glad the r33 isn’t represented that much as the other skylines; least the price hasn’t gone up that much.

Awesome Coverage. Thank you so much for these photos

Everytime I see a Skyline with California plates on it, my heart skips a beat. Too cool.

Honestly, I think green and purple are very underrated colors for cars, it was great to see that green R33, definitely a break from the norm. Frankly, I'm a bit tired of the blues and reds.

I, personally, dream of having an R34 GTR in Dodge's Plum Crazy with a satin finish, just because.

I don't like this story. Because of you I've spent the last half hour wading through ads on carsales.com again :/
Oh well, back to rehab again soon.

I know, I did the same thing. They are...beyond my means. Life is quite hard sometimes mate.

Will never forget my first ride in a modern GTR. The year was 2000 and the R33 GTR has just run 10.4 at 140mph 1/4... And it hooked up on the street. Back then it was an animal... Can still remember the comments of the “random” Lambo Diablo driver who go smoked and put down his window, “Mate, that’s a fast car”. At that point it was clear - I gotta get myself one of these. Nice article and great to hear support for the Muscle of the GTR group, the ‘33.