I was having trouble deciding between these two Mazdas at SEMA, as each is slightly insane in its own way.

One follows a more traditional formula while the other seems to throw the rulebook out almost entirely. Instead of depriving you of either car, I thought I’d show you both of them.

While both RX-7s have retained the appropriate rotary power plants, which we’ll get into in a moment, I think I already know how this will go down in the comments. It seems the Mazda purists are more outspoken when things don’t go exactly as they’d expect.

The white FD3S has chosen a Total Car Produce (TCP) Magic G-Face aero kit, which is undeniably a great choice. I have only ever seen this kit in person a handful of times, and it always amazes. Seeing as how it’s only very recently that the kit has been offered in the States, hopefully I’ll be able to see more as time goes on. It’s highly likely, too, given that TCP-Magic USA has just been launched. Staying truer to the classic body lines, I imagine this is the car that will get more overall approval.

On the other side of the exhibit hall, our other Mazda in question is wearing the radical Fujita Engineering (FEED) Afflux Version V (for victory, I’m told) full body kit. This is a much more dramatic transformation, especially with those HPF projector headlights up front.

I imagine this is the one that will likely upset those RX-7 purists who lurk in the dark corners of the internet, waiting to find a Mazda they can criticize for doing something different.

Both cars also have their own interpretation of what a side mirror should look like, and how to apply downforce in the rear. From the interior to the exterior, underneath the bodies and inside the hoods, it seems not a single part matches from these two cars.

Under the bonnet, the first car in question has replaced the factory cast parts with carbon fiber pieces to stuff air from the big single turbo conversion into the 13B twin-rotor power plant. It’s very well executed and seems to follow the unspoken rules that apparently apply to all RX-7s.

Meanwhile, the red FD3S has gone with an insane 26B four-rotor setup. The plumbing in the engine bay is seriously crazy and topped off with a plethora of Fujita Engineering bits. A nice set of ITBs supply the thirsty rotors with air, keeping things naturally aspirated in contrast to the white FD.

Both are extremely thorough builds that have made the covers of magazines and have no doubt required countless hours in the garage to create.

I was equally impressed by both cars, but which is the one for you — white or red?

All Hail The Demon King RX-7 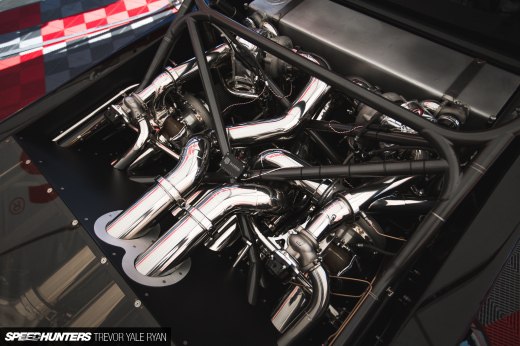 Party Out Back: A Boosted ’54 Chevy

The red one almost looks like the front of a track day car. like the mix between a radical and an ultima. Kinda unique, I dig it. But at the end of the day I'd take the white one bc it looks more normal and turbo.

Yeah TVR, i knew it reminded me of some sort of British sports car.

Track or Exotic(?) style, it's really hard to pick from these two...
These two have way more CHARACTER and LOOKS WAY BETTER than those over-fender kitted examples everywhere.
I'll go for the red one. (That front end just oozes STYLE.)

i'm gonna need an ass shot on the white one before i commit...

Haha Dino picked one up earlier in the year from a car at the track with this kit if that helps you: http://www.speedhunters.com/2017/02/tcp-magic-55motors-fd3s-mazda-rx7/

Ok, so which one threw the rulebook out the window? Both of these look pretty run-of-the-mill for a modified FD.

And no RX7 purist would complain about a FEED kit on an FD.

He probably means run of the mill by them both having a Japanese shop widebody and modified rotary engines. As a FD owner myself; id consider this within the boundaries of the normal stuff

How is a 4 rotor with a super rare body kit normal? That's about as rare as it gets as far as RX-7's go. There's way more 20B / LS / 2JZ swaps around with basic FEED / RE-A overfenders.

The afflux body kit has been around for like 10 years now. If you're constantly on rx7club, or a fb group theres lots of discussion, pics, and projects about 4 rotors. If youre not in the know, then its more special. Simple as that

I guess it just depends on one's definition of "run of the mill."

The front of the red one kinda looks a lot like a TVR Sagaris.

Such refined savage beauties, these cars are absolutely stunning to spectate. Purist or not, (regardless of the superficial part of the term)
i believe that everyone can fathom the substantial purity these two fine builds deliver (even from a distance) in an instictual, allmost spiritual connection. Formed by unmatched obsession and psychotic precision, these two impecable examples of Japanese mastery and dedication can put allmost any cars to shame, by Just being parked beside it. It is very gratifying to see the dedication that is and always will be put in to the Rx7, a dedication required as much as is deserved

I believe that both are unique in their own right. Can't go wrong either, turbo 2 rotor and NA 4 rotor? Both would sound amazing, I'm sure. So, why not both?

Both of the cars are pretty. White FD looks a bit aggressive and feels like a Varis kit in some ways. Red one is a bit more different but it's still a FD you can see that pretty clearly and the kit feels ilke a RE Amemiya kit. So, why not both ?

Thought the red one was a TVR Sagaris at first.

I thought the same thing when I spotted it across the show floor. Was equally excited once I walked up tho of not more! It even looked like it might have a sequential gearbox.

All in for the white one. The kit looks stunning.

I like them both, because a modified car is self expression at its finest, a nerdy hobby for people who found casemodding and scale models not expensive enough.

Both of them offer unique perspectives on what the owners find right and or like, each has its own flair so its hard to choose between them.

I find anything thats tastefully modified even if someone finds it outlandish isnt too bad of a thing, its all about if they like it or not.

I'm not a "Mazda purist" but I believe the FD RX-7 only needs a drop and wheels to be flawless. That body is one of the most beautiful cars ever made and adding a "Magic G-Face" (lol, what a name) kit to it is like putting wings and horns on McKenna Berkley.

There's a few cars out there I don't think you can do wild body mods to without making them worse, not better (Jag E-Type, midyear Sting Ray, 2nd gen Viper GTS, etc) and the FD is one of them.

I'd go with the red for that epic 4 rotor

That's just a carbon cover on the intake manifold.

The red one is so out of this community that I love it! And I'm sure the 26B sounds amazing at 9000 RPM.

TCP Magic for me. The FEED kit is nice, but it's a little overdone for me.

While I like the FEED kit something about the front end just seems off. I'd probably go with the explanation that interrupts the lines of what is arguably the most gracefully aging of 90's bubble cars whereas the TCP kit compliments them.

As a design student, I would agree with your analysis.

The Mazda RX-7 FD chassis design is 26 years old. I'm amazed that it still inspires enthusiasm from designers, tuners and us. Rotary fanboys are wondering if Mazda will bring out another rotary. In the meantime the RX Vision is absolutely stunning. As are the other two concepts at the Tokyo Motor show. For me Mazda design has always been one of the best in automobiles.

TRMNL7's white RX-7 is just my style for any car. Keep things true to original, but beef it up in every way. OEM+++ ya know?
The red RX-7 is the kind of car you build in a video game where you can go all out with no consequence, which is awesome! And in my opinion, as far as 4 rotors go, they will always be better naturally aspirated. Just imagine the sound as you approach 9,000+ rpms!

100% choose white for the colour, and with carbon/black & red accent, but either kit works for me because I like both of them.

I choose both. HA! No discrimination here! But seriously, I can't decide. The white FD is super aggressive and the track styling is awesome. The red FD looks super exotic and smooth which is also super appealing. I honestly can't choose just one.

White one looks super dope. Has an aggressive look to it. I like that. Awesome article!!