The heart of the annual Japanese Classic Car Show (JCCS) in Long Beach, California are the factory restored and original condition machines.

Doing a restoration job is a trial of research, OEM parts-hunting, and building to near perfection. It doesn’t matter if you’re going European, Japanese, or American, a resto will always be a challenge of the highest order. Of course, if you’re able to keep your classic car maintained and garage kept, then a restoration might not always be required, but you still have to resist that urge to make a major change.

However, there was a change to the JCCS this year, as not only did you get the nostalgic cars built prior to the 1990s, but also the ‘Neo Classics’. While many bemoan the idea of bringing cars newer than 1989 into the show, you have to realize that any car built and sold before 1997 is now over 20 years old. Yeah, I’m in denial, too. I’m not that damn old, I tell you! Regardless, opening the show and allowing the Neos the same space as the nostalgics, showed just how far Japanese car design has come. Well, save for two examples from Nissan: the Pao and the Figaro.

Both cars along with the Be-1 were built on a similar chassis as the K10 Nissan Micra, known as the B-platform. All four of the Nissan cars were also known as the Pike cars from their Pike Factory origins and were designed from the beginning to be retro-styled by Nissan’s special projects team.

This particular Pao is nearly bone stock, but according to Sean Morris of Top Rank/Importavehicle.com, the Terracotta color is very rare. I have no numbers to back up that claim, however there were only 51,657 sold in Japan on a first-come, first-served basis, and only at Nissan Cherry dealerships. So, the car was already limited in the first place.

I have a weakness to oddball hatchbacks, so this Pao made my day. It’s also got a rear hatch design that I like better and really wish that more manufacturers would go with – a ‘clamshell’ where the glass opens and you have a tailgate instead of a full hatchback. To me, it seems far more useful. This car also features a canvas roof, which was an option along with the full metal one. If you ever need tires for a Pao, though, good luck in finding the exact factory specification. This little car runs on 12-inch wheels with 82-series 155SR12 European-sized Bridgestone tires, the P-Metric equivalent of which is a P155/80R12.

The Nissan Figaro is nearly the same, but with a fixed-profile convertible body-style over the hatch, and was only made in 1991. It’s even rarer with just 20,073 sold, and all came with an MA10ET turbocharged 987cc inline-four, 3-speed automatic, and sliding roof. The only option was the color where you could get the Figaro in one that would match each of the four seasons. The most popular by sales was Lapis Grey (winter), followed by Emerald Green (spring), Pale Aqua (summer) and Topaz Mist (autumn) being the least sold. However, two additional cars were painted in different colors from that list.

In order to get the chance to own one, you had to be lucky and enter a lottery at a Nissan Cherry store. So these Pike cars hold a very interesting place in Nissan history, even if very brief.

Right next to those two retro-styled Nissans was a legendary Subaru Alcyone SVX, a legit example from Japan with right-hand drive no less. If you’re not familiar with the SVX, it was designed by Giorgetto Giugiaro, the same man responsible for one of the most famous cars of the era thanks to Back to the Future – the DeLorean DMC-12.

The Alcyone SVX was Subaru’s attempt at entering the luxury-performance segment, and was also was one of the few cars that brought much of its concept design right into production. However, what makes it famous is the aircraft-inspired glass-to-glass canopy. There is a metal framework on the A, B, and C-pillars, but the majority of the greenhouse is glass and the side windows split like many exotics of the time. The pillar-to-pillar glass roof feature is something that hasn’t been really tried again since SVX production in December of 1996, but I doubt it could even be done today with the requirements of A-pillar airbags and roll-over protection requirements.

I’ve seen these before at the Mitsubishi Owners Day, but previously I’d never stopped for a proper look at the third-generation Mitsubishi Delica Star Wagon. It’s not quite a Pajero or Montero, but is a very intriguing four-wheel drive recreational vehicle. It certainly has a spaceship feel that most of these Japanese designed ‘UFO’ vans have with the driver sitting ahead of the front wheels, engine splitting the front passengers, and that not-quite-an-arch side profile.

A cool feature for the passengers is the skyline roof and the rear-facing seats that you normally find on something like a conversion van built from a Chevrolet Express van or Dodge Ram van. The L300, the base for the Star Wagon, was built from 1986 to 1994, but the Express – the stripped-out commercial version – was built and sold all the way up to 2013 in Australia and was the only vehicle sold with a 1-star ANCAP safety rating. It’s also still built and sold under the China Motor Corporation (CMC) under the Delica name including those shipped to Mexico but with Dodge-badging instead of CMC.

A Real Charade, Not A Parody

Here’s a little hatchback that anyone born in the US after 1992 probably won’t even recognize. Actually, anyone in the US will probably not really recognize this car since Daihatsu was only in the US for seven years. However, this was the car the Japanese carmaker brought over to launch the brand stateside: the Charade. It’s classified as a super-mini, but really isn’t much smaller than a Honda Civic of the same timeframe. That’s probably why it really didn’t take off here.

While Japan got a three-cylinder turbocharged GTti variant, US-spec Charade’s came with either a 993cc three-cylinder CB90 or the optional 1.3-liter HC-E four-cylinder – both naturally aspirated. This CLS has the CB90, which ran quite rough and was generally considered more expensive than a mid-model Civic. At around $7000, the Charade CLS was only $1500 cheaper than a 1989 Honda Civic DX hatch, but that DX also came with a D15B2 1.5-liter four-cylinder with 92hp over the Charade three-cylinder’s 53hp. It also didn’t help that there weren’t so many Daihatsu dealers in those seven years.

Trunk Bike For A City

It wouldn’t be a JCCS or even a Japanese car article if it didn’t have some sort of Honda in it, and I don’t think we could find a better pair. Well, pairing I should say with this City AA R and matching Motocompo. The City is not the most well-loved of classic Hondas and was referred to as the ‘Tall Boy’ when sold at Honda Clio dealerships. However, Japanese motoring journalists of the time were impressed by the City, to the point of it nearly taking the 1981 Car of the Year Award away from the Toyota Soarer.

The Tall Boy design allowed for a more upright seating position, providing a cabin space similar to larger cars like the Civic despite being a true subcompact. The engine was the ER version of the CVCC-II, a 1.2-liter four-cylinder that made 44hp. The CVCC-II was an updated version of the original CVCC, a carbureted design made for improved emissions, but the ER featured a longer stroke, 10.0:1 compression, and a two-barrel Keihin carburetor.

The NCZ50 Motocompo is a small, 50cc bike that’s designed to be folded away and stored in the City, including the Turbo, and in the Honda Today. This wasn’t an afterthought for the City, however, as the whole rear trunk was designed around housing the Motocompo inside it. While popular today and seen as a cult figure in the scooter/small bike market, the NCZ50 didn’t sell well. Original sales estimates figured that 10,000 Motocompos would be sold per month, but in the end only 3,000 per month were sold for a total production 53,369 by 1983, its final year of production. The ‘Trunk Bike’ is now coveted around the world and you’ll see some pop up every so often here in the US.

That’s a taste of the stock and restored side of JCCS 2017; stay tuned for modified and vintage race car highlights coming up very soon.

Thanks for the coverage! Any more pics of the Blue E7 Corolla in the background of the first few pics? Thanks again, I'll stay tuned.

Now I want a Motocompo

Ahhh, the Charade. The car you could drive off a dealer lot brand new for under 6k in the U.S.

WHO ELSE WANTS A NISSAN PAO?!?! I would absolutely love one of those!! I love wagons and the retro style just does it for me haha!! I also like the split hatch, needs less room, easier to open and easier to load, total win win over the classic big hatch door.
$6k in '790 is about $20k in today's money so I can see why the Charade struggled to sell...
That SVX looks pristine, too bad the transmissions in those Subarus totaled most of these out.

The interior of the Nissan Figaro would put a smile on my face every morning, commuting to work.

Anyone know why that Charade has Aussie plates on the front?
Surely no one would bother importing one into the states?

I'm the owner of the Charade and can answer that; I'm from Australia myself and it's some homage to my origin. There were so many Charades back there, which is part of the reason I purchased this one stateside, and it's a reminder of home

That white CRX in the first image, that is sweet...

There used to be a Nissan Figaro in Emerald Green that occasionally appears at where I stay.

This Nissan Figaro used to appear quite often around the area where I stay. Hadn't seen it in a while now though... 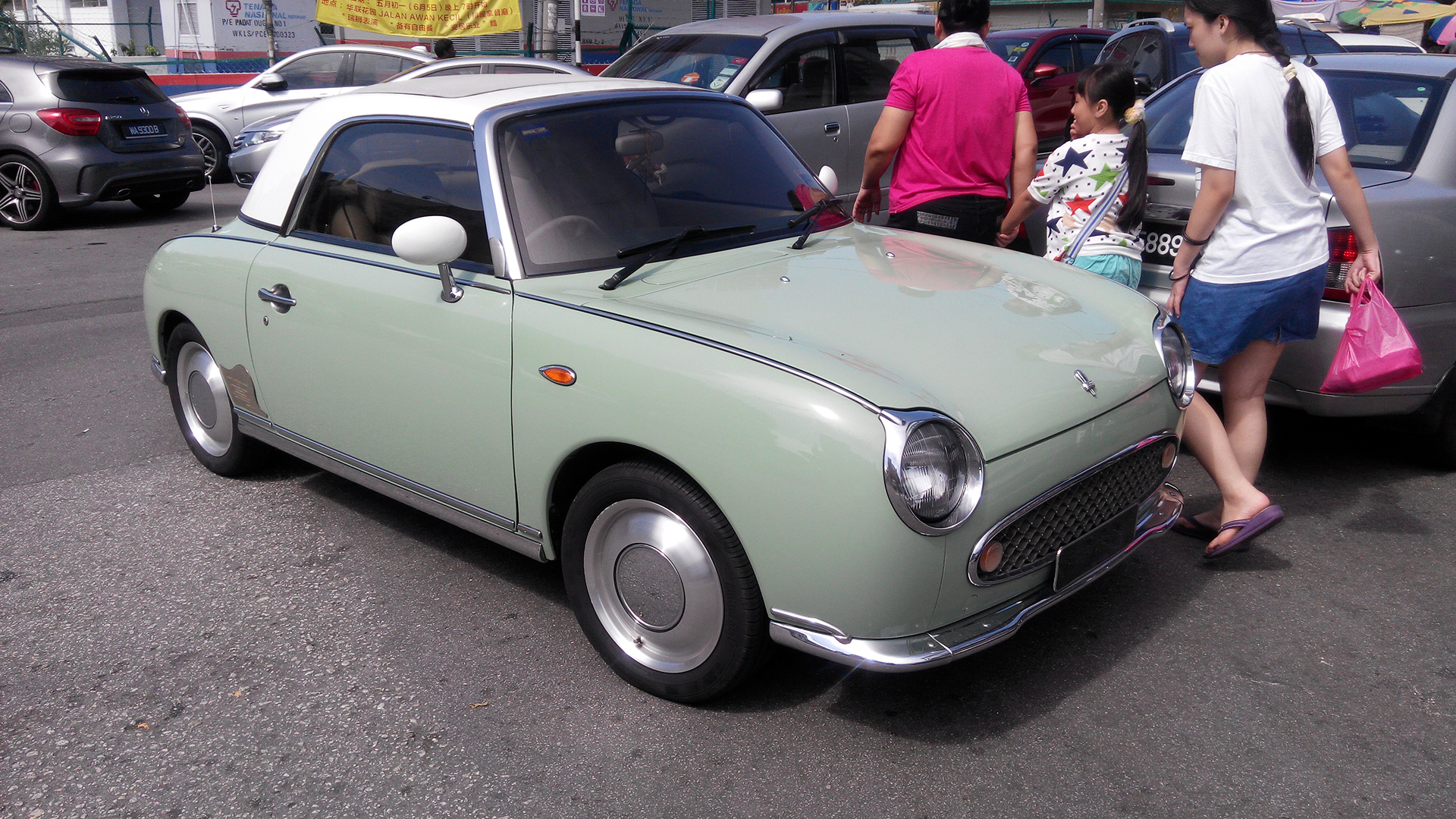 My art teacher in high school had a green Figaro, and then a Pink one!

love that Mr Figgy, that interior is so cool

Thanks for the love for my City and his little MiniMe. Incidentally, the Nissan Pao at the Lane Motor Museum is one of my early acquisitions, too. Love them both!

Crazy how rare those cars are. They're all common as muck here in Bristol (UK). We are hugely spoilt for amazing cars due to the port though.

That Pulsar NX thooo! (beside the SVX)

I just want Delicas every day for all days.

Came to say very similar... I see loads in the UK. Would never have said production was that limited!

- Hey Speedhunters this Sunday 8th is the Yearly Honda CIty meet in Japan at the Motegi Circuit incase anyone's keen to go there to see it. Maybe one year I will get to Japan myself for it...Meanwhile here's a current pic. of my own City Turbo 'Widebody' replica. 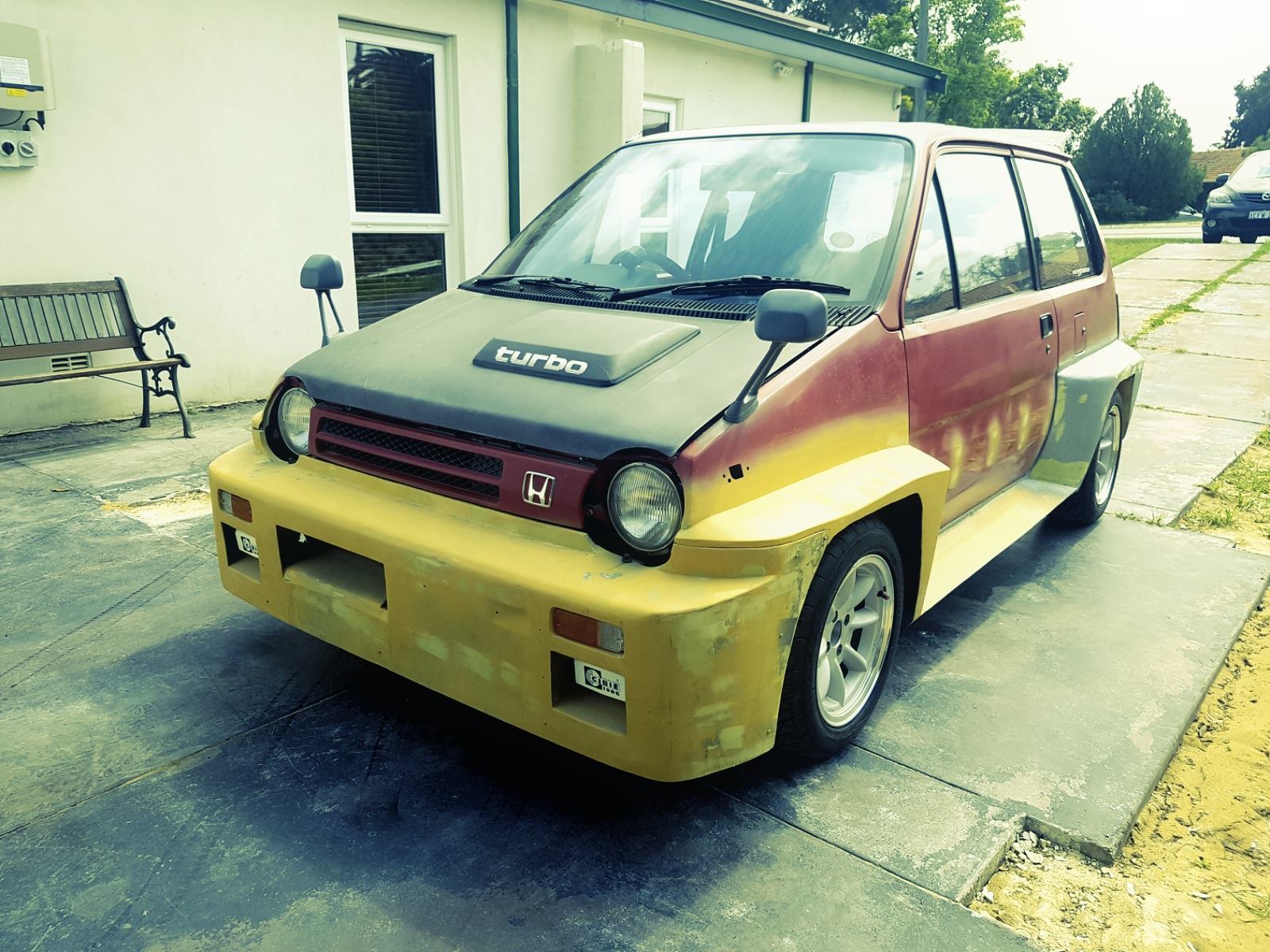 There's quite a few Emerald Green Nissan Figaro's driving around, here in Ireland.

Would love a closer look at the Nissan Exa. Such a strange and intriguing looking car. Very 80s with that rear canopy. Love it.

The event needs a Toyota Sera.....

Now the Charade GTTI was a car really fast. 1.000cc, three cylinders and turbo.... it was quite faste