Cast your minds back 15 years to a time when the BNR34 Skyline GT-R was ending its four years of dominance in Japanese motorsports. From Super Taikyu to JGTC, the GT-R flew the flag high and proud for Nissan, continuing what the legendary R32 and R33 had achieved up until 1999.

2002 was also a turning point for Nissan itself; R34 production ended in August, and the beginning of the racing season saw the iconic RB26DETT replaced by the VQ30DETT for its GT500 cars.

So what are two Nissan race cars doing in a Honda museum? This year, Twin Ring Motegi is celebrating its 20th anniversary, which means the Honda Collection Hall housed inside the facility has a reason to celebrate too. As part of those anniversary celebrations, the museum is taking a look back at some important times in Japanese motorsport with some special displays. This is one of them.

While it was strange seeing the GT-Rs in a Honda museum, it actually made total sense. I thought it was very cool of Honda to curate this exhibition.

To the contrary, I quite vividly recall hating on the VQ30DETT-powered Calsonic GT500 racer back in its era. It was the beginning of the end – no more RB26DETT. I can remember thinking how the hell Nissan could do this to GT-R enthusiasts!

2002 was a dismal season for the GT500 GT-Rs; teams struggled to get the most out of the new V6 engine and consequently the wins never came. It was only a matter of time though, and in 2003 the VQ30 shone as a competitive engine.

Despite its initial problems, there was no way any Skyline fan out there didn’t look at those pumped lines with lust. It was, after all, the most extreme version of a GT-R ever created, and in 2003 the shape got even more organic with a less angular feel to it.

The first JGTC race I ever covered was in 2003 at Motegi, so seeing this VQ30-powered Skyline in person brought back some special memories.

It’s also pretty wild to see how aero has evolved in the GT500 class. Back then, the cars still had a tangible similarity to the production machines we all loved, but nowadays the latest GT500 R35 looks pretty much nothing like its road-going counterpart.

Displayed next to the Calsonic machine was the Endless BNR34 N1-based racer from Super Taikyu. GT-Rs were used in the series years after the model went out of production, and this particular BNR34 is one of the most recognizable cars from that awesome period in JDM racing.

I remember loving how the C-West bumper changed the look of the car.

Plus, it ran on Enkei NT03RRs which were the wheels that Nissan itself used during the development of the R34 at the Nürburgring Nordschleife. Of course, as a Team Endless car there are 6-pot calipers and 2-piece rotors helping with the braking performance.

The cabins were pretty stripped down; no frills, just a bunch of gauges and basic switches controlling the electrics and auxiliary fans for the extra diff and gearbox coolers that these cars ran.

What makes these N1-based sorts of series so cool and fun to follow to this day is that aero is not a big component of the sport, so it’s all to do with suspension setup, mechanicals and driving skill.

Looking at the back of the Endless racer reminded me of the street-spec demo car that MCR built around the same time. In fact, I wonder if they still have it?

It was beyond cool seeing these two GT-R legends once again. It certainly made me think about how much things have changed in the last 15 years, but at the same time how little has also changed. I mean, the BNR34 still remains a sought after car and the GT-R is still battling it out in GT500. So despite all the changes, GT-R fans are still in a good place right now. 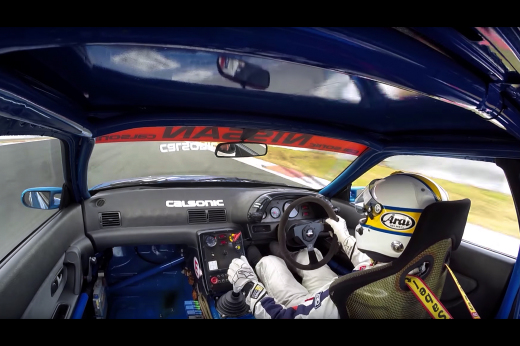 Onboard The Calsonic R32 Skyline GT-R

I can remember using that GTR in my Gran Tourismo 2 days as well as the first few versions of Forza. I still have a soft spot for the Calsonic GT500 liverys

Impul still rocks it with the livery LOL

Very cool cars. I fondly remember racing those around a virtual track on the PS1.

Pretty sweet to see a couple of RN01s in the background, too!

Do you have actual reference of the Z34 in the GT500, because i don't think it existed. I can visually remember the Z33, in fact i think it raced at the same time as the R35 did.

Ah the red and silver one! I remember that well.

But I still couldn't understand the reason why would Honda display another make's race legends.
Appreciate if you can clarify this part.

his year, Twin Ring Motegi is celebrating its 20th anniversary, which means the Honda Collection Hall housed inside the facility has a reason to celebrate too. As part of those anniversary celebrations, the museum is taking a look back at some important times in Japanese motorsport with some special displays.

Thanks for the sentiment, browncoat.

Exactly that, sure it's some important times during the Japanese motorsport. But exactly what is special and why is it relevant for Honda to display it? Was there a connection somewhere?

A simple 'Sharing the Spirit of Motorsport' answer would suffice really, but I'd like to know more.

It's just that, Honda recognizing the importance of other legendary brands in racing. I think it's a cool move and gives an additional reason to visit the museum

Another great feature, thank you! Brings back a lot of fond memories of my younger self watching these cars tearing up the track in awe (usually with my mouth slightly open) . I wish to own a copy of the street R34 one day.

Glad you like it! Always nice to go down memory lane even if it was only 15 yeas back

Why can't Nissan do an evolution of its straight six and update it with more modern technique just like BMW does it..???

Don't get me started on Nissan. They have now made a new 400 hp 3L twin turbo engine and stuck it in the Infiniti Q60 which would be the new Skyline Coupe. I say would be because they've decided not to sell it in Japan! WTF right? They have such a muddled up and confusing line up of cars, branding and marketing. It's as if it's all handled by different teams of people and nobody talks to each other. Which is precisely what is happening. Has all diluted the brand identity big time.

I totally agree with you. In Italian I would call this: CHE VERGOGNA!

Im so jealous that you SH people have areas where you can see and cover these types of cars. Since Im in Florida, Its mostly a nascar thing (which im not a fan of) and to see these stories and view the snaps just keeps me coming back to SH

That's good to hear! Actually Motegi has (or had, not sure if they still do it) a Nascar racing school believe it or not. It's the only track in Japan with a certified oval of course, they used to run the IRL Indy Japan 300 race there back in the day. Covered it twice, never seen cars go that fast inches for my face. I remember being unable to keep my eyes open for long as the ethanol fumes were so strong as the cars shot by

Do you need tickets for it

You just pay the entrance fee at the main gate when you come in and they you can visit the entire compound, including the track and the main paddock (when there are no events/races on), the collection hall and the various attractions they have there

The Super Taikyu GT-R paint scheme was available on a racing modification for the Nissan Skyline GT-R on Gran Turismo 2.

Nice cars.... But do u have any shots of the downhill mountain bikes in the background? They had internal gearboxes, very high tech for the day, and most likely a technical dead end, however showed how Honda engineering was willing to go after anything.

Those Honda RN01, never knew they are still in existence, there was a myth that they got crushed