It’s no secret that I am not big on car shows. If it’s not moving at a high rate of speed or producing massive amounts of tire smoke, I usually don’t want anything to do with it. But every now and then I make exceptions, and seeing as I am a big Porsche guy, I could not resist the draw of what has become a car culture phenomenon.

For Luftgekühlt events 2 and 3, I just stopped by with my family, casually taking photos as cars were pulling out of the show. I came at the last hour because I was lazy.

Little did I know then, though, that just strolling around taking snaps would ultimately see me involved in the event itself. First, my shots ended up in the Luft coffee book; then the brains behind the operation, Patrick Long and Howie Idelson, asked me to help document some behind the scenes activities during the load-in the day before this year’s event.

Of course, I could not have said yes any faster; I really love what Luftgekühlt is doing for Southern California’s car community.

To say Luft 4 was a success would be a massive understatement. Although, that was not the feeling we had the night before.

While load-in was dry as a bone with amazing SoCal weather, the night before and the morning of the event had serious downpour conditions.

I had perfect weather and perfect natural light to shoot all the main cars loading in; while rain would normally spell disaster for any other car event involving millions of dollars’ worth of cars it was not the case for Luft 4.

Howie told me that he slept in a motor coach nearby the event location, and that it was beaten on by the rain. The team were very worried that no one would show up.

A year of planning felt like it was about to go down the drain.

Of course, that did not happen. In fact, it turned out to be the most successful Luftgekühlt event yet, with people from all over the world attending. That’s a pretty amazing for a little air-cooled car show.

Part of the reason of Luft’s continued success is the quality of car that shows up.

For those of you who don’t know, Luftgekühlt actually translates to ‘air-cooled,’ and that sets the tone for the Porsche models on show.

The selection of cars is highly curated by the organisers, and once again it did not disappoint this year. The centerpiece of the display was the 1951 356 SL Gmund Coupe.

Load-in day was much like any other car show that I’ve shot.

This aspect of an event is my favorite to shoot, because you can actually hear the cars run and smell the exhaust fumes. It really is a treat for me as most of these race cars were active before my time.

The venue itself was amazing too. Located near the Port of Los Angeles, this massive warehouse is home to swap meets, art-related shops and even a craft brewery.

It’s the perfect backdrop for the event, a relaxing environment outside of the normal parking lot-type show that we’re all used to.

While the majority of cars were driven into the venue, there was a constant stream of dream cars being unloaded from transporters, most of which were either not street legal or had been brought to the show from afar. Often it was a case of both.

Of course, the Singers get trailered. It’s a shame in some ways as they are such amazing driver’s cars.

One by one, Jeff Zwart and other the organisers would pull the cars up on the dock or place them in areas where I could photograph them before they were loaded into position.

It was a ballet of sorts, but it was fun for me as I got to see each car up close and personal. Check out how dirty this 911 that had just finished the Mexican 1000 was.

I also had a chance to check out this really awesome 356 built by Rod Emory. The car has 964 running gear and to top it all off is all-wheel drive.

It’s going to be a blast to drive on the dirt, and you can bet I will be featuring it sooner rather than later. I also had a chance to stop by Rod’s shop recently, so expect that story soon, too.

Art and air-cooled Porsches – what more could you want? It was honestly hard not to make amazing photos at Luftgekühlt.

I wasn’t the only one taking advantage of the opportunity; inside the venue another photographer had set up a massive light.

The load-in slowed down a little around midday, which allowed me to catch up with a few friends and refuel. How cool is it that they made custom cups for the nitro brew coffee on offer? This is my kind of car show!

The slower pace also gave me a chance to do a few spotlights, one of which centered on this immaculately built 959 by Bruce Canepa.

This thing was absolutely stunning inside and out, and easily ranked as one of my favorite cars at the show.

As far as a show-stopper, the Sunoco 917/30, which was also restored by Bruce Canepa, would be hard to beat.

There really is so much detail in this thing and I wish I could have heard it run.

With all the major showpieces loaded in and out of the impending rain, it was time for me to check out another aspect of Luftgekühlt.

Not too far away from the show venue, RM Sotheby’s headquarters had been transformed into an event space for the Luftgekühlt book launch and social gathering.

The who’s who of the Porsche world were in attendance. The guy on the left is Kohey Takada from Motorhead magazine, and to the right is Pete Stout of 000 magazine.

I didn’t stay very long as my call time the next day was super early. So I stuffed my face with sausages and headed home for some sleep.

For how hard it was raining, it was amazing to see how many people brought out their classic air-cooled machines.

But everyone on the Luft 4 crew helped load-in the hundreds of cars waiting to enter.

As I mentioned earlier, the entire event and project that is Luftgekühlt was a massive success.

Even the line to get inside the venue was huge.

I was so glad I did the majority of my shooting before the crowd arrived as it quickly became impossible to get a clear shot. My attention was turned to the people in attendance.

Everyone’s favorite Urban Outlaw showed up with autograph pen in hand. I said hello, and came back an hour later to find that he’d only moved a few meters from his starting position. Talk about getting mobbed.

I keep hearing that car manufacturers are worried about millennials not buying cars and not being into car culture. This may become true in the far future when less and less internal combustion cars become readily available, but if you were to look at a snapshot of what car culture is like as a whole today, you will find a different picture.

It’s safe to say that car culture is more popular than ever before. Thanks to the internet and passionate people like Pat Long and Howie Idelson, the general public can enjoy very rare, multi-million dollar dream cars in our own way.

Luftgekühlt is thriving because of readers like you guys and regular car fanatics like myself. When Luft 5 comes around, maybe it’ll be worth your while to check flights or go on an epic road trip to see what all the buzz is about. Trust me, you won’t be disappointed.

Omg, is this real life!!?? All this Porsche (and general German) love on SH again!! Very happy about this, back to frequenting the site!

Porsche styling has never done anything for me and it never will. :-/
..Different strokes for different folks...

Damn, all these photos...just make me wanna cry. They're so pretty.

I dream of a show where you can get euro cars from the same vintage era together. Imagine sixties/seventies Porsche's, BMW's, Alfa's getting together. Variety, but within a certain window in time. The time is right, the enthusiasts are there.

there is one in greenville SC that happens every year in october on a golf course. Its called the Euro Auto Festival and is definetly worth checking out as long as you aren't on the other side of the world. There is all that, Alfas, Ferraris, Porsches, BMWs.

Wow...what an amazing looking show! And how about the color on that 959? I've personally never seen a Porsche in that shade of green. I'm guessing by the fact that there isn't a single picture of one..the RWB cars, are probably not all that welcomed at this kind of event? I can picture in my head, just how worked up, all the Porsche purists/snobs would get over seeing one of Nakai's creations. But, I think this will change though.. Once upon a time, Magnus Walker was given the same kind of treatment, but now, he's a superstar of the Porsche world; so I think it's just a matter of time, until RWB is more or less accepted by the Porsche community/fan base.

I shutter to think just HOW many millions of dollars worth of cars there were.. It's nice to see that the owners aren't afraid to take their cars out, rain or shine.

I included one in my gallery.

See! There were 3 last year. 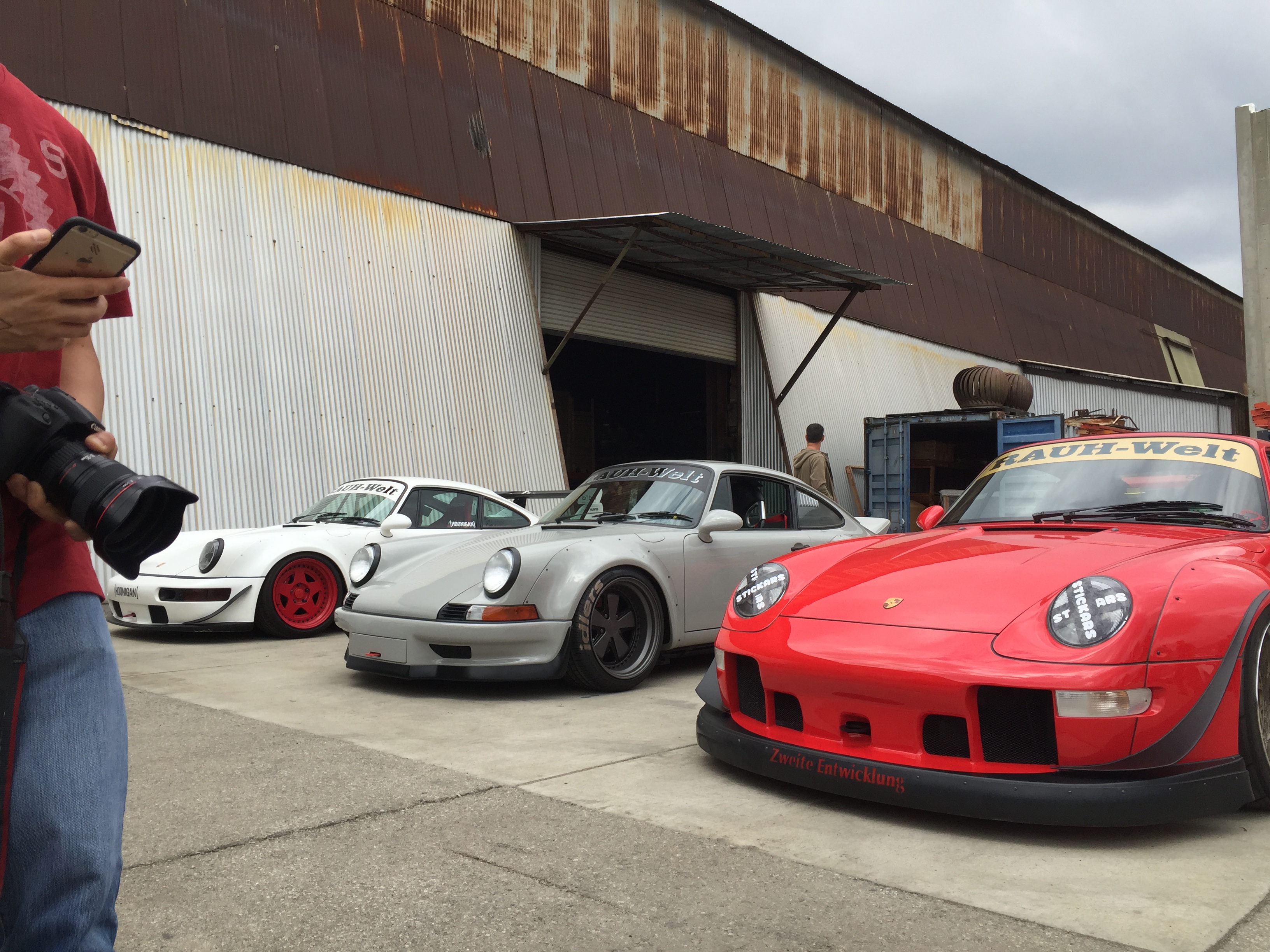 There was one in the show this year. Last year, I believe there were three.

Really wish I didn't work saturdays when all the good events are happening. That being said, I'm hitting up the Car and Driver Cars and coffee tomorrow in Pontiac, MI, and Motorstadt in Macomb, MI after. Should be fun!

This is the first post I've ever made on speed hunters. Absolutely stunning work.

Might wanna rephrase your sentence unless your Larry in disguise...

That mint 959 is mesmerizing.

You don't see a 959 very often, even it's a GREEN one.
30+ years later, it still looks way better than any other models they've produced recently...
(IMO, the ONLY modification to the exterior is a set of BBS RSs and that's IT.)
Thanks for this stunning post, it made my day!

That photo with the little girl sleeping in 356 is easily my favourite, and I can't even tell you why. It just has soul. Great job Larry, as always. Your photos are really something else.

This was a great read . I loved the shot compositions . Thank you.

Best thing out of Deutschland since Messerschmitt

Picture 22 and 51 are amazing. They show so much ambience. Just relaxing around a dozen of 911's with you feet in the air. I really enjoyed this article. Not just showing the show, but also the layers around it. I tip my hat for you Mr. Larry.

I think this is less of a car show and more on the side of an art installation. I love Porsche's but can't help but think the surge in popularity as a bit of a fad, seems vintage Alfa's are the next fad as well just my .02 not to take away from them of course.