Down The Varis Rabbit Hole

To car enthusiasts, automobiles are so much more than simple devices to transport us from point A to point B; they’re something truly special.

Our cars become a part of us and we become a part of them. We take care of them as if they are a living entity, while spending unimaginable amounts of money on them just like we would if they were our very own child. Our cars transcend the textbook definition of an ‘automobile’ and become something we dream about. Following our passion may seem irrational to most, but to us it makes total sense.

Before the sun was even thinking about peeking over the horizon to signal the start of the new day in Texas, I found myself spurred by passion. I made a fresh cup of coffee, gathered up my camera equipment, and readied myself for a shoot with Ernest and his third-gen Subaru WRX.

Enthusiasts find themselves drawn to certain makes and models for different reasons, and for Ernest the WRX ticked all the boxes. It had distinct lines and styling, a 5-speed manual gearbox, and the added functionality of a hatchback.

After finding a suitable example, the original plan was to do just a few select modifications and not go overboard spending too much money on it. But as you can see, that thinking went right out the window.

Ernest’s plans became a lot more substantial after he saw a WRX hatch on Instagram running a full Varis wide-body kit. That car made such an impression on him that all hopes of not falling down the modifying rabbit hole quickly diminished.

The wide-body kit added so much drama and character to the car without altering its original lines too much. In Ernest’s eyes it was just right, although he did wonder why Varis didn’t go more extreme.

It seems that nowadays simple and understated is out; it’s all about the big fenders and over-the-top bumpers, side steps and wings. Surely Varis could sell more kits if they followed the trend, right?

Full of curiosity, Ernest, who travels to Japan quite regularly, decided to make a special trip out to the Varis workshop and find out why they do what they do.

Watching the parts being made firsthand, and talking to Naohiro-san about the vision and purpose behind Varis’s designs had a big influence on Ernest and the way his build has turned out.

The goal evolved; not only did Ernest want to end up with car he could be proud of, but it needed to be built in a way that if shipped to Japan, it would be right at home.

Living in Japan has real advantages when you’re building a JDM-spec car, one of the big things is being able to pick up parts straight from the source. Where possible, Ernest would do just that, squeezing as many items into his luggage before heading back to the US. Of course, some parts just had to be shipped stateside, including the carbon fiber hood and the Voltex H2S GT wing.

Authentic Varis kits come with either a black or newer gold logo badge, but during one of Ernest’s many visit to the warehouse, he spotted a special blue plaque and knew he had to have it as a way to differentiate his car from others. It’s a nice little detail.

Wanting an ultra-low right height when parked but not at the expensive of drivability when the WRX is on the move, Ernest chose an Air Lift Performance suspension setup with 3H management. Further enhancing the setup are lower control arms, a strut bar, and front H brace all from the Cusco catalog.

For the time being, things remain civilized under the hood, Ernest just sticking with the basics in enhancing the factory-fitted EJ25. There’s a Cobb intake and air box, Invida down-pipe running into a Perrin cat-back exhaust system, and a Stage 2 OTS tune.

There are plans for more though, and in anticipation of upping the performance ante in the future, the driveline has seen a little more work. The WRX’s original 5-speed is gone, in its place a 6-speed transmission from a 2011 STI, and the factory clutch was swapped out for an ACT 6-puk heavy-duty unit. There’s also aftermarket rear diff mount inserts and upgraded pivot and linkage bushings in the mix.

All around Ernest’s car are little details that you’d easily miss unless you knew what you were looking for.

One of my favorites is the custom carbon holder for the Air Lift Performance 3H system controller. It does do away with the cupholders, but it’s a sacrifice Ernest is willing to make.

Also suspension-related, in keeping with all the carbon details throughout the interior, Ernest was able to get his hands on a carbon fiber air tank from RS Carbon. The tank integrates nicely with the custom, fully-welded 4-point roll-cage from Apex Auto Works that sits behind Bride EDIRB 023 seats flanked with Bulletproof Automotive harnesses.

The attention to detail extends even to the weave direction of the carbon fiber. For the driver’s side, the direction is right for JDM carbon fiber pieces, whereas the USDM faces left. This meant that a lot of the interior trim also had to be custom made to fit the car.

It’s the sum of all its parts that makes Ernest’s WRX special. It’s plain to see that it’s now well beyond the original desire to make a few changes here and there, and not go too wild. However, when you are following your passion nothing will get in your way.

It’s amazing how something as simple as a car build can change your life. The experiences gained, the friends made, and the feeling of purpose – these are just some of the reasons why to us, the enthusiasts, the car will always be something more than a simple mode of transport. So, what does your car mean you?

I like the mods. The cage is a little unnecessary, but whatever lol.

I'd do exactly the opposite with this char, keeping stock interior, and beastly engine mods. But nicely executed nevertheless.

That's the way i've gone with my '10 STI. 400bhp and stock outside. Am planning on going there sometime in the future, it's a long term project.

This car made me poop my pants, which says a lot, cuz I had just pooped my pants an hour earlier and thought things were going to go pretty smooth after that...

I've never seen a perfect WRX but this is pretty close.

That is the sickest Mazda Speed 3 wagon ive ever seen....

The 3rd-gen WRX was probably the best series as far as body lines. The soft lines of the front end with a chop at the end. The modern WRXs are so angular and puffy they kind of distract from the overall intent.

FALSE!!! Everyone knows the first gen imprezas are and always will be the greatest looking subarus of all time!

I agree! At first, I really wasn't a fan of the lines, but once I actually let it soak in, I began to like it rather quickly ^_^

that's exactly how I was, thouuuuugh I still don't really like the ones that don't have the factory wide-track, they're just... too sedate.

That's something I think a lot of the newer cars coming out of Japan have in common.. kinda sedated and bland

Longer than that. I have a 1998 2.5rs coupe and the block is stamped with ej25 although it is and ej25D which changes it a bit from your sti blocks. Many subarus other than stis get a form of ej25

Only in the North America.

Very good on the eyes

Of course it has air suspension... Everything else about the car is nice though.

I can't make it out of my driveway without it o.0

Is bolt in cages like that legal for anything track related?

I don't want to hear anyone complain about the minimal power upgrades!!!!! Smart people learn from others mistakes. CONGRATS on the restraint and keeping it stg2. Your engine thanks you.

Or you blew your wad on crazy expensive body kits, wings, carbon fiber, and a top of the line air ride system. Yea you're right, performance mods probably would have been the "dumb" choice.. Lol smh guy has a roll cage, harnesses, etc, and it's just a hard parker with stance nation air ride. I'm sorry but restraint wasn't used

All in due time. There is no rush to get rid of it, on my part.

Not that this isn't a very cool looking car, it is. Very solid show car for not being in Japan

I don't think performance mods would have been "dumb" per say, but as the article stated, he wants to the other things and build his drive line to handle the power down the line. Some people go power first, others the latter. So many different approaches to things right?

I really like this, I think it being white really aids the motorsport vibe too. Good on the owner for putting in as much effort as he has, projects are projects, they're never done and I look forward to what power mods will come in the future, Subaru engines are one of those that can be a bit chocolate if not done properly and with a lot of thought so I imagine if this fella puts as much effort into it as he has the rest of the car it'll be great. If you're part of the FB groups you'll know what I'm talking about (knock knock, ringland failure, open source downloaded tunes etc etc etc) other engines are a bit more forgiving or take more from the off without super disastrous side effects though have their own issues. No hate on Subaru engines though (I have one!)

This would have to be one of my fav current kits on the market. Bang on, Varis!

Awesome location for the shoot, i took pictures of my car here 2 years ago, its cool to see some speedhunting from my hometown! 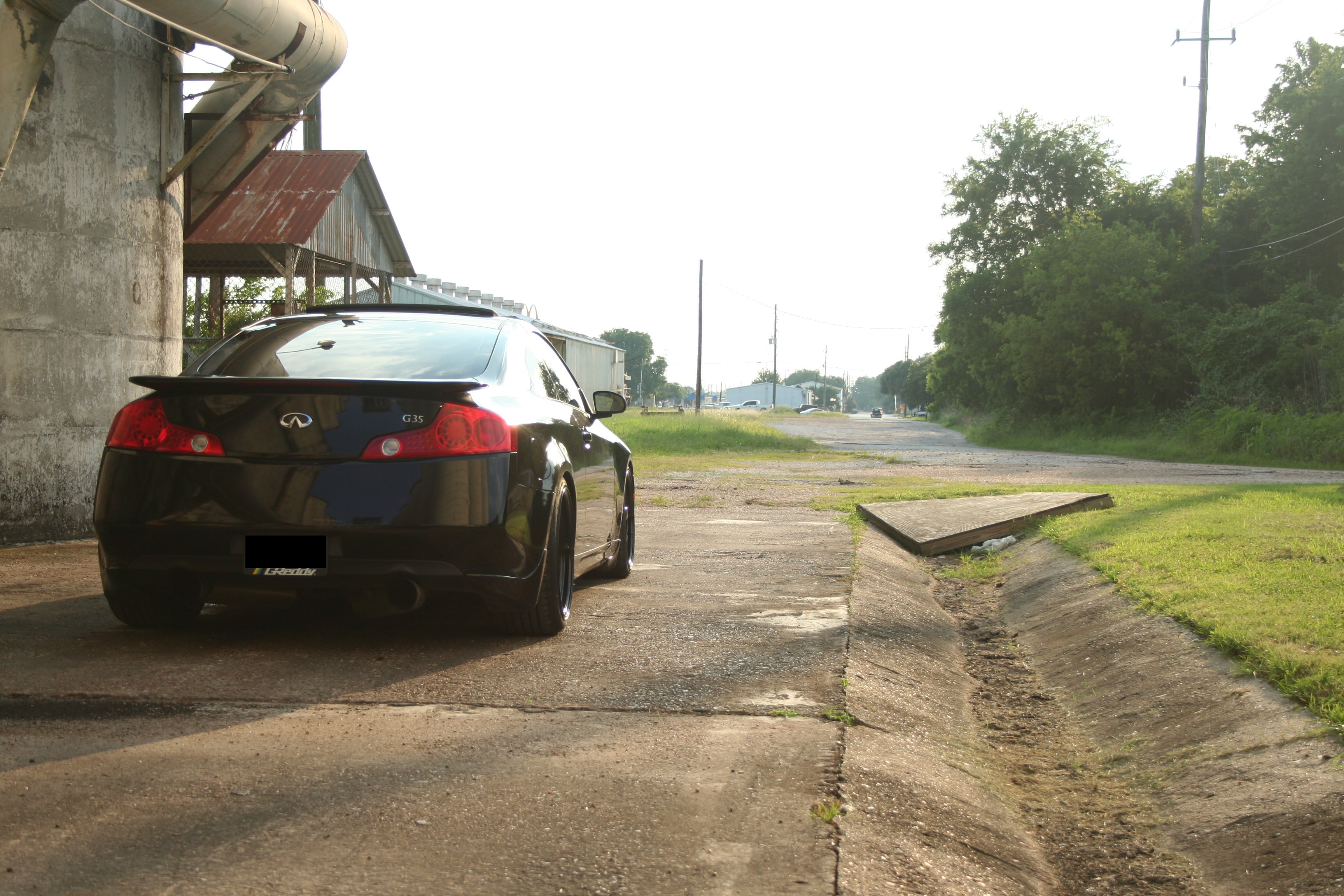 I loved that spot! My parents live in the area so when I'm in the States, you know where to find me

Could do with a bit more carbon.