The term ‘rat rod’ gets thrown around a lot these days. Some use the term to describe any hot rod that doesn’t have a glossy paint job, while others use it to make their crappy old cars seem cool and desirable, usually when they are trying to sell them.

And then there are the genuine, in-your-face rat rods, like this one I came across at the recent California Hot Rod Reunion.

Few cars at this year’s CHRR were generating as much interest as the 1936 International Harvester pickup, and it’s easy to see why.

While it might have the cab of a chopped ’36 Harvester, it’s actually sitting on a custom-built, tube-frame chassis with numerous circle track race car parts, including a quick-change rear end and sprint car front suspension. Don’t forget the rear-mount radiator either.

And the rear bed? As you can probably tell, it comes from a ’59 Chevrolet Impala. It’s a blend of mid-’30s and late-’50s bodywork, and somehow it works. Fittingly, it’s been dubbed the Interpala.

The truck is also sporting Wilwood wide-five hubs with disc brakes on each corner, and some gigantic Mickey Thompson slicks out back that just clear the heavily radiused bodywork.

Something this wild needs a powerplant to match, and here we get a small block Chevy that’s been fitted with a 671 blower that not only makes plenty of power, but also emits a distinct whine.

The blown small block is mated to a 5-speed stick which is operated by this comically-long shift lever with a skull shift knob.

The skull/skeleton theme continues up front with these mechanical hands that hold on the front grille.

Yes, the Interpala is over the top, but it’s also mechanically impressive and fun – just as a rat rod should be.

‘Til Death Do Us Part: The Perfect Impala 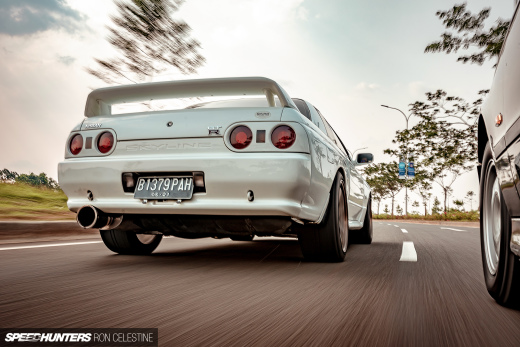 A Spontaneous Sunday Hunting In Indonesia

Brilliant, nice find Mike, I love the shifter! Everytime I see a Rat Rod I cant help but be reminded of the Adams family, they always put a big smile on my face. I just love the raw look of, ah I found this so I'll stick it on the car.... somehow....

When I was at the Mclaren employees car show a few months ago there was an amazing Rat Rod there, but it wasn't a normal RR. It was styled in the same way, nuts and bolts welded here and there by the owner with a great big spiderwed on the roof. But it was painted, carpeted and finished beautifully. I'll have to dig out the pics.


as Kathryn responded I am shocked that a stay at home mom can earn $6652 in four weeks on the internet  see it.......(Copy And Open This)❥━━★━❥ᴵᴵᴵᴵᴵᴵᴵᴵᴵhttp://www.daily.jobs14.ℂℴℳᴵᴵᴵᴵᴵᴵᴵᴵᴵ

TurboHippie Thanks a lot! Yeah these rat rod guys do some crazy stuff. I'm not always a fan of ALL of it, but I always appreciate the creativity.

This is wicked, I like the straps holding the charger down, having seen a slow mo video of a top fuel one blowing off, it's a lot of weight to have flying around in a crash!

us don’t encounter in person very often.
Did I mentio  https://maxbuy.com.vn/thiet-bi-cong-nghiep/thang-nhom/ghe-ban-to/  I really like this
car? You will too by the end of this piece.

purposeful. Time
attack is all or nothing racing. It’s about c http://thangnhomrut.net/danh-muc/thang-nhom-cach-dien/ hasing that one perfect lap, and
in attempting to do so the format often pushes cars and drivers

beyond
breaking point. To win, you need to throw you http://thangnhom-xeday.com/muc-san-pham/thang-nhom/thang-gap-chu-a/ rself out past your limits of
control and somehow hold it together for a whole lap. Under these conditions
one lap can feel like half a life time.

Paul Henshaw
is one driver who felt this battle http://donghonuoc.org/product-category/may-bom-nuoc/ for control wasn’t challenging enough, so to
up the ante he decided to compete with his 45-year-old Datsun 240Z.

Paul Henshaw
is one driver who felt this battle http://donghonuoc.org/product-category/may-bom-nuoc/ for control wasn’t challenging enough, so to
up the ante he decided to compete with his 45-year-old Datsun 240Z.

Why
would some one chooseto
forgo decades of chassis developments in geometry, http://thietbitrogiang.org/danh-muc/sac-va-pin-may-tro-giang/
strength and weight, and compete in this madness with what a lot of
people would consider a massive disadvantage? Because for some people racing

Andy always comes up with some crazy shots, must be the beard! =P
see more detail   http://www.net.pro70.Com

My Uncle Jake just got Volkswagen Passat from only workin part time on a computer... (Copy And Open This)

piston shifter boot and the wide hubs are nice details!