High-end pro touring builds are some of the best parts of the SEMA Show, and every year at the Las Vegas Convention Center you can expect to find dozens of projects pushing the boundaries of what’s possible with a vintage American car.

Displayed at the GM booth, this 1967 Chevrolet Nova is one of those cars that takes pro touring in a new direction, but for a different reason than you might think.

From a distance it looks a lot like some of the other pro touring Nova builds we’ve seen, but when you get close you realize there’s something very different.

It’s dubbed Nova 2.0 and that ‘2.0’ represents the car’s displacement. That’s right, this thing is powered not by a variant of the LS V8, but by a turbocharged 2.0-liter LTG four-cylinder.

The turbo four-banger is used in a number of GM applications these days, and now it’s being offered as a complete crate motor setup for rear-wheel drive applications. There’s also a matching 6-speed manual transmission available.

In addition to the boosted four-cylinder, the Nova packs a modern suspension setup with big Wilwood disc brakes and a set of custom-machined 17-inch wheels based on the ones used on the Camaro Z/28.

Overall, the car is very subtle. The Nova has an understated black exterior and an interior that looks very factory compared to the heavily-modified cabins you often see in SEMA pro touring builds.

Purists might scoff at the idea of a classic Chevy powered by a four-cylinder engine, but I really dig the concept.

I guess time will tell whether more car enthusiasts want to go this route with their own builds, but I can already think of plenty of old GM cars that would be awesome with this setup. Reimagined Cosworth Vega, anyone? 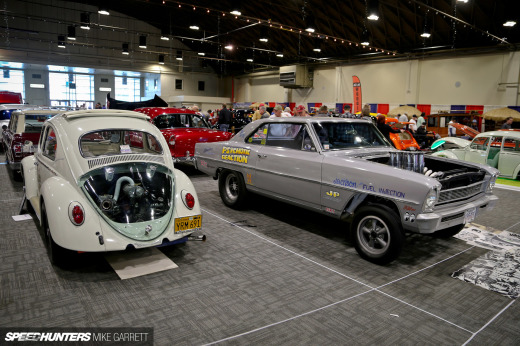 That black!!! Those rims!!!! Bowing down. That thing is SICK!!!!!! Saved 4 of the pictures as I was scrolling. Amazing build!

I'm not much of a fan of SEMA but this car is cool as hell. Love the idea of a small turbo 4 for restomod applications, given the amount of power these engines can produce (i've seen a 2.0 EcoTec making 350 Hp with only a few mods and a custom tune) I think this is only going to get more popular as time goes on. Now I wish Ford would hurry up and release a 3.5 Ecoboost crate engine with a proper standalone controller and a downloadable tune....have naughty ideas where I'd drop that in
Also, is the builder going to release those wheels to the market?

At least it has better balance than its V8 counterparts

I love it.  It wants some fat steelies or maybe some centerline convo pro or something cool.

Start that up at a meet, everyones gonna laugh.
Just....... wrong

I love it. I bet it sounds absurd lol.

I don't know why, but I'm perfectly ok with this car existing.

Let the purists scoff as much as they want

I don't see these taking off until they are produced in the same huge numbers as the V8 truck engines.

I also wonder if there is actually a fuel economy benefit.  The car is not even a little aerodynamic.

I love it....the ecotec 4cyl's have been on my swap radar for a while

MatthewBortot Is that a criticism?  I would actually love to be that guy.

I love that Need For Speed doesn't have one old GM or Mopar to build, only Mustangs. SMFH

I happen to be one that really likes this idea.  This is WAY overdue in my opinion since it will probably give a more 50/50 weight balance if you can get the motor far enough back.  Plus, the Nova was technically a compact car back in its day so this is not completely out of line with what is going on today in the modern era.

@pushrod36 Probably not so much of a benefit I think, but I'd love to see the numbers!

I like the turbo 4 conversion its the unexpected, I would like to see bigger wheels 18 or 19's from some angles 17s look like they are 15s and would add antilag.

The idea of a FR layout turbo 4 banger GM really does stir the pot and I personally think they should bring back the Vega. My dad had actually owned a Cosworth Vega amongst various other big block builds and still talks about it being nimble and just a special experience.
Seeing that there's a market for entry level FR cars like the FRS/BRZ, EcoBoost Mustang, Genesis Coupe 2.0T, and rumours of a Silvia revival from Nissan, GM should totally jump in on the fun.

Shoulda dropped a 4G63 up in the there!

LukeEVOVIII Why add complexity to a build just to accommodate an older tech engine?

colinbrunt I'd second that - the LTG motor needs more RWD cars in GM's lineup - they have an opportunity to wrap a brand new product around that motor - an Alpha platform with a Chevy badge (that isn't the Camaro)... and has a sedan variant

'Coz Evo power! I'm just thinking in the long run if mods wanted to be made there's more potential for it (iI doubt mods would be made though)

Because best 4 cylinder ever made!

I'm all for anything that aggravates purists.

LukeEVOVIII  the stock 4G63 was wanting in the low end torque department IIRC. And you need that in order to make palatable this aberration.

pugmonster GM's approach to the limited wheel size is driven by extensive R&D and track testing their ATS.  They don't even offer a bigger size because they say it would degrade the performance.  Bigger wheels = more weight which requires more brakes, which = more weight.  Not only that, a 4-banger lacks torque and bigger wheels would only magnify that.  I would trust them.

Slappy_Pistons Convo Pros...I hear a mini truck on blocks calling for its wheels back!!!  Sure they're light, but they're not classic, or cutting edge.  I think that's the theme for this build....

Utterly and completely down with this build. Love the out-of-the-box thinking. Yeah everyone expects a V8 but seriously, you don't need 1000hp to get them to move. Just creating a solid build without trying SO hard is refreshing.

I would love to start seeing some smaller builds with some turbo 4's, like 80's Trans-Ams, Vegas, Vega Wagons, etc updated with a solid, modern engine package in a Pro Touring theme. Hell, if I'm gonna imagine, why not a turbo Chevy I4 in a freaking Miata?

I dig this. I don't care much for pro touring but the four is cool. I wish GM would build a nice mini truck. Nobody is building a compact truck any more and this drivetrain would be great.

Love it. Not everything needs a V8 to be cool IMO, and it's good to see the opposite to what's happening in the small car scene where every person throws a LS/V8 in to cars that don't deserve that treatment. A 4 banger in something that would normally have a V8 swap, this is a nice change!

MatthewBortot Who's everyone? Oh, you mean every knuckle dragger, narrow minded V8 lover?


Ouch. It's cool but not that cool.

LukeEVOVIII because Evo power???? The LTG is an ecotec engine, originally designed by Lotus for GM. In the Cobalt SS, GM had a book on what mods were needed to get to 800 HP.

I think this engine can hang just fine and be newer tech than an EVO.

abezzegh87 I've been dreaming of a tweaked old school VW Turbodiesel in an MGB for years. bet that'd see really high mileage, and probably be quicker than the stock vehicle.

Now that's badass and with a 4-banger too?!
I say Chevy should've gone rwd with the Cobalts' a long time ago.

MPistol colinbrunt This is VERY very good thinking right here. GM... write this one down.

D1RGE EXE someone makes a swap kit for na chevy i4 into a miata, could probably be tweaked to take this crate!

KeyboardWarriorNo1758395 From a 2 liter, from the factory, that is slightly above the pack today. 10 years ago boosted 2 liters were around 200.  Yay technology.

Judging by the size of the turbo 275hp is quite impressive. Looks too small for that hp. Curious as to how they did it probably fancy headwork or something.

As for modding, I'm guessing the weak point is the pistons. Can't wait to see what the aftermarket does with these.

Roman64 Slappy_Pistons Lol fair enough, but I do think they'd look the bees nuts on this.

People really like V8s but there where tons of hopped up fours out there on the dry lakes. So why not a four in another Nova.

I'll give you three reasons why this is awesome:

1. Ecotec is widely used in Desert Racing - proven power and reliability and plenty of aftermarket support.
2. Mustang and Camaro both have turbo 4 cylinders now
3. It's not a crate 350

I had seen the video of this build 3-4 months ago, and it's completely amazing

Don't get me wrong, I love Hearing. A throaty V8 as much as the next guy but I am truly excited by a little mix up of the typical PT build. I've seen too many cookie cutter builds that get too much attention and don't ever hit the track.
Wouldn't mind seeing an old school I6 hopped up a bit in some of these cars.

STJ88 mastaworm LukeEVOVIII sr20 or 3sge will argue with dat

John Key NZ more than the v8 it came with...

John Key NZ STJ88 mastaworm LukeEVOVIII Man, you guys are all living in the past. The SR was a corner-cutting, cost-saving design to replace the excellent but expensive CA.
The 4g63 has had a pretty rough history of crankwalk, shitty knock control, and forcing a hard line choice between driveability vs any semblance of power.
The 3sge at least was a pretty good high-strung race engine but it's been surpassed now by things like Honda's K series, Ford's ecotec and ecoboost, and this GM LTG.

I like this idea.  Lighten up a nova a bit and add light wheels and suspension and hopefully end up with a nice powerful car with a light 4 cylinder in the front with better weight balance. Would be really fun for autocross.

I like this idea.  Lighten up a nova a bit and add light wheels and suspension and hopefully end up with a nice powerful car with a light 4 cylinder in the front with better weight balance. Would be really fun for autocross.
OR
Just put one in  my miata.