If I had to pinpoint one thing that attracted me to the Volkswagen scene, it would have to be the incredible attention to detail. This particular aspect is of course not exclusive to the VW Group aftermarket community, but growing up in Ireland it was and remains a rarity. Of course, I don’t mean any disrespect to any other group of enthusiasts, there are incredible – and some less than incredible – builds throughout each community, but it was the Volkswagen guys that caught and held my attention above all others.

My first car – well, van – was a Volkswagen. I had no intention of buying a Volkswagen but at the time, the Caddy 2K ticked all the boxes. I reckoned I owned it about six months before I attended a show in Northampton called Edition38 for the first time. The rest, as they say, is history. I sold the Caddy, bought a BMW, then sold that and am back in a Volkswagen again. This is basically my long and convoluted way of saying that I’m just a tad bit biased towards Volkswagens, whilst having a soft spot for its commercial vehicles.

I tell you this so you can begin to imagine my excitement when Shaun Lewis appeared at Wörthersee with his simply unrivaled T5.

Shaun has been a regular at UK shows with his T5 for as long as I can remember, so I wasn’t really surprised when he told me that he has owned the VW van since 2008. That’s a long time for anyone to own a vehicle.

It’s a thousand lifetimes within the VW scene, where everyone is constantly striving to reinvent themselves and their vehicles. But much like the all-time great VW Group production cars, Shaun’s T5 has been subject to constant evolution rather than regular revolution.

And like many of the best VW builds, you have to be talked through what makes this van special. It’s simplicity and subtlety at their very best. Of course, these are things that are rarely achieved easily…

What do you see when you look at these photos? A red minivan with polished wheels and dropped to the floor? Of course, you would be right. But one of the largest tasks in this build is both the most obvious and inconspicuous.

Up until quite recently, Shaun’s van was exactly that – a full panel van. That was until he decided he wanted to brighten things up a little bit. He cut the steel panels out and fitted original VW glass all round, with a conservative 50 per cent tint. How many of us would have bought a model with glass and just transferred everything over? But that would have been the easy way out. There are no shortcuts here.

Another area with no shortcuts is the ride height and wheel fitment. Shaun has pieced together the perfect kit for his T5, allowing comfort on his commute with show stealing stance available at the touch of a button. Starting out with an AirREX T5-specific kit, he added Air Lift AutoPilot V2 management with custom-specified Gaz rear shocks. But it’s the implementation of the air suspension system that’s most impressive. V2 controller aside, there’s no evidence of an air install anywhere to be seen inside the van. It’s something Shaun’s quite proud of, and understandably, something he’s quite keen to keep to himself.

The 20-inch Rotiform FUCs – inspired by Porsche’s iconic Fuchs-style wheels – play a big part of what makes this van stand out. From the perfect polished finish, to the subtle amount of concavity in the rear – the reason why the back wheels look like they have painted centres. The van has also had a meticulous facelift performed, with a full genuine T5.1 Caravelle kit applied. To ensure a perfect match, the entire van was broken down for a full respray, which extended to powder-coating the crash bars behind the bumpers.

As you can guess, no area has been left unattended. In the brake department there’s a Forge Motorsport 6-piston kit up front and a custom Wilwood/AP Racing setup in the rear. All calipers have been colour matched to the body.

The interior has been treated to more of the same – a subtle overhaul, if there is such a thing. From the custom-trimmed Audi A5 seats to the genuine Caravelle black carpets which adorn the complete interior.

Down the back there’s a Cannon’s Forge rear Rock & Roll bed, which neatly doubles as a rear seating area. Well, you’re going to need somewhere to sit back and enjoy the flat screen and comprehensive in-car entertainment system. Although, I’m sure the idea of someone chilling out in the back with snacks and soft drinks is enough to keep Shaun awake for nights on end…

The stock T5 wheel has been replaced with a MFSW from a 2013 Beetle, along with the centre console from a Caravelle which houses a Kenwood DNX521. The latter controls the entire media and entertainment side of the van. The head unit is a vehicle-specific solution for the T5, available directly from any UK Volkswagen main dealer. It’s one of those rare times where aftermarket and manufacturer come together for the benefit of the consumer.

Some people build 50-yard cars. Some people manage to build 5-yard cars, but this is one of those builds where you can get as close as you like and still not find a single imperfection.

What’s next for Shaun’s T5? With the winter quickly approaching, he already has plans for swapping out the factory 5-speed for a 6-speed gearbox. He figures that whilst the engine and gearbox are out, he should breathe new life into the 1.9-litre TDI motor. With a solid base already created, Shaun reckons upgraded PD150 injectors will remove the current bottleneck and see power climb to somewhere around the 240hp mark with another bump in torque.

He’s seven years – almost eight – into this project and shows no signs of slowing down either. Here’s to seeing what the coming years bring for the big red Volkswagen. 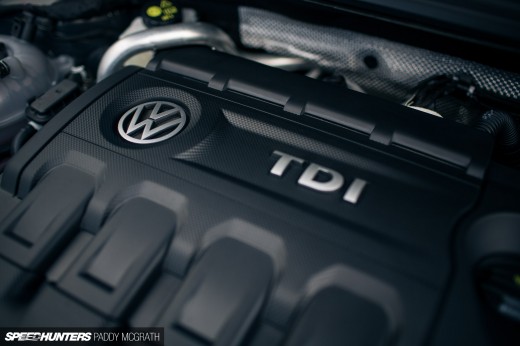 A Little Perspective On Dieselgate…

Quite a beauty! I like the whole van but especially how he has executed the interior. Big fan of VW vans, I owned a T4 Caravelle for 6 years.

Awesome color, stunning build and bunch of perfect photos which just point it out. Until now only affordable thing i wanted was a Merc 190E W201 as cleanly built as this, but this made me think about van..

Now this was an inspiring read! I know some of you are tired of my drawings, but let me just put this one here to show my appreciation;) https://www.youtube.com/watch?v=EgUM-1YVfVw

Not really down for air-ride, but this one gets a thumbs up. It's simple and well put together, diggin the wheel selection too.

Is that Tornado red from a Mk6 golf?
Really inspirational. Goes to show not everything is about wheel size and wings. A legit case for bags too.
This is one of those posts that Ill keep coming back to in 6 months or a year. Then checking out the classifieds.

Is that Tornado red from a Mk6 golf?
Really inspirational. Goes to show not everything is about wheel size and wings. A legit case for bags too.
This is one of those posts that Ill keep coming back to in 6 months or a year. Then checking out the classifieds.

Mr. http://www.speedhunters.com/author/2279972671/, the Vans perfect but I just want to comment on the photography. The pics are as perfect as we usually find here but in this case the choice of backgrounds steps the finished pictures up a few more levels. They really fit the ride and give a nice emotional feel to each one. Well done, Sir and more please.

Oh come on! A lowered diesel van? On SPEEDhunters? Seriously...

iDraw That is awesome

iDraw That is awesome

Paddy McGrath didn't realise you had a Caddy2K back in the day man, you just got all the cooler. Tho I will admit to bias...

The exterior looks spotless. But the interior is not my cup of tea... And lets just say that the car should have automatic transmision and 4Matic.

So nice, interior combo is perfect.