With so much new content surfacing online every minute of the day, sometimes you can miss out on pure gold. So we’ve put together this quick selection of bits and pieces that piqued our interest in recent weeks. Enjoy!

The sound still isn’t exactly going to stir your emotions, but this quick video of Audi’s new-gen E-tron-fitted R8 testing at the ‘Ring is interesting none the less. 450kms on a single charge, 1840kg, a 170kW/460Nm motor powering each rear wheel and a 0-100km/h time of 3.8 seconds – they’re some decent specs. Tesla’s P85D is still quicker though…

Mad Mike gets rowdy at the Goodwood Festival Of Speed

We all know Mad Mike Whiddett and what he and his Mazdas are capable of, so lets dispense with the formalities, sit back and watch all hell break loose up the hill at the recent Goodwood Festival Of Speed from his perspective.

Immerse yourself in this stylish Bond-influenced film that captures the joy of beating the pants off a classic 1968 Mini Cooper S MkII – an exact replica of the Monte Carlo-winning Henry Liddon car – on French snow-covered, mid-winter mountain roads.

Fresh Patina was shot at this year’s Concours D’Elegance at Amelia Island, Florida back in March. Film maker Justin Lapriore always does a great job of capturing the sounds of cars, and the pure, raw growls of these beautiful classic racers deserves 100 per cent volume.

Film maker Will Roegge always seems to get his cameras into the best places, and this video depicting veteran Porsche racer Jeff Zwart’s run up Pikes Peak last weekend is a great example of that. In this particular run, Jeff takes his absolute monster of a turbocharged GT3 Cup car up the hill to take the Time Attack class win – just listen to that turbo spool! 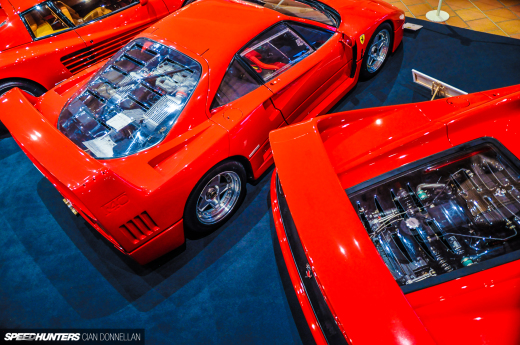 Hitting The Jackpot In Monaco

Mad make was again epic, standout star amongst ledgends. Was there on the Sunday and watched a lot of the live feed. Mazda Le Mans cars Amazing, and time for Mazda to get back on track with more rotarys. Mad Mike is a huge asset for Mazda, Red Bull and did the sport of drifting proud, big time. And he's so approachable, and best of all, he's a rotary man, not just a "paid driver". Mazda couldn't have got a better ambassador. Other highlights, just about everything! The current Le Mans cars, all the rotary Mazdas, Chris meek, the hannu mikkola quatrro and the atmosphere. Hope Mad Mikes already booked for in for next year!

Sounded like an angry chihuahua in the Pikes Peak video

Aw man... that Audi is all tire noise. It's dreadful sounding.

Haters gonna hate on EV's, although they have been around since the beginning of automotive history. That's one of the reasons I admire Jay Leno he is passionate about all sorts of vehicles, cars, bikes, petrol, electric, steam, LPG, hydrogen, carrots...

People think that it's the end of combustion engines, it's not. Hybrid and super efficient turbo cars are going to be the next 25 years. The totally electric engine may have been around since the birth of the car, but it's only recently that they have become any good (Tesla, Fiska etc). And besides the power to charge these comes from dirty power stations, so it's basically a nil change in Co2/greenhouse blah blah anyway. Enjoy what I'm thinking is the new world order in the performance automobile.

Mad Mike KILLS that hill climb, the noise is incredible.

That Jeff Zwart vid goes from impressive at the bottom of the hill to down right scary at the top. That thing sounds nuts! I love the way you see him reach for the gearstick, then realise he's still got enough torque (even in 5th) to just keep pulling anyway so he moves back to the wheel. When you see him drop to 1st in the hairpins and you just know sh*ts about to get sideways haha.

Those multi rotaries sound like optimus prime taking a shizz.....in a good way.

Cool vids. By the way Henry Liddon was a co-driver not a driver for Mini

Pete the perfect pilot Pete!!!!! Thanks for your kind words - Firstly Lord March puts on a hell of an event. I get to wander through the paddocks and see what inspired me growing up and see the cars on track which would ordinarily be museum pieces - then I get to hang out in the drivers lounge with my heroes from all genres of motorsport it is the dream event to be apart of.  He also throws a crazy black tie event for all the drivers which was something else to write home about!
Secondly Mazda are such a RAD, fun group to be involved with their support at Goodwood and globally has been a huge booster for our team and I feel privileged to now represent Mazda in an official capacity. It's a dream turned reality for me having been such a rotary fan myself for so long.
Lets see what happens next year for FOS16 no doubt it will be another epic event!