No matter what kind of event we are at or which automotive genre we are dealing with, we Speedhunters always find ourselves looking for the most unique machines to showcase. And that’s exactly what I found myself during this past weekend at Famoso Raceway.

The event was the annual March Meet nostalgia drag race gathering, which we’re no strangers to, but rather than going with traditional event coverage this year, I decided to spend my time hunting down some of the coolest and most interesting cars in the pits. This radical machine is one of the first that caught my eye.

What you are looking at is a 1962 Pontiac Tempest owned by a young guy named Darren from Palmdale. Although the second generation Tempest was the basis for the legendary Pontiac GTO in 1964, the first generation ’61-’63 cars were very unique in their own right, with four-wheel independent suspension, a rear-mounted transaxle and a standard four-cylinder engine.

Of course, this ’62 Tempest is quite far removed from a stock version. In fact, it’s been a racecar most of its life, with Darren telling me it was likely to have been originally converted sometime in the ’60s. He bought the car about three years ago for $1,500, looking very much like it does here, but with no engine or transmission.

Prior to becoming a rolling chassis it had been equipped with a 440 cubic inch Chrysler big block, but in re-powering the Pontiac, Darren decided to go a different route. It might say ‘Pontiac 421ci’ on the valve covers, and the block might be painted Pontiac blue, but what you are looking at is a 466 cubic inch, high-comp big block Ford V8. “I did it just to mess with people”, Darren says about the motor setup.

The Ford motor is mated to a C6 automatic transmission, and in turn a ’57 Oldsmobile rear end. The latter has likely been in the car since the original race conversion around 50 years ago. Altogether, Darren says the current powertrain should be good for mid 11-second ETs.

The rear fenders were also radiused back in the ’60s, and it was a necessary modification in order for the car to run these 31×13 Mickey Thompson slicks wrapped around old school slot mags.

There’s no shortage of highly competitive, pro-level racecars at the March Meet every year, but it’s always these homebuilt, grassroots cars that interest me the most. Better yet, Darren says he drives the Tempest on the street all the time. 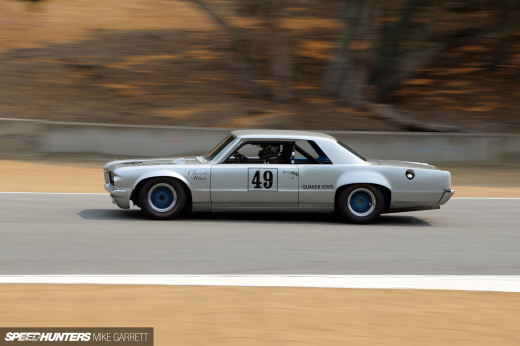 Several cars from the 50s and 60s had an IRS out back, but the vast majority of American cars of the period used solid axles.


My question is why.

Were they cheaper to produce, did they not hold up under the stresses of the drag racing that was popular at the time, were they seemingly too "foreign," what?

it reminds me to a Ford Falcon... nice good looking Gaser/ish....

i read about a guy who drives an honda accord with Chevy Cobalt emblems all around... he used to say that it was a prototype... why? just to fool around with people...

Ice Age  Cheaper, tougher, easier to manufacture. And the Corvair/Tempest IRS used swing arms that on the early models had some handling issues (Hence the whole Unsafe At Any Speed debacle. Ironically, by that point, GM had fixed the issue of their own recognizance and the Corvair was one of the best-handling cars available but the damage was done.)

If he is running a C6 why is there a clutch pedal?

@Lee Wilcox I wonder if one of those pedals is just for the front brakes, for burnouts.

Why do many old-style drag cars have their suspension set up so that the front is angled so high, even when standing still? Does it somehow reduce squat during launch?
And does that benefit offset (what I perceive to be) higher air resistance at the front?

totophi This started back in the late 50's. The tire technology wasn't there like it is today, so racers started to realize that to compensate for that, they needed better weight transfer. They would raise the front ends/lower the rearends to get better transfer plus they would sometimes set the engine back into the firewall and get that weight closer to the rear wheels. The more weight on the rear wheels the better. By the late 60's, the cars started to get lower again and not so nose high. Drag racers also messed around with moving both the front and rear suspension forward on cars to get better weight transfer as well. Some of those cars were also a handful to drive. Some of the gasser cars were running high 9 second 1/4 mile times at 150-ish mph. They were a handful especially with that nose up in the air.

cory27t WOW. Thanks! This is so illuminating.

thats my car and i love it

Darren, I have a friend who would like to talk to you about the history of your car. If you could email me at anskatool@hotmail.com I would appreciate it. Thanks.

Hey mike this Darren the owner of this car. Just wanted to thank you again for the article. I'm hoping to have it at the march meet again this year. Just after the races I was driving it to work and lost the motor but I just got another one in it. Were on track.
Thanks again
Darren (F-bomb)