Is it strange if I say that one of the coolest cars at last weekend’s March Meet wasn’t even a drag car? Well, I think that you’ll agree with me once you see this thing. Say hola to Galaxia De La Baja – a 1964 Ford Galaxie built by Triple Nickel Racing.

Considering I was at a drag event, when I first spotted this high-riding Ford parked down near the end of the pits, I assumed it was a gasser of some sort. But as I got closer I realized that the Galaxie was actually built for off-road racing.

An off-road Galaxie? That’s right. And it’s not just an ‘off-road style’ build with big tires and bit more suspension travel – this is a legit all-terrain racer built for competition in events like the famous Mexican 1000.

Its credentials become apparent when you peek in the cockpit and see things like the full rollcage, PRP race seats and Lowrance GPS chartplotter.

The Galaxie’s suspension and chassis is no joke either. Check the Fox shocks with external reservoirs visible in the rear.

But despite all of the high-end race parts on this car, the whole thing is still quite simple. It’s using a modified version of the original Galaxie frame, is 2WD with a straight axle conversion up front, and is powered by a stroked 427 Windsor small bock. The trans is an old school Ford Toploader and the rear end is Ford 9-inch fare.

A pair of spare tires have also been custom mounted in the Galaxie’s trunk, and you just gotta love the bare metal finish.

And if for some reason you thought this is all just for show, here’s a cool video of the Triple Nickle crew putting the car through its paces down Mexico way.

Leave it to us to head to a drag racing meet and come back with a story on a totally unique off-road build. But it’s all part of the fun.

And with a car as cool and unusual as this one, can you really blame us? 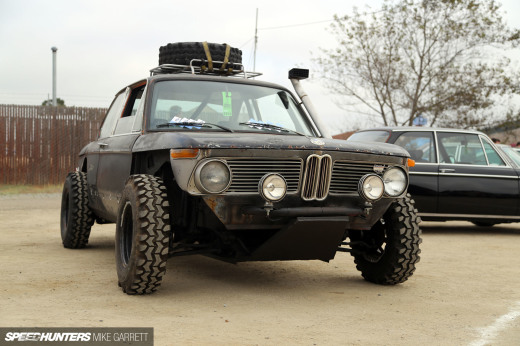 Vegas To Monterey In A BMW 2002 Off-Roader

BEST THING ON SPEEDHUNTERS EVER.

that class is starting to become popular. I know of a nova a late 60s mopar and a few others that are racing

We know you put this here as a joke/weird stuff item, But this is so much cooler and more interesting than another metric drifter or silly stance article. How about a follow up story with real detail pics and a better written story? Right, your teenage  fan base won't go for that.

cutterjones13 I'm sure if Mike had more time he would have done more with it, sometimes these spotlight type articles can appear more tease than temptation. The freak type articles are always popular due to their universal 'WTF?' appeal. So we'd do more if we could, the fan base love it!

@chris chabre Oh lord. Another event type I have to visit. The injustice!

these oddball posts are why i love speedhunters !

Looks cool. So, how should we call this car? Off-road gasser maybe?

thanks for the awesome post, so inspirational. i just dont know how to tell the wife i need to take a little trip to mexico... in the truck... with all my money.

How do they prevent this thing from getting rusted in a week?

AdamBezzegh probably a clear coat over the bare metal

Man I have been wanting to build something like this for years.  I think a Maverick would be cool too.  Or maybe an early Mustang.  A '64-'65 Chevelle or Malibu.  Maybe a wagon.  Oh man I could go on.  I'm surprised they used a straight axle in the Galaxie build though.  I would of thought IFS upront.  Or even a TTB setup being its a Ford.  But man this is cool.

Speedhunters_Bryn tell me about it!!!! Try living on the East Coast and wanting to own a pre runner style truck haha..There arent enough things to jump!! For awhile I was searching out places to move so I could stay in the Hot Rod/Race Fab Industry... I looked into Murrieta California just so I could build desert racers haha

Most definitely a build to behold, thanks for the post!

Best daily driver ever?
Hahahaha. I would rock this shit all day long!

cool car but whats with the straight axle up front..?

I wanna drive this to the grocery store

LavarBowers Yea I'm surprised no modified IFS or at least a TTB setup.

LavarBowers Not sure exactly , but it seems to have worked for them.

@FunkyChild No pavement? No problem.

nwbdwb Glad you liked it!

Obesemustang That would be radical.

Obesemustang dude it's a Mustang...

Kinda reminds me off this in its peculiarity.

I race the Baja in a '69 VW Beetle and even  I have to say this is five flavors of awesome.

I liked the pictures because they showed kind of what an off-roading vehicle looks like.   When going off-road, I can see how someone would want to make sure they had the right parts for it.   The last thing that someone might want is to cause problems to their vehicle due to a lack of preparation. http://www.jeeppartscolumbusohio.com/Exhaust-Systems-Plain-City-OH.html