SHARE The Best Of The Rest At Auto Legends

Getting the imagination going

I really can’t quite put my finger on it, but Japanese vintage rides seem to have quite a strong lure, a sort of magnetism that attracts unsuspecting car guys without much warning. Head to a show like Auto Legends and you will leave at the end of the day with a list of about five cars that you will want to own in the near future, plus a corresponding list of all mods you would do to each. And that’s precisely it: the countless looks, styles and accessories available for these cars get our imagination going, as it’s just so easy to create something unique.

Plus, let’s face it, there is something so damn right about seeing a slammed Kyusha on vintage rims…

…much like this deep purple Laurel from Dual Factory. While cars like the Hakosuka or Kenmeri versions of the Skyline will always bask in almost mainstream popularity, I’ve come to realize that the Laurel has probably become my favorite Japanese ’70s ride.

It has almost Kenmeri-like proportions, but with a slightly less angular design, and it just looks so damn right on so many different rims.

I mean, seriously, look at this one for example! It just takes the addition of a bucktooth front spoiler and the right set of wheels…

…in this case a very clean set of Techno Phantoms, to achieve perfection! Oh and yes, a nicely tuned L28 under the hood helps too.

Or how about a pristine 610 Bluebird? But Auto Legends is about so much more. Turn your head away from the Japanese vintage car section and at times it’s hard to believe what you come across.

Take this Koenig-kitted Ferrari 328 GTS for example. This was part of a massive display by the recently founded Galleria Scala, a new supercar maintenance and tuning shop set up by the owner of the road-registered Schuppan 962 we featured last year.

This car is out of his collection and has just been completely refreshed. It’s been finished off with a white vinyl wrap to protect the original red paint underneath.

Next to it was this 930 race car that he has put up for sale. This thing must be a ton of fun to drive, boasting 370hp and a curb weight of only 950kg.

Slammed wagon anyone? Brest Total Auto Body Service brought this CF Accord wagon, which did a good job of fusing the ever so popular slammed look with an almost VIP take – especially the rear fenders and onikyan.

…and of course a kei truck!

We have come across Car Shop Friend at shows like the Nostalgic 2 Days; they are the go-to guys for anything and everything Nissan Leopard related, a luxurious and pretty powerful coupé that Nissan built to steal sales away from the popular Soarer. They had their usual lineup of beautifully maintained examples for sale.

Aside from the power-checks on a rolling road dyno that were held throughout the weekend, there was also a chance for showgoers to get right up to all the wild drag cars present. They even took them outside…

…and revved their engines for maximum impact. This Akira funny car almost blew one of my eardrums out!

…there was a steady stream of live music coming from the stage inside the exhibition hall as famous Japanese bands rocked their socks off!

Star Road were a bit late at setting up their booth, but you can always count on them to show off some seriously nice vintage machines. However it wasn’t their cars that most were looking at, but rather the new Glowstar wheels they created in partnership with Work Wheels.

And talking of wheels, it was cool to see that RAYS went for something other than a Skyline or Z to show off their ever popular vintage version of the TE37s, getting the job done rather well with this Mark II.

For those into big muscle, there was plenty to look at. From supercharged Camaros…

…to countless generations of Mustangs and Corvettes in various states of tune.

But no matter how much variety I was confronted with, I found myself going back time and time again to the Kyusha rides that stood out the most. This S30…

…on Hayashi Racing Team Yayoi ‘Sakura’ rims was definitely one of them.

Finding an MR2 among all these cars was quite a surprise, but a welcome one for sure.

If you were following our Instagram feed during the show you may remember having seen this work in progress Kenmeri from Rocky Auto. Except it’s not a Kenmeri…

You see this is a little experiment they are doing, building a KPGC110 body over an R32 chassis.

It’s a way of having all the benefits of a more modern car coupled with the looks of a revered classic. A lot of you complained it’s an auto – well, the transmission will be an option. The donor car came like this and they have yet to decide what it will run when finished. The engine is unknown too; however I did see a pair of lonely VR38DETTs at their workshops the other month. Now that would be interesting!

There were definitely a lack of rotaries at the show, but what was there was quite special – like this Toy Box SA22…

…sporting a very nicely presented, peripherally-ported 13B under its louvered hood.

It was also cool to see the sort of support Speedhunters keeps getting in Japan. We plan to have more of a presence with our merchandise booth from now on, so if you happen to see us make sure you drop by and say hello!

While we have taken a nice look at what the Auto Legend was all about, it’s now time to head outside into the parking lot to finish off the coverage. If Kaido Racers do it for you, I suggest you don’t miss the gallery post I have planned! 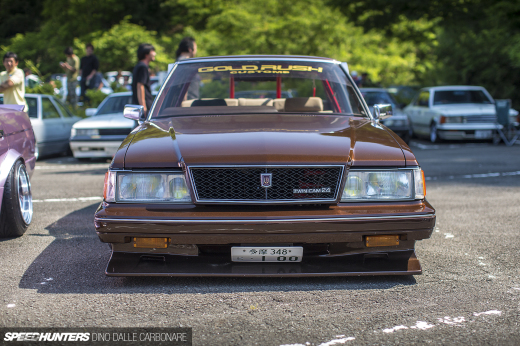 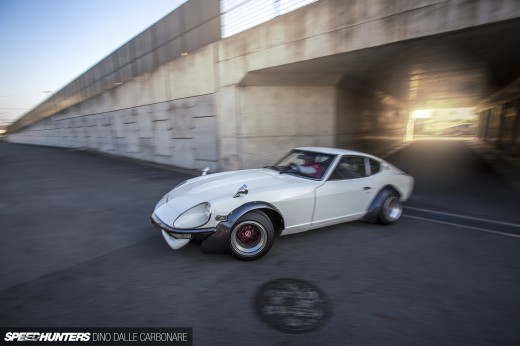 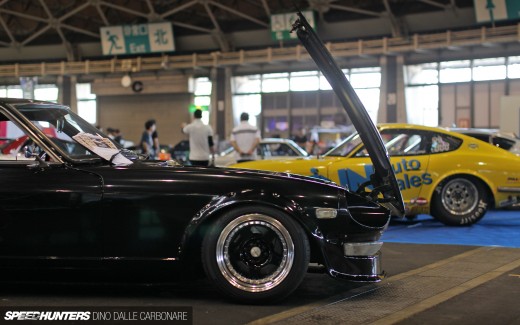 Great to see more classic Japanese cars. By the way, the mobile site is not as easy to use as the old site and consumes more data. Also, the new layout is very similar to Farmofminds' website layout!

Unassuming though it may be, that RX-7 appears to be more than meets the eye...  That's a pretty early VIN#, and I'm pretty sure those are Mazda Factory Racing (MFR) PP housings.  Nice little piece of unobtanium there.
I guess Auto Legends will now join Tuning Powers and TAS to make my top three favorite Japanese car shows.  Hopefully this will be an annual feature.

Swonz Wow.. you're not wrong! Never heard of FarOfMinds, will check it out, looks super nice

Swonz Wow.. you're not wrong! Never heard of FarOfMinds, will check it out, looks super nice

What a cool event you got there Dino. How about you include a story about what are visitor doing at that event such as purchasing a merchandise or anything else that people does when they carhunting for ideas for their car or just strolling around on the event. I suppose that also part of car culture right?

Will you guys have a booth at TAS?

LouisSoon Will you be coming?

@Kart Works There wasn't much of that going on, not as much as say the Nostalgic 2 Days, but there were a few shops displaying their own products and spares

Simply P See I was wondering why it all looked so factory.  Rarity indeed then!

Dino, you're apparently not the only one liking Laurels. Early model "butaketsu" and "gamera" Laurel prices have been skyrocketing recently.

tomok I'm not even going to check...don't need another car! Must rest! lol

that has got to be the best accord wagon ive ever seen. and im digging the green breaks too.