As Larry and I scouted for feature cars at Bonneville a couple of weeks ago we noticed that there were plenty of coupes, roadsters, modifieds and rat rods to choose from – but not too many kustoms. So when we spotted this clean Merc I pulled right over and scurried around looking for the owner. After a few minutes with no success I had to move on to my second resort, the dreaded note left on the seat.

Fortunately the owner, Chuck Teixeira, didn’t seem to mind me leaving a note and business card tucked carefully into his seat cushion. Reaching into someone else’s car is really something I despise, but I wanted him to know we dug his car. That evening my phone rang and it was Chuck, excited about the opportunity for a feature shoot.

Chuck was a little worried about the grime and bugs, but we insisted they stay. Why? Because they tell a story – one of a guy cruising for over 10 hours to Bonneville in the car he built with his own hands and imagination.

On this particular morning Larry and I raced the sun with hopes of good light for the shoot. Mission accomplished.

As Larry ran around like a maniac to time his shots with the approaching sun Chuck and I had a chance to talk about his build.

Chuck told me how he spent eight years building his car, and how he did everything himself, and how he was a Mechanical Engineer at Specialized Bicycles by day. I had to stop him though, because it was sounding a lot like my own build story. It’s pretty amazing how quickly you can make a new friend when things like cars, fabrication and design are the topics of discussion. 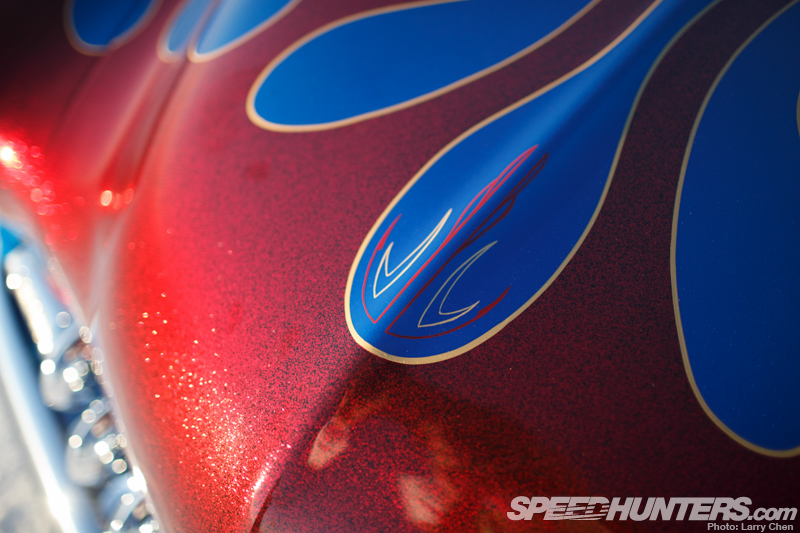 Chuck had me beat though. He not only envisioned, engineered and executed all of the drivetrain, suspension and body mods, he also did his own paint and upholstery. Don’t you just want to shake his hand?

People told him to not go too wild on the paint, that the heavy Roth flake would be tacky – but he went for it anyways. Here’s proof that when you have a vision you’re best served to stick with it.

Chuck is particularly fond of his flame job, and rightfully so. Look at how the flames fill the front half of the car, following the classic Merc bodyline. The shape’s right too, they have that perfect traditional flavor.

Another part of the car that Chuck is proud of is the drivetrain. Many kustoms get by with a so-so engine, but Chuck had a little fun here by way of ordering a catalog worth of speed parts for his 1956 Hemi. On top of that he machined his own accessory drive system (yes, even the pulleys), positioning the belts low to keep the engine looking simple and clean.

When you get into a project of this magnitude, you end up making a lot of things by hand. Problem is, most people will never notice until they’re pointed out. In this case Chuck reworked the old oil bath Caddy air cleaner to accept a regular filter and mate it to his Holley carburetor.

You can’t see the Muncie four-speed bolted behind the Hemi, but the extra pedal gives it away. Most kustom guys don’t worry too much about hot-rodding around, but Chuck wanted his car to be fun to drive. I love the use of factory-style rubber pedals in a car that’s anything but stock. Also notice the matching carpet and mats: You can’t buy those. Chuck busted out a sewing machine and learned how to make every shred of upholstery on the interior, including edging the carpet and putting factory style rubber on the mats.

Of course you can’t say “upholstery” when referencing a kustom without imagining classic tuck ‘n roll pleats everywhere. Chuck knew this and he made the little sewing machine comply – sometimes through more layers of sparkly vinyl than it liked.

Laying down straight, parallel and evenly spaced pleats is no easy feat, especially for a first-timer. Notice how much he mixed up the color palette too, yet it holds together nicely.

See those RCA speaker grilles? Those aren’t in a catalog either. Chuck drew them up and had them cut on a waterjet before polishing and installing vintage gold speaker mesh on the back.

The instrument panel just needed a good cleaning and some paint work.

Chuck painted the steering wheel to match, and introduced yet another color that works with the flow of the interior. He scored the tiki at a swap meet in Hawaii, then machined a taper onto the long stainless shift lever before bending it to fit around the dropped factory bench seat.

Even the sun visors couldn’t escape the kustom treatment; which brings me to an aspect which that really impressed me on this build. For all the custom work he undertook, Chuck still included things like visors, air conditioning and windshield wipers to make sure the car was comfortable going down the road, all without taking away from the look.

Which is precisely why Chuck built his Merc, to take it out and enjoy it. I’ve seen plenty of rat rods coated in salt, but seeing the white stuff crust up on a beautiful kustom is another level entirely.

The bumpers are stock Mercury, with the exception of shaved mounting bolts. For the tail lights Chuck came up with an idea that echoes the commonly utilized ’50 Pontiac light…

… by flipping ’59 Cadillac lights backwards. This is a tunneled tail light like I’ve never seen before.

I wanted to make sure Larry photographed the car with the windows up, because frankly this is where a lot of chops fall short. Chuck got rid of the front and back vent windows and had one-piece glass made. He also made the polished window trim out of 1/2-inch aluminum plate which he cut on a bandsaw before rounding the edges with a wood router.

I’d be remiss if I didn’t mention the fact that Chuck’s Merc has four doors, but I’ve left it for last to prove a point.

Weren’t you nodding your head and agreeing that this is a bitchin’ kustom that whole time?

Therein lies the genius of this build: Chuck took a sedan that most would pass on and gave it a perfect kustom silhouette with all the right touches. This guy’s got skills.

SICK! this is on another level! congrats chuck and job well done!

SICK! this is on another level! congrats chuck and job well done!

This was just featured in Hotrod mag. Did you supply the pics?

Capital E I did, that is awesome of you to notice!