It’s one of those things that doesn’t really need to be pointed out, but I’m going to do so anyways. Gatebil is an absolute car killer. With a track that is hot for the best part of eleven hours each day, for three days, you know there will be destruction.

The first casualty is usually the rubber. Honestly, I reckon that Gatebil must be responsible for keeping the tyre industry booming.

It’s a long track, with plenty of opportunity for sideways shenanigans.

Drivers and teams do come prepared, and prepared they must be. If trying hard enough, it was easily possible to destroy a set of brand new tyres within a single lap.

Running out of tread isn’t really the issue for most drivers, particularly those of Scandinavian descent.

Provided there’s still something resembling a tyre protecting the rim, it’s quite acceptable to continue on until there’s a loud bang followed immediately by pieces of rubber flying in different directions.

The downside to this strategy of ‘maximum usage’ is that when things let go, they tend to bring other parts with them.

The other downside is that it also leaves the track with lots of debris. Thankfully there’s a sweeper machine which runs around (whilst the track is still hot of course) brushing the worst of it to one side.

I don’t envy those who are responsible for removing tyres and disposing of the remaining carcasses.

As Gatebil is an equal opportunities destroyer, it’s not just rear tyres…

… but all four that are equally likely to be destroyed.

By Gatebil standards, this is considered ‘scrubbed in’.

There’s more to be destroyed than just rubber too – body panels aren’t safe either.

Like a big and expensive jigsaw puzzle, someone’s going to have fun with the zip ties later.

Who said drift cars are impractical?

Unfortunately for some, the destruction is slightly more permanent and they need to be recovered by the giant red, moving clipping point.

It’s never nice to see someone’s weekend come to a premature end but such is life.

Although most mechanical failures aren’t immediately obvious, some on the other hand are at least easy to identify. Oh dear.

The next item on the casualty list was usually a gearbox or other part of the driveline.

This generally occurs when the gears decide they no longer like each other and go their separate ways.

One of the unexpected causes of destruction last weekend was, on more than one occasion, the dreaded noise regulations.

With a maximum decibel limit of 100db, a lot of teams and drivers struggled to quieten their motors to meet the circuit’s regulation. However, by modifying and installing extra mufflers and other devices to reduce their decibel count, the resulting restrictions created engine-killing levels of back pressure which affected our own Mad Mike…

… and Irish driver Martin Ffrench’s V8 PS13. No doubt there were other casualties in the noise level war too.

Another thing which most seem to forget about is the primary by-product of so much tyre slaying.

That is of course the lingering tyre smoke. Although it doesn’t wreck havoc, it does ruin many a good photograph by overstaying its welcome.

… and it was possible to probably get a little bit too close to the action. Can you get too close? Nah…

The other side of the track wasn’t much better either to be honest, and plenty of us are still removing evidence of Norwegian geology from our faces and clothing. Tyres, bodywork, gearboxes, driveshafts, turbos, pistons, rods, cranks, bearings, valves, apex seals and rocks to faces. All in a weekend’s work when at Gatebil… 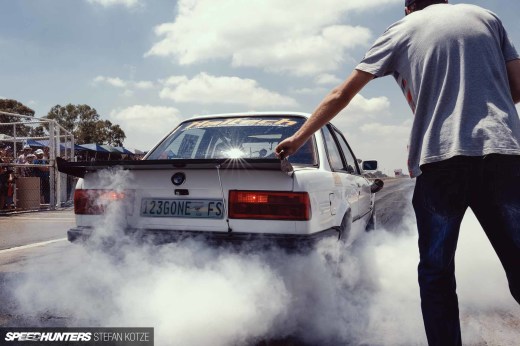