It’s summer here in Arizona, and every summer I swear off working on cars. It’s just too hot to be out in the garage when the coolest it gets at night is still 90° F. Of course every summer I find a new excuse to go and sweat in the garage and this year it’s because the owner of this ’65 Ford Galaxie is counting on me to have it ready to drive. The only way to work comfortably this time of year is to set the alarm clock to go off early and shuffle cars around on the driveway before it’s time to go to work.

Having new parts waiting on the bench does help me get out to the shop early though. This time it was a new air spring that needed to be installed.

The rear of the Galaxie was lifting unevenly, and finally the leak became bad enough that I could easily tell why. I normally prefer double convoluted bags, but it would be a lot of work to convert this car over so I just went with a direct replacement. This isn’t really a common problem to have anyways.

After cleaning the old teflon tape from the threads I applied new stuff.  I show you this image to illustrate the proper direction to wrap teflon tape, because if you do it backwards it will peel off as you thread in the fitting. My ritual is to hold the fitting in my right hand and wrap the tape down with my left hand.

I spun in the freshly taped fitting…

… and dropped the upper mount into place. That little nub was keeping it from sitting flat though.

A flat file made quick work of it. If I had let the mount (and the weight of the car) press down on this high spot it could have cracked the plastic top of the air bag. Am I paranoid or just paying close attention to the details? I’ll take either.

You always want to use Grade 5 hardware and avoid overtightening the mounting bolts on airbags.

Finally I got the new air spring installed and could move on to other things.

In our last installment I detailed the installation of new gauges. There were a couple of loose ends to tie up with the install though, like the speedometer cable that was stretched tight as a banjo string.

Without forcing it into place, this is where it wanted to sit. I think this might leak though…

After calling some parts houses I tracked down a new cable, this time a little longer.

I swapped over the little drive gear on the trans end…

… and it jumped right in the hole.

If you remember I used a 9-pin connector to install the new gauge cluster. Notice there’s one pin missing though?

That would be the fuel level wire.

Removing the factory plug I checked the resistance across the two terminals. A fuel gauge is just an ohm-meter, and Fords typically read 73-10 ohms across the range from full to empty, so this 24 ohm reading made sense (and it was time to get gas). Knowing the resistance on the signal wire would also help me verify that I had the correct wire at the instrument panel.

I was hoping the factory wiring was still intact, so I started digging a little.

Fortunately the factory harness was sitting right under the sill plate where I had hoped. The resistance is a little different here because I grounded my meter on the door latch striker, creating a different circuit than the one back at the fuel sender. It was still close enough to be sure this was the correct wire.

At the dash I found the wire bundled up with a few other unused wires and confirmed that it was the right one.

I crimped on a new terminal and plugged the instrument cluster back in.

I put it all back together and turned the key to see all the gauges jump to life. Things should always be this easy!

With the gauge job wrapped up I turned my attention to a nagging problem: there was a rattle under the hood and I tracked it down to this one loose bolt.

Once I extracted the wiggly fastener I realized someone had stuck an 8mm bolt where a 5/16″ one belonged.  Tsk, tsk…

With the proper bolt threading in freely I reassembled everything and the rattle was gone. It’s the little things that count for so much.

Remember the mid-’90s interior? According to that sign, the car should have electronic climate control, but since I wasn’t able to find a heater core, A/C compressor, or any of the other requisite climate control parts I thought maybe this panel should disappear. Besides, I needed a place to mount the air gauge that I removed from the instrument panel.

I acquired a set of Ford radio removal tools, something I haven’t had a use for in a decade…

… but they sure made pulling the panel easy.

As I was removing the climate control panel I was also brainstorming how I would attach the new air gauge panel in its place. I thought I would gut the unit and see if I could use any of the mounting parts.

It looked promising, and I had an idea. I set the fence on my little bandsaw to ‘deli slice.’

This is the part where you find out how well your blade is tracking. I only had one part, so the instant the cut veered off I stopped and made adjustments. Funny how it can take 30 minutes to make a 30 second cut, isn’t it?

… then I went and found my transfer punches in the cabinet. If you fabricate anything, these will come in handy.

First you choose a punch that fits snugly in the hole you want to transfer to the work piece, then you smack it with a hammer…

…leaving a perfectly centered dimple to drill on. Since there were four holes I clamped the old face to my aluminum so it wouldn’t wander.

While the calipers were out I scribed the length and width of my panel onto the aluminum. Please don’t do this with an expensive set – I keep the beaters around for this type of stuff.

With the general layout done I laid the hole saw on the panel to visualize the spacing. You can measure all you want, but sometimes you just have to trust your eye.

Next I cut the panel out with some waste on the edges so I could clamp it to the drill press. I have a fairly fine-tooth blade installed right now so I can cut metals with the same saw.

Here’s my current tool holder for the drill press, and old transmission pan that leaked. In it I keep a scrap of wood to put under the work piece, an oil can, some clamps and the chuck key.

I popped some holes in the panel…

…then I cut it to size and scribed lines so I would know where to glue the mounting portion.

I roughed up the aluminum and plastic before applying a two-part epoxy. I ran the epoxy up the sides to get more surface area and strengthen the bond.

Finally I could install the gauges in the panel…

… and simply pop the panel back in place, wrapping up the work I’ll be doing to the Galaxie for now.

It’s time to send her back home and see what the owner thinks. Hopefully I’ll be dropping off the Galaxie and bringing back his slammed ’59 Parkwood wagon! 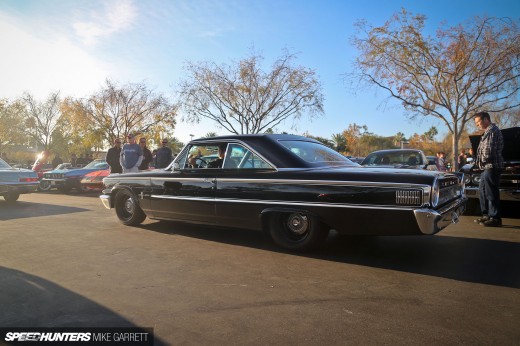 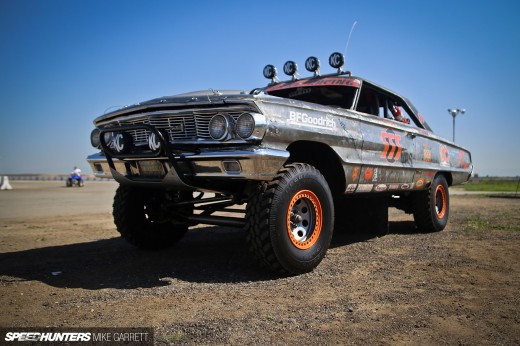 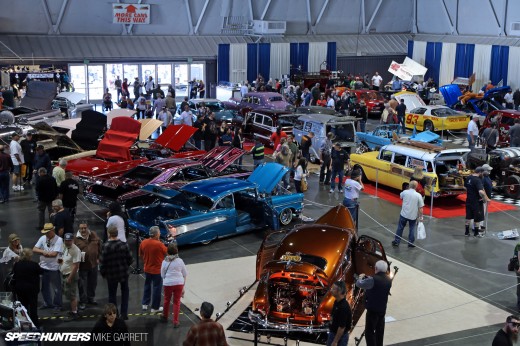