Ok, I’m going to be completely straight with you. Before this shoot, I didn’t know a huge amount about gasser cars. So this was an incredibly cool experience. It also transpired pretty quickly that this wasn’t actually a gasser – simply a car that has elements of the style. Actually this car has lots of styles going on. So what is this Volvo thing, then? It’s a baptism of fire! That’s what it is!

Take a good look at this picture above. The car you see, is without a shadow of a doubt, one of the wildest vehicles I have ever got to spend some time with. Cars are sometimes considered to be pieces of art by some, but there’s no doubt in my mind that this jaw-dropping Volvo Amazon with Hemi motor deserves a place in the history of time. I genuinely think that this will strike a chord with each and every one of you.

One thing’s for sure: whether you’re a lover or a hater of this vehicle on face value, you can’t help but get drawn in by it. You immediately want to take a closer look. The first feelings for me were mainly that of confusion. I mean, what the hell is going on? That jacked-up front end, those mega-wide rear tyres and the monstrous intake up front… it’s a sight to behold. I mean, this thing looks hungry! It’s a scary looking contraption. I say contraption because it’s not technically a Volvo model any more. The Chrysler Hemi motor sees to that. So what is it then if it’s not a Volvo?

It’s a Hemizon! The huge Hoosier stock car slicks have been installed for one purpose and one purpose only: BURNOUTS! And that’s what this car is all about: going crazy! With that in mind, and like many Scandinavian builds, form is dictated firmly by function and the wheel fitment is proof of this. As I read that last sentence back it almost seems more sensible to use the term body fitment, rather than the usual wheel fitment descriptive. It looks to me like the bodyshell is almost an afterthought to the rolling chassis, but I can assure you that is not the case.

No, in fact, everything was an afterthought to the engine. I want to talk you though the car’s heart – its crazy soul – much more but I’ll come to that a little later on in this feature. First let’s explore the roots of this gorgeous-looking shell.

The owner and builder of this car is interested in things of the metal variety. Always has been. And it shows. Henrik Larsson is his name and he’s the owner of Larsson Customizing. Henrik’s a super cool guy with a great sense of humour. When I asked him why he liked gasser cars – he simply laughed and said that he’s not really into them! Or at least he wasn’t until this build. Henrik’s passion is Pro Street Cars and hot rods. But he has a very open mind.

A mind so open in fact, that he allowed Emanuel Sandél, who works for Larsson, to bring some gasser craziness into his thought process to create this hybrid of tuning styles. And crazy this build most certainly is. But it’s almost more stunning than it is crazy. It’s stunning in more than one way as well. Yes, it’s a visual assault, but it’s a visual assault that was almost never to be. Why? Because it was pulled from the junk yard. It was almost crushed. “There was no trunk, no fenders, seats, windows or any of the parts that made it a car. Just a shell,” Henrik explains.

So the shell itself has been brought back from the dead. The Hemizon is actually a zombie! If you’re familiar with gasser cars you will know that weight reduction is often employed to allow for fast quarter mile times, and items like fibreglass body panels and plexiglass windows all play a part of this build.

Often the new lightweight glass would be coloured for added stupidity. Henrik admits, laughingly, that the green hue can make you feel a little bit nauseous and disorientated after a long time of being in the interior. As you can see, the innards of the Hemizon are as radical as the exterior. The interior in Henrik’s creation almost looks poisonous though! But nothing is quite as intoxicating as the motor…

There are four pipes poking out of the wings and towards the sky, which suggest that this car has a serious bark.

Taking a step back and working your way around the vehicle brings the enormity of the motor into full view. It’s something to be impressed by.

And here is the imposing power plant. The size of it is actually considered to be small. Yes, you read that right – this is a 331 cubic inch Chrysler V8 Hemi motor from 1954. The engine was purchased from a customer who was removing it from his race car. At the time Henrik had no clue what he was going to fit the motor into, but he knew he had to have it. Why? Quite simply because of the noise it made. That, to me, seems like a perfectly good reason!

For quite some time, the 331 Hemi sat on a stand in the corner of Larsson Customizing. It wasn’t left unused though. Oh no. Every Friday, Henrik and his team would get some fuel and start it up on the stand to listen to the V8 roar into life and sing angrily until the fuel ran out.

“We love Fridays!” smiled Henrik. “What about the shop upstairs?” I asked. “They hate Fridays!” he laughed. So it was motor first and everything else later. It’s a plan that you’ve got to admire.

Facing the Hemizon square on is kind of scary. It looks hungry.

The super big intake could potentially eat you.

To hear this car start up is insane. To see the Hemizon move is a beautiful experience. It’s art in motion.

This ’54 lump is also kind of special because it’s the last year Chrysler made that motor. It’s also the only year that the extended bell housing wasn’t employed on the 331.

The pre-’54 motors had extended bell housings which could be more challenging to fit into other cars. The power output is beefed up by an old GMC 6-71 blower with on-the-top double Edelbrock 650 carburettors.

The power’s not huge: 400-500hp is expected once it’s fully developed. But it’s the brutal delivery that’s impressive. Just the bark of the motor displays how incredibly instant the throttle response is. This of course, makes this motor perfect for laying down rubber.

The front axle is an old hot rod set-up combined with some drag racing parts from 1960 which include some very skinny wheels of unknown origin.

The lightweight front axle is complemented by a small fuel tank which keeps weight down. Interestingly, Henrik is talking about fitting the radiator system at the rear to allow for a further transferring of weight.

As previously mentioned, Henrik’s passion is metalwork and the art of creating panels and parts. He showed us how it’s possible to make pretty much any body part for a car with just four tools. We’ll bring you an in-depth shop tour story detailing this impressive skill. But in the meantime I just want to show some appreciation for the lovely way this metal body has been crafted. It’s so raw and yet so well executed. Don’t take this the wrong way, but there’s something kind of sensual about metalwork like this. It’s honest and true.

Speaking of honesty and truth: Henrik opted to leave this classic piece of rot that almost all Amazon’s suffer from. The cars collect salt and the result of that is this corrosion just about the headlights. These particular headlights are convex items from the older Volvos. Henrik installed these because they look cooler.

The rear axle is an 8.75 Chrysler item from 1950-1960 and the back end is pretty sparse as you can see. There’s still a bit more development to go on out back. The language barrier was a bit of an issue, but from what I can gather from Henrik, his main objective is to do the very best burnouts possible!

The inside of this car is a beautiful array of metalwork fabrication. These door cards have been hand-rolled by Henrik to create what can only be described as a kind of faux-leather diamond quilt. Albeit made from sheet metal. They’re stunning and completely unique. I’ve never seen anything like it. The skill involved to create such perfectly crafted panels like this is very impressive. A dying art? Maybe so. But at least there’s people like Mr Larsson who are still extremely passionate about sheet metal. So much so, that I don’t think I’ve ever seen a vehicle with so much creative fabrication. Nothing is rushed with Larsson; everything is very thoughtful.

And so to the driver’s seat. This is where Rat Fink’s Zombie Nightmare takes place. Rod and Henrik joked that this car would be a super-intense dream gone wrong for Rat Fink. During his sleep Rat Fink would experience a succession of images, concepts, emotions and sensations. He’s supposed to be in a hot rod, but in actual fact he’s in this Volvo’s driving seat. This car breaks the rules and it’s so wrong – this nightmare drive shouldn’t be happening to Rat Fink!

This car is so off-key it just shouldn’t work. On paper it doesn’t add up. But Henrik Larsson’s managed to pull this off perfectly. It seems to me that the Scandinavian people love to break with convention. Whether this is on purpose or not, I haven’t worked out yet. I don’t know if these guys are even aware of the rules to be honest, or maybe they just don’t like them.

To me, though, this car isn’t a nightmare at all. It’s a vehicle that rhymes with sensory overload. I absolutely love the way Henrik and the team at Larsson Customizing have brought the shell back from the dead. I admire the skill involved and the fabrication work. And I’m very excited to see this car used with no mercy whatsoever. It might be Rat Fink’s Zombie Nightmare, but for me, and anyone that’s into fantastic stupidity in its greatest form, this Hemizon is positively dreamy.

Other gasser stories on Speedhunters 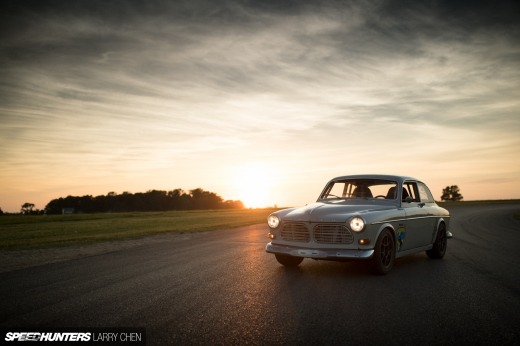 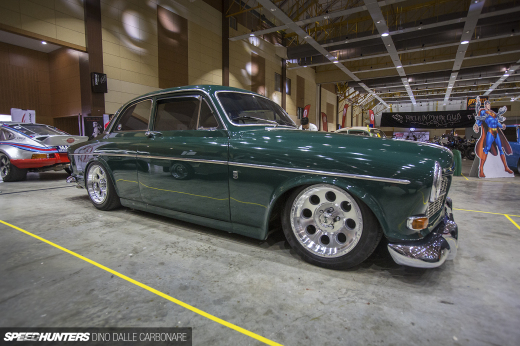 A Shakotan Amazon In Malaysia 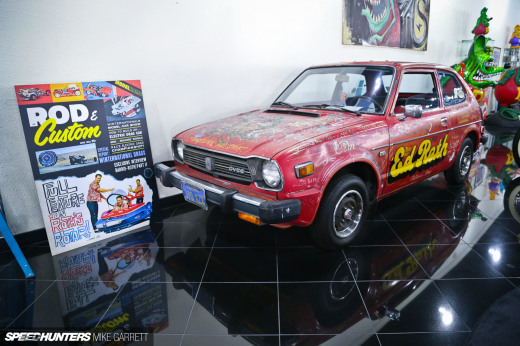