How do you photograph #MaximumAttack? That’s a good question, and it seems recently I have been receiving plenty of emails asking me about photography advice. I discussed this with head honcho Rod Chong and he came up with the idea of me talking a little bit about my 25 favorite photos from the #MaximumAttack book. Hopefully this will give you guys some inspiration to go out there and do some Speedhunting of your own.

I just love the darkness; it forces you to play with the existing light. What you are actually seeing is two cars here: an Audi R8 that is about to crest the hill and some other car, probably a McLaren, with one broken tail light. This picture is what photography is all about: why you ask? I’m sure you guys have been hearing rumors that photography will soon be replaced by video, because you can always pull still photographs from video. Really? I’d like to see a video camera do a five hour exposure. This photograph required a not-quite-as-long two second exposure, but you get my point. For night photography keep a tripod and remote cable release handy.

Shooting into the sun is so wrong, but it’s so good. Perfecting a backlit image is something that I will be chasing for the rest of my life. Look for interesting shadows in your subject. It also helps if there is smoke, water, dirt or anything you can shoot through. In order to get natural vignetting, shoot wide open, although it does require shooting at extremely high shutter speeds.

Use your legs and body to compose your image, don’t use your zoom. In other words move around as much as you can. Find interesting angles. Push your limits and push the limits to where you can go. Remember, there is no  zoom. Don’t be afraid to get dirty. If you’re afraid of heights, take up knitting. I climbed a 50-meter-high scaffolding for this shot.

Sometimes a different vantage point sets YOU the Speedhunter apart from every other ding dong out there with a camera. It’s not special any more to have the most expensive gear. Besides, one can only carry so much. The best camera is the one that you have with you.

Cars get repetitive, so why not shoot some of the battle-hardened warriors that are behind the wheel? After all, the people are the ones who make car culture interesting. Mad Mike was definitely not going for a Sunday drive, he was strapping in for some carnage.

Background is key: the photos you shoot while Speedhunting should be technically sound even if you were to remove the cars. Mind the horizon and mind your composition. Sometimes it’s better to concentrate on what the background should look like rather than focusing on shooting the cars.

Manual focus every once in a while. It’s not always fun if your photos of cars are in focus. Mix it up and sometimes you’ll be surprised with the results. These kind of shots require very high shutter speeds, hence the frozen individual droplets of water.

Sometimes you HAVE to manually focus in order to catch your action shot. These rally cars were basically appearing out of nowhere; the only thing you can do is set a focus point of where you think they might be and fire away when you get the inkling that they will be coming around the bend. There’s just something special about being able to see the underside of a car.

Shoot as much as you can, and when you think you’ve shot enough, shoot a few more. Just be glad that you don’t have to shoot with a film camera any more. I don’t care who you are or what kind of reflex you have. There’s no way you will catch decisive moments without shooting excessively.

At the end of the day you’re only posting your best photos. There’s no point in showing people your outtakes. Plus how else would you get cool sequence shots like the one of Fredric Aasbø doing a gangster backwards entry and pulling out of it with ease?

Practise your panning. This is another one of those things that I will never be able to perfect, but practice definitely helps. Go outside and pan something: pan cars driving by, pan your grandpa with his walking stick at 1/4 of a second so it looks like he’s going at warp speed.

Beware that panning at different focal lengths produce significantly different results. At this point of the track the top fuel dragsters are already going over 100mph. Although the shutter speed was about the same as the Mclaren MP4-12C.

Use a high shutter speed to your advantage. It’s not cool if all your shots are pans either.

Force yourself to freeze the action: after all the light is there, you should try and use it to your advantage.

Can’t find anything to shoot? Go to ANY local motoring event and buy a ticket. Circle track, drag racing, autocross, you name it, you find it and shoot it, to death. Even if there was nothing going on I would call my friends and see if they were meeting up in a parking garage or if they were testing their cars somewhere. That’s how I got one of my favorite shots of Matt Powers very early on in his drift career.

Don’t be afraid to underexpose your photos. Force your audience to draw their eyes to the details. Use the digital camera’s lack of dynamic range to your advantage.

Learn to overexpose. A picture is worth a thousand words so use your camera to tell a whole damn story.

Don’t be afraid to experiment. It costs you nothing to format a card, but you can only gain knowledge from trying new things. I first started to play with remote flashes inside of cars. It made for some interesting photographs.

I eventually moved on to remote cameras. Sometimes it’s the only answer to being able to photograph in an area that is otherwise dangerous.

What do you mean I can’t shoot from the hood of a race car? Of course I can hold on to the hood scoop!

Experiment with special lenses. Try using fisheyes, macros and tilt-shifts or any other kind of non-traditional lens. I was always against the distortion that the fish eye lenses produced, but after years of using them I always make sure I have one with me.

Catch a flash. It’s easier than you think. You don’t even have to time it right, just keep that shutter open. You can even just use the Bulb setting on your camera.

Learn experimental post processing techniques. It’s so easy to use photo editing software now, but you don’t even necessarily need a computer. Some of the newer cameras do sequence shots ‘on the fly’ in the camera.

Don’t be afraid of the elements. Use trash bags, use duct tape. Do whatever it takes to be able to shoot in the elements. You should be able to photograph in pretty much any condition; as long as you can see light with your eyes, you can take a picture of it. I was standing in ankle-deep water for these shots of Eau Rouge, but it was totally worth it.

At the end of the day it’s about how much time you spend and how much risk you take. If you are willing to risk your DSLR on the front of a fire breathing race car then more power to you. How important is it to you to hunt that speed? How seriously do you want to take your hobby? It’s entirely up to you. Just one more thing: make sure to have fun while you’re doing it. Any questions?

No Access, No Problem: Shooting Drift From Behind The Fence 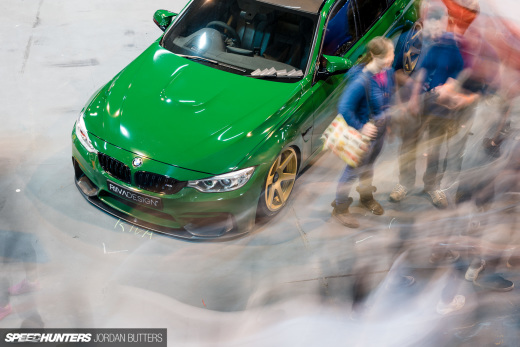 How To Take The Best Photos At Ultimate Dubs

The Beating Heart Of Godzilla