The best place to be at any Formula One race is the paddock, which is where the drivers are most of the time if they aren’t on the track fighting each other wheel to wheel. You never know when the drivers will appear so I spent a good amount of time in the paddock waiting for them. Join me as I take you around the Sepang International Circuit for some action both on and off the track at the Malaysian Grand Prix.

I arrived at the circuit on Wednesday and got to witness teams setting up their garages and making themselves comfortable in the paddock.

The atmosphere is relaxed as the crew went about preparing the cars and unpacking the containers with all their equipment.

Drivers don’t arrive at the track until Thursday, as they are tied up with appearances or sponsor events in the city.

I did make it to one press conference that was all the way at the Petronas Twin Towers, where the Mercedes GP drivers were.

Team principal Ross Brawn looked quite stressed as he emphasised how they really had to find the balance of the car in order to improve their pace.

There was a lot more hype in the paddock on Thursday as drivers started coming down to the track to do media interviews or their track walks. Ferrari’s Fernando Alonso came to the Brembo media educational meeting at the Ferrari hospitality for about 15 minutes, and talked about the importance of brakes before being whisked off to another engagement.

When they are not in their racing suits, the drivers don’t look any different from the ordinary man in the street.

Decked out in slippers, berms and a backpack, I wouldn’t be surprised if they walk past non-F1 fans unnoticed. Still, they are celebrities in their own right and are unfazed by the number of cameras being stuck in their faces for photos.

Jenson Button of McLaren walked about quite a bit between the hospitality suite, pit garage and the toilet. Just before the third practice on Saturday, he went to the toilet just before it started and had to run to the pit.

Going out on track to catch the cars, Kimi Raikkonen of Lotus was the second fastest in first practice and quickest of anyone in the second Friday session, but it was Sebastian Vettel of Red Bull Racing who topped the sheets on Saturday.

Rain fell during the last part of qualifying and it was Vettel who managed to grab pole position in a dramatic finish to the session, snatching it away from Alonso in the final moments.

Other than the drivers, I was keeping my eyes peeled for their girlfriends, such as the sassy PussycatDoll Nicole Scherzinger and the ever-so-sweet Jessica Michibata. There was much love between Hamilton and his girl Nicole as they walked hand-in-hand every day in and out of the circuit.

Jessica was more shy and she wore these long maxi dresses all three days of the weekend, leaving much for the imagination.

On Sunday afternoon before the race, there was an autograph session for the fans as the different teams took turns to arrive at the F1 village area.

Some fans arrived as early as three hours before the session, hoping for a chance to get up close to their favourite drivers.

The sport needs fans to grow and it was really interesting to see the extent that fans go to in support of their idols.

They went wild when the drivers arrived, screaming out the drivers’ names and shouting for their attention.

It didn’t matter if the fans were wearing T-shirts of another team – the drivers signed autographs for them all the same.

A defining characteristic of Sepang is the intense heat that leaves you perspiring in the strangest of places. Drivers were drinking nonstop to keep themselves cool in this crazy heat.

One group of people that remain unchanged whatever the weather is the grid girls and their huge umbrellas.

Rain or shine, they keep their big smiles on.

To say the race was highly eventful would be an understatement. When I was out on track, I saw how Vettel was aggressively attacking his team-mate Webber, before finally overtaking him in the last part of the race.

I also saw the two Mercedes GP drivers, Hamilton and Nico Rosberg, fighting each other.

At one point, Button was battling with the front drivers with his underperforming McLaren and then he disappeared from the track. I later found out he retired from the race after a pit stop blunder and severe wheel vibration. His team-mate Sergio Perez didn’t quite have the same pace as Button and finish in ninth.

Rushing back from outside back to the pit lane to catch the finish, Vettel showed some triumph for his win but Webber was quick to get out of his car and get inside.

The tension on the podium was so apparent, with unhappiness and displeasure written all over Webber’s face.

When team orders get in the way of individual driver interest, the situation often becomes tricky and in this case Vettel’s actions of disobeying have caused much disapproval.

I stood outside the Red Bull Racing garage for almost two hours, waiting in vain for Vettel to come out, but I guess he had a lot of explaining to do to the team. There was also some controversy in the Mercedes GP team as Rosberg listened to team orders and kept position behind Hamilton, giving the latter the last step of the podium.

Teams start packing up even before the end of the race, and the paddock was soon a bustle of activity with all the forklifts and huge containers.

Being a stalker is definitely a tough job (and not something I do regularly) but someone has got to do it in order to bring you these behind-the-scene shots from the Formula One paddock! The rubber dust may have settled on the track of Sepang, but I can’t say the same for all the controversial issues that resulted from the Malaysian Grand Prix. 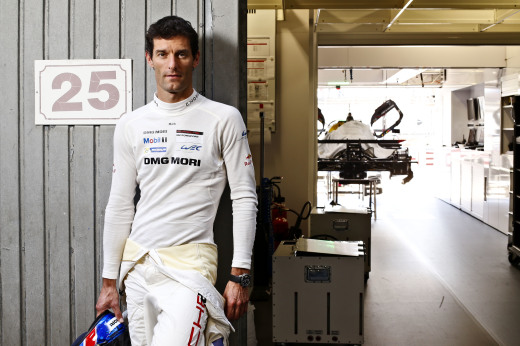 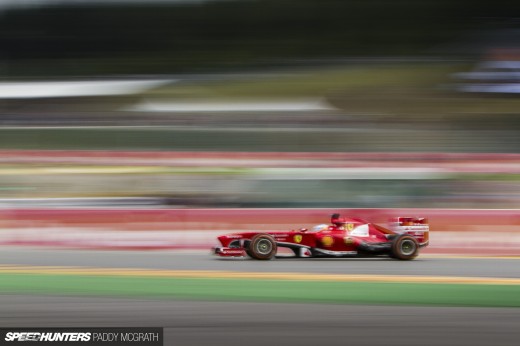 Poll: What Alonso Does Next 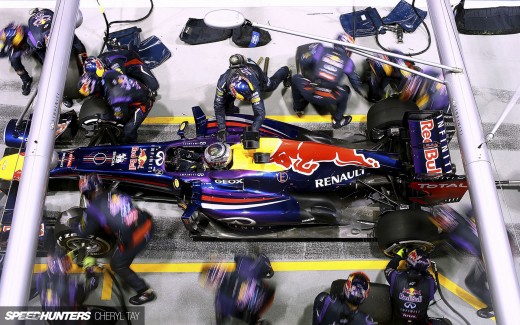