The first #FeatureThis reader ride spotlight of 2013 comes to us from Bryan Berkenkamp of San Antonio Texas. Bryan’s machine is a 2004 Lexus IS300 that happens to be of the rare SportCross wagon variety. Like its sedan counterpart, the IS300 wagon came equipped with a naturally aspirated 2JZ motor, making it a prime candidate for modification as Bryan has proven.

To give the wagon some extra muscle, he built up the original motor with 2JZGTE internals and added a Turbonetics billet 6462 ball bearing turbo, along with upgraded cams, injectors and fuel pump.

With boost set to 17psi, the car makes 470 horsepower and 430 foot pounds of torque to the rear wheels. Very solid numbers considering the car is Bryan’s daily driver.

From the factory, the IS SportCross was only offered with an automatic transmission, but Bryan swapped his autobox out for a rebuilt R154 from a MK3 Supra. As far as he knows, his is the only turbocharged, manual transmission-equipped IS wagon in the United States.

Elsewhere, the car has a host of suspension upgrades and set of 17×8.5 and 17×9.5 Work Emotion XD9s with Dunlop Direzza Z1 tires. The result is a very subtle and tasteful look.

Besides serving as his daily commuter and occasional autocross weapon, he’s also gone out for some long road trips in the wagon. So far he’s driven the car as far as Wyoming and California…

…where he took this picture of the car overlooking the Pacific.

After three years of building the car doing almost all of the work himself, Bryan says he’s pretty satisfied with where it’s at. The only future plans he has at the moment are to keep driving it, and we can’t disagree with that. Thanks for sharing!

Of course you can also join in by using the #FeatureThis hashtag on your favorite social media service and keep track of what’s happening in the #FeatureThis department by visiting http://featurethis.dev.speedhunters.com/ . 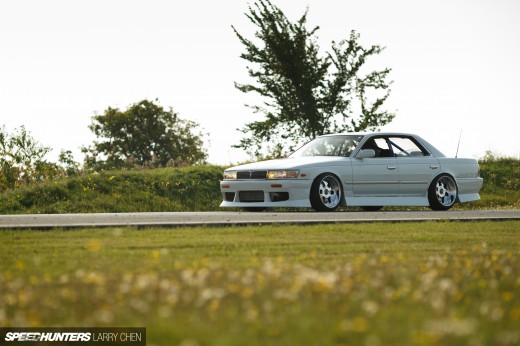 Awesome feature! Do the internals from the 2jz-gte swap straight into the 2jz?

@CurlytopNo, the crank has to be balanced, block honed, and the rod bearings have to be checked.

I love cars like this. Powerful enough to have a fun drive, Low enough to sit nice, but still all practical for daily use. Lots of love!

Such a bad ass, rare build. Couldn't ask for a better daily!

This car is the complete package to me. Super nice and there's something about the bike rack that makes the ride in my opinion.

I don't think I've ever seen more than 1 of these IS wagons. I love the automatic to manual swap!

altezza wagons are everywhere were i live

Howcome he didn't just swap in a 2JZ-GTE? Wouldnt that be a lot less labour intensive and easier? I'm not trying to be picky I'm just curious if there are any reasons behind it

@CrisCiunganu Some people dont for block strength. The GE block doesnt have oil squirters nor the passages for them. Also the extra cost incurred with getting another engine. Besides if youre going to have it all out already....might as well just rebuild what you have.

Awesome coverage! There are two IS300 Sport crosses that always show up at Formula D Atlanta every year in the paddock. Definitely worth checking those guys out, they are super mean and super clean too! If I find a photo of them I can upload it and show you guys.

If you want to see them that is.

<3 this, have always been a huge fan of IS's and this one is spot on!

<3 this, have always been a huge fan of IS's and this one is spot on!

To a sportcross owner to another

speed never goes out of style, love this IS XC.

how do i get a hold of Bryan, got a few questions to ask him, thinking of getting those numbers on my 2JZ-GE

Thanks for all the comments everyone. I'm way excited to have made it on speedhunters, and I'm glad other people appreciate the car.

Bruh ur cars dope as anythin its fresh u shuld deffinately put some vtec in it though. FRESH 4 LYFE

Hi, I came across this by looking for tires for my car,
I do have a 2004 IS300 Sportcross, when I bought it, it came with Brigedstone tires, then because of the cost I went into Firestone's, the mechanic told me the ones to get.
Well, I feel that the car rides like a truck, I have noises between 60 and 70mph, I want to know if that is because of the tires or not. What tires should I get for my car?
Will appreciate any info.
Ana