Magazine of the Year. Of all the Speedhunters Awards categories this one may be the toughest to sort out, and I think anyone who says print is dead should consider just how hard it was for us to narrow down the list of nominees in this category. To come up with the short list, the Speedhunters team took a simple vote on the magazines that we each read regularly and the ones we feel hold a big influence on the automotive scene. Since we all live in different parts of the world and have different tastes in cars, our responses were quite diverse with titles from Europe, the USA, and Japan all popping up. Unfortunately we weren’t able to include every magazine we enjoy reading (apologies in advance to all of our magazine industry friends!) , but we think the final list is a nice slice of the world’s automotive print media.

Here are the 15 nominees for 2012 Speedhunters Magazine of the Year.

The print version of everyone’ favorite automotive television show always delivers with the wit and quality we’ve come to expect from Top Gear.

When you finish reading an issue of the Rodder’s Journal, you proudly put it on your bookshelf rather than tossing it aside somewhere. It’s high production value and detailed look at hot rod and custom car world never fails to impress.

This is the magazine of choice for those who dig the technical aspects of motorsport and learning what makes race cars work. Function over form.

Nobody covers the fast moving Volkswagen world like Performance VW. If you are interested in the culture that surrounds the machines from the VW Audi Group, Performance VW is a must read.

Just as PVW does for the Volkswagen world, Performance BMW is at the top of the game when it comes to those wonderful Bavarian automobiles.

When it comes to coverage of the Japanese tuning scene, Option Magazine has long been the go-to source. Straight from the homeland, just as it should be.

Octane Magazine is great place to find high quality photography and in depth stories about both modern and vintage performance machinery.

New Zealand is known for it extremely rich car culture. and NZPC has long been the place to go to see it all.

For race fans, Motorsport Magazine is a long time favorite for its take on the diverse world of global automotive competition.

A newcomer to the magazine world, Japan’s Motorhead Magazine became a quick favorite of ours for its diverse focus on everything that’s cool about cars.

Hot Rod Magazine is another favorite of ours for its coverage of everything from factory performance cars to low buck backyard builds and everything in between. We also enjoy it’s open-minded take on things.

For fans of modified vintage cars and privateer machines from Japan, there is simply nothing better than G-Works.

“The Thrill of Driving” – a fine way to describe this high quality publication that features all of the world’s great performance machines.

Of the many magazines that focus on the modern automotive world, CAR is a favorite among the Speedhunters team.

Lastly we have Autosport Magazine, another must-read for anyone with an interest in the racing world. 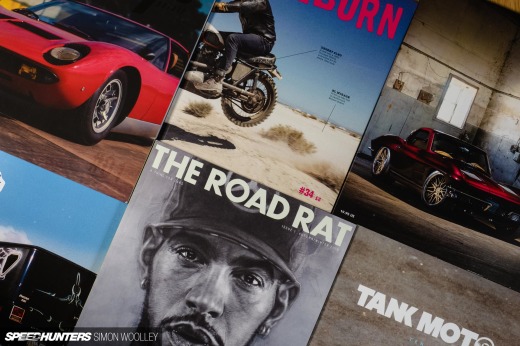 I was torn between Option and Motorhead.

I don't think there is one perfect magazine out there. Getting the right blend of cars, styles and technical info is hard enough. But then to add the graphic design, writers and photographers into the mix. I have found a couple of magazines that I can really get sink my teeth into the stories, but the graphic design has let it down and ones that have the best composed photos and a great technical information but the car blend has been too one sided.

I voted option, I only brought back 2magazines from my j-land trip, option and GT80s, so it was a rather easy decision

Hot Rod for me, i love Racecar engineering, but hate feeling like a complete moron after I read it

Voted for Racecar Engineering...never read one, but would LOVE TO!

Come on guys, where is D Sport love?

What a cluster these awards are this year. Where is D-Sport. WTF!  Or Racer which has some stunning design under new ownership. Modified would be another magazine.Oh and better include NZ Performance car, not that they are a sponsor.

Option for me, although I'd like also REVSpeed, Auto Sport, Racing On, Motor Fan and such.....

Correct, they aren't a sponsor. Your point being?

Clearly have not discovered Garage Life

EVO all the way, though I'm also a TopGear subscriber (which is a great mag). EVO's electronic editions (for iPad at least) are brilliant and a credit to a magazine that's doing its best to move with the times and be forward thinking.

Gonna have to go with NZPC solely because its always got entertaining parts.

Gonna have to go with NZPC solely because its always got entertaining parts and cause i like seeing kiwi car culture.

So people pick option and I am sure 90% of the people that voted can't read Japanese.

Sad when so many people pick magazines they can't even read, because they're cult, or because of their design or something... (Especially the Japanese mags.)As a magazine, in terms of editorial excellence, nothing here can touch Motor Sport. (Two words.)

Rodder's Journal deserves way more votes. I'm an import guy and it's easily one of my top favourite magazines of any type, period.

@BlackJacket Hehe... I know exactly how you feel! Maths hurts my poor head!

Pretty sure that 75% of those who vote for Option don't understand a single fucking word of japanese...
Octane for me.

Gonna have to go with NZPC solely cus i like seeing kiwi car culture and apart from option and g-works i haven't read any of the others on the list.

@DejanJovanovic
Now Option mag comes in english in our country, Direct translation, so yeah.. we r able to read the mag alr.

looks like the television and the internet have a lot to do with the voting. very sad

NZ Performance Car is possibly the worst THING in the world.

Gotta be NZ Performance Car. The scene is hardcore and the magazine captures it perfectly. Go the Kiwis

Damn straight, New Zealand Performance Car magazine all the way. The car scene in NZ is passionate and innovative. Hot Rods are for the old schoolers who don`t understand or appreciate progress.

Damn straight, New Zealand Performance Car magazine all the way. The car scene in NZ is passionate and innovative. Hot Rods are for the old schoolers who don`t understand or appreciate progress.

Or taken a look at the hot rod scene lately.  It's not just old men in lawn chairs my friend.

Mike's right, after you read a Rodder's Journal it goes on the bookshelf, not in the trash.  At $15 a pop it's more of a book than a mag.  Take a gander on eBay at values of issues 1-4 and I think you have your answer.

Like I said in the Builder of the Year comments, this just isn't the right crowd for that magazine to get the votes it deserves.

High Performance Imports from Australia! I'm lucky enough to have found them in one store here in Vancouver.

@ElanaScherr I like keeping you in a job Elana, thanks for the inspiration. I currently have 'Roadkill' seemingly on repeat as I work

Rodders Journal gets my vote. It really is a cool magazine AND I can buy it off the shelf over here in England!

You said it right! I've noticed that in the last few months there is more cars,articles to suit me than ever. This is the first time in my 60 yrs on this earth that I've been so impressed with an Mag. It's like someone on the staff did a Vulkin mind melt on me!

Maybe I'm biased but this is unfair. TRJ is not a magazine, it's a bible... it's a keeper... it's on a level of it's own... well, definitely not a magazine

But I do want to give props to MotorHead for what they are doing/covering.

But I do want to give props to MotorHead for what they are doing/covering.