My interest in cars and all that has spawned from them, be it motorsport, the tuning scene or car culture in general has always come from a basic fascination with the mechanical side of it all. The car and all its components, the engines especially, is what really does it for me. I also think of myself as a bit of a purist on many levels, especially so when it comes to modifying cars; so in theory I should pretty much hate drag racing. But I don’t, I really love the bloody sport. Seeing shops push well-known engines to their extremes is what it’s all about, it’s what the tuning industry should be based around because in the last decade or so it has all lost focus. Granted times are changing but away from the mainstream, it was extremely refreshing to see a bunch of car nuts up in Sendai Hi-land the other month run their drag cars on the strip, pushed by that need to always better their times.

I really felt in the right place, where despite doing things on a far wilder and more extreme level, everything is based around a car’s true performance not style or looks judged by ever-changing fashion. I think this is as pure as the JDM tuning scene gets and I loved every second of it, especially being able to see cars I had never even heard of like this Yashiro Engineering built SA22 RX-7…

…running a naturally aspirated 20B!

Rotaries have always been pretty popular in the Japanese drag racing scene and I did stumble on some cool entries like this Protect FC3S.

Here is the owner checking over the data from his last run.

If someone asked me what the most surprising car at the event was, well the answer wouldn’t be the Esprit 240SX, but rather this TOC Bodyworks Corolla wagon.

This full tubular frame car was built in collaboration with 0-4 Factory and is powered by a 450 HP, turbocharged and nitrous oxide injected 4AG. Crazy or what?

Ever wondered what it takes to make a non-pipe-frame RPS13 shoot down the quarter mile in 8.7 sec?

An engine bay like this of course. I love attention to detail and this 2.2L stroked SR20 had been given lots of it. It’s not every day you see RB26-sized turbos like this T04Z bolted on to 4-cylinder motors!

Being a practice and set up day everyone was extremely busy. There are lots of things that continuously need to be checked, adjusted and at times repaired.

As we saw yesterday the Sonic Boon JZX100 suffered a mechanical failure on its second run and shortly after destroying either the diff or transmission it was towed back to the pits.

With most teams bringing a lot of spare parts…

…the checks began immediately, first obviously ruling out any potential damage to the highly tuned 2JZ.

After close to a decade of seeing S-chassis built for drift and sometimes time attack, it was rather refreshing to see so many present in Hi-land, like this S13, a private entry capable of 8-second passes…

…as well as this JUN Silvia we saw doing a nice burnout in yesterday’s post.

But like you have probably gathered by now it’s the Skyline that really does it for me and while the wild pro cars are incredible in every way, bright paint schemes and all…

…even when packing N1-based 1000 HP engines. The ignition coils had been pulled on this T51R boosted beast for a quick spark plug check and maybe change.

The Garage Ito ER33 Type-M is probably one of the most recent builds in the JDDA and because of this hasn’t fully proven its potential quite yet. Still, it is well into the 9-seconds now…

Nothing to do with the actual drag event but there are always interesting cars parked in the paddock like this JZS161 Aristo running on purple anodized wheels!

I was impressed to see the Garage Rise Up RPS13 earlier in the day nail a few perfect launches, shooting down the strip like a bullet. Obviously a lot of that is down to the driver…

…but I was curious to see what it was running under the hood too.

I really do hope I will get a chance to cover more JDDA events next year. This day at Hi-land was quite the eye opener, first of all to see that the Japanese drag scene, albeit small, is still very much active with plenty of awesome cars participating. So despite what the mainstream wants us to believe, drag racing is far from dead in Japan, and I take my hat off to all the enthusiasts and shops that despite the obvious difficulties continue to pursue their passion…a quarter mile at a time.

The Fastest Corvette In Japan 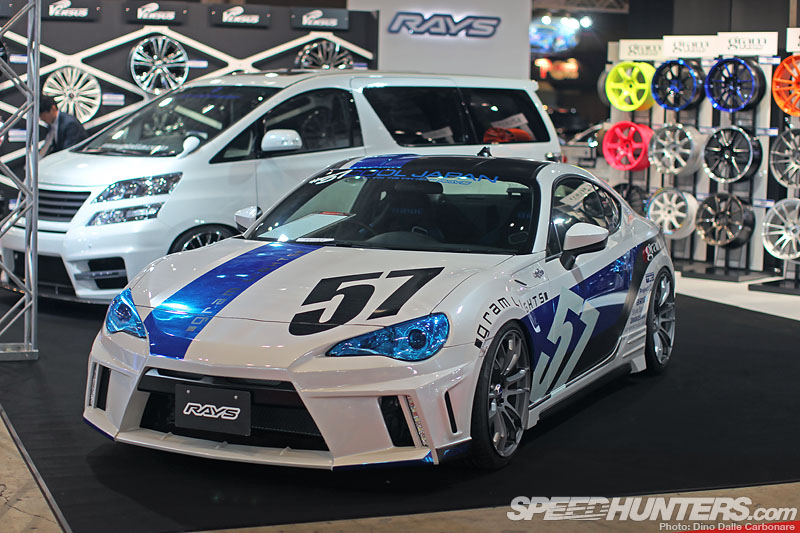 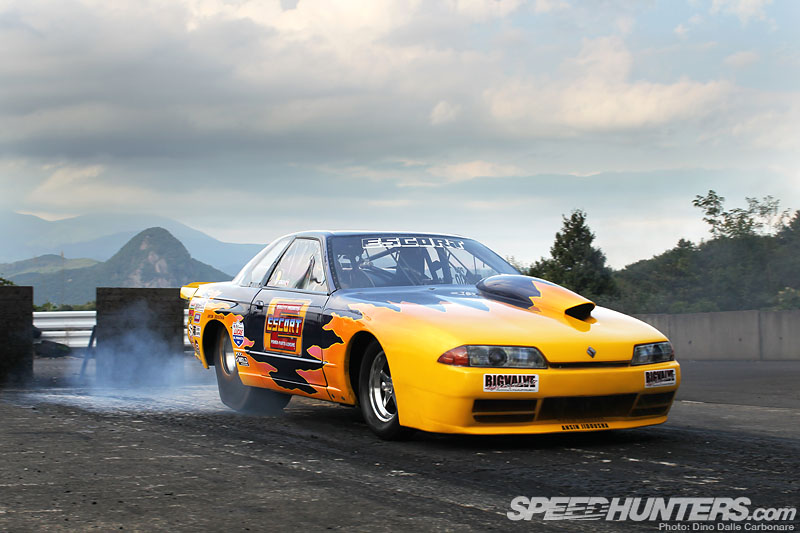 One thing that I find odd is that they're still sticking to the old "d" head on the sr20s, I would have thought that they would be using the newer "v" head off of the jap xtrail, there are huge gains to be made on an sr with it, theres some big power 20vet silvias over here running low 9s that are on street radials, and registered

@777 My guess would be that the heads have had the shit flowed out of them and huge cams put in, since they are not to corncerned about low end and mid range I would guess it defeats the point of a ve head. I know ve heads flow better but after the amount of porting those de
Have had there probably isn't a lot to be gained from the swap. That my opinion/guess
It's very refreshing to see something which isn't corncerned with fitment thanks for the great post.

@st3althr possibly, though the ports on the ve head are much, much bigger from factory and they are at a better angle into the cylinder also, and I think the chamber design is better as well, i'll find some comparison shots later but ve heafs flow a serious amount of air, I think a heavily ported de head is only just getting to the levels the ve is at from stock, they're rather increadible and have pushed sr's into a new realm

Not a usual fan of drag but this article is amazing! Great cars, never seen anything like this. Makes me want an old rx7

@st3althr had to dig around, but here's an ok comparison pic, i know i've seen a better one but for the life of me just cant find it~ http://www.nissansilvia.com/forums/index.php?app=core&module=attach&section=attach&attach_rel_module=post&attach_id=228114 , similar height, wider, and with just as much meat to cut into, and that's just the intake, they really have quite huge ports, and the valvetrain is better, some are pushing 12k in drag spec, some are at 10k for drifting too

@777  @st3althr Definitely agree, that's my S13 that you were referring to, VE's definitely make power easier and are more reliable, but a DET and VE will get to a power level where it's up to the tuner as to whether it lives or not. As far as I know some of them are running gas too. We're very lucky to have E85 on the pump and a good track. Top shots Dino, absolutely unreal wish I was there!
PJ

Dino, do you have any further info on the times that the silver & red 180SX and that black S13 with the monster tyre on it?

@James B yes please. its not everyday you hear about a 4AG drag car!

Lovin that wagon, feature please.
And are they running 1/4 mile in Japan as well?

@Ryanfels
http://www.0-4factory.com/
Check their main page there is an animated gif of that corolla wagon

@pdrift Legend! Thanks. If you did into the website, you can find the build thread of it

@Ryanfels  @pdrift Yeah apparently it was hard to get the shell off for only a pic haha.  Pretty crazy car

@KietaPhillips It's a Japan car so yes

@Downcut No as it was only a practice day and I head the following day it rained to no times were recorded by the JDDA. But both cars are in the 8-sec

@daveylad See what I mean, it really does it for most people, even those that are usually into drag

@pdrift  @James B I'll start hunting for it then...

@Downcut  @777  @st3althr I have yet to see VE heads used on any drag car over here.  Usually it's always in the time attack scene that you see them. Hard to say why, maybe because most builds are old, maybe it's a cost thing

@speedhunters_dino @James B
Oh man, I hope you find it! Thanks Dino!

A whole artical and pics on BNR32 drag cars at this meet would be alltime!!

Please do a spotlight on that corolla wagon,  engine info would be killer too!

Any FFs at the event?

@speedhunters_dino You've mentioned that there was only two (2) tracks used for zero-yon, so what's the "other" track then?

@apex_DNA  @speedhunters_dino Well it's not really a track per se, but they use the straight at Central Circuit.  Actually a ton of drag events are held there throughout the year.  Too bad it's a 600 km drive from Tokyo!

@speedhunters_dino Maybe that's something you wanna feature when in that area, hopefully we'll see FF drag racers too...

I recently went to a drag event for the 1st time and now I have a whole new perspective about these events.

@Gvk So are hot rod events. Went to Street Rod Nationals in Sacramento, CA...that was an eye-opener.

Looks like a lot of sick fun. Nice cars and racing!

Nice cars and racing! Looks like a lot of fun