Ever since I returned home from the California Hot Rod Reunion on Sunday evening, I’ve been experiencing strange sensations. As I crawled into bed on Sunday, tired and maybe smelling a bit like nitro, I closed my eyes my mind was filled with the sights and sounds of drag racing – screaming engines, burnouts, wheel stands, and parachutes. This is actually a pretty common thing for me, where if I spend an entire day doing something my mind continues replaying it until I fall asleep. A strange mix of exhaustion and excitement I guess? Of course given my line of work, 99% of these visions are related to cars in some way.

There’s just something about retro drag racing that amplifies these visions even more than usual. It doesn’t help that your ears are still ringing for quite a while afterwards. If you’ve ever been to one of these events you’ll know what I’m talking about. I spent some time in yesterday’s post trying to project what it’s like to experience the Hot Rod Reunion, and now I want to try my hand at projecting the excitement of the cars at these events.

Perhaps more so than others, nostalgia drag racing a motorsport where the cars are truly king. This isn’t to take anything away from the skill and courage of men and women who pilot these things, but for many it’s the bold, experimental nature of the race cars themselves that defined drag racing in the ’50s, ’60s, and ’70s. In the good old days, the greats like Big Daddy Garlits and TV Tommy Ivo were known for their wild, personalized machines just as much as their driving talent.

In contrast to today’s world of cookie cutter race machines, this was a time when the cars had character. Each machine seemed to have its own identity, whether it came in the form of an off the wall dragster or a production-based machine that didn’t look all too different from the one your mom drove to the grocery store.

The “Black Jack” Gas Dragster is a car that perfectly embodies the spirit of  the sport’s glory days. The car was originally built and raced in 1971, taking an NHRA gas record before being retired and restored to its current state in 2004.

The car is powered by a pair of blown 464 cubic inch Chrysler Hemis making about 1,000 horsepower each. Today seeing a competitive race car with more than one engine is unheard of, but in the ’60s and ’70s no idea was too crazy to try.

It would be impossible to pay tribute to the machines of the California Hot Rod Reunion without touching on the Nostalgia Funny Car movement. But before moving to the nitro-spitting floppers I’d say a quick trip through Funny Car history is in order.

The roots of the Funny Car can very much be found in machines like this altered wheel base, Hemi-powered ’64 Plymouth known as “Outer Limits”.

In the early ’60s drag racers came up the idea of pushing the rear axle and front wheels forward, shifting weight and increasing traction to the rear wheels during launch. The trick caught on, and soon these altered wheel base machines were popping up at events across the country.

Compared to the standard wheel base versions, the cars looked strange. At some point they were dubbed “Funny Cars” and even though the machines have changed drastically since then, the name has stuck.

Next in the evolution came one-piece fiberglass bodies that replaced steel and aluminum panels in the name of weight savings. They were moving from modified production cars to dedicated race machines that retained the look of vehicles found on the showroom floor.

The bodies were hinged at the rear for easy and quick access to the drivetrain, resulting in the iconic flip-top Funny Car look. As the years went on, Funny Cars continued to evolve. They were going faster and faster, but at the same time looking less and less like “real” cars.

By the 1980s, most fans agreed that the Funny Car had lost its way. The unique cars had been replaced by a group of wind tunnel-derived machines that looked identical to each other and nothing like a car you’d find on the street.

The idea of the booming Nostalgia Funny Car movement is to capture the feel of the Funny Car’s glory days of the 1970s, but with all the competitiveness of modern pro drag racing. It seems to be working because the field at each Hot Rod Reunion is getting larger and larger.

It may be called “Nostalgia” Funny Car, but with the funds and desire it’s very much possible to build one of these machines from scratch using new parts. Race engines (most based on the classic Hemi), complete chassis, and retro-styled bodies can all be sourced from specialty race shops across the country.

Since the guts of the cars are covered by bodywork, they can be outfitted with modern safety equipment without altering the nostalgic look.

But even with proper protection, they are still pretty frightening. The drivers still sit almost on top of the engine and the controls are as basic as you’ll find in any motorsport. It takes some serious courage to climb in one of these things and then hit 250 MPH in less than six seconds.

One of the things I love most about drag racing in the ’60s and ’70s is that there was always a sense of “going for style points”. Running down the dragstrip as quickly as possible was the primary goal yes, but many cars were built with equal focus on showmanship and getting the crowd to go crazy.

Take the “Holy Toledo” Jeep Funny Car for example. Even if its aerodynamics left something to be desired, it’s unique shape was something that fans would always remember.

There were actually two iterations of “Holy Toledo” present at the Hot Rod Reunion. One was an authentic recreation of the original machine as it looked in its heyday, and the other was a contemporary Nostalgia Funny Car with upgraded safety equipment and powerplant, but the same distinct look.

As you wander the pits and static display areas at the Hot Rod Reunion, you find that so many of these cars have rich histories behind them. I personally find this to be just as interesting as watching the cars fighting it out on track.

This Hemi-powered ’33 Willys was a fighter in the California Gasser wars of the ’60s, with the long vanished Fremont Dragstrip in the Bay Area serving as its home track. 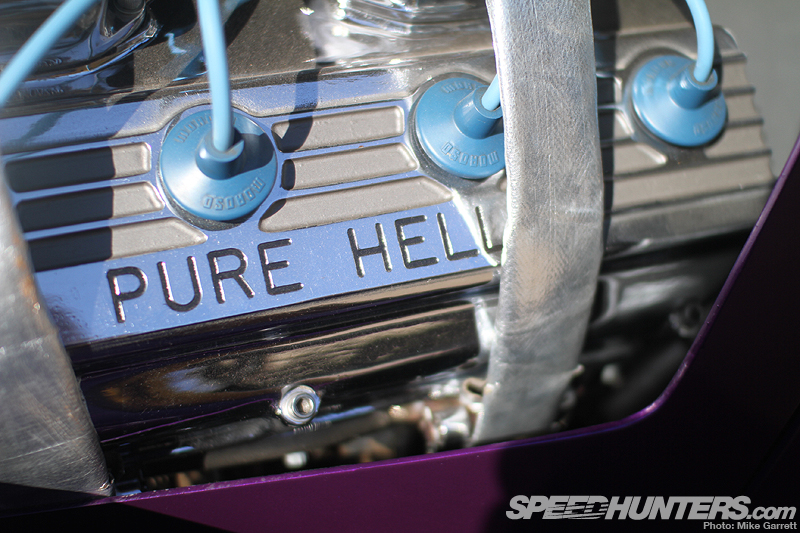 Over the decades it’s been powered by a variety of engines, retired and un-retired, , and totaled at the track. You could spend hours just talking to people and hearing the great stories behind these cars.

This Gas Dragster known as “The Scrambler” was based in Arizona and campaigned in the early 1960s before being put away in storage for over four decades.

Unlike most cars at the Reunion which are powered by V8s of some sort, The Scrambler gets its power from a 302 cubic inch GMC inline six. The motor got the job done though, moving the car to a best ET of 9.5 seconds at 154 miles per hour.

Here’s a Pro Stock Ford Maverick campaigned by the late Dyno Don Nicholson – another drag racing legend. Seeing this car got me thinking about how cool it’d be to see vintage Pro Stock racers included at events like the Hot Rod Reunion.

This Cuda running in the A/Gas may be running modern type racing wheels and hood scoop, but the graphics are a nice throwback to the ’70s.

Found in the swap meet was this Devon sports car body sitting on a narrowed and shortened ’56 Chevy chassis. The hybrid machine appeared at the drag strips all over Southern California before its career ended in 1980.

It’s powered by one of Chevy’s legendary 409s with original dual four barrel carbs. Quite a valuable piece!

What’s especially cool about this time capsule is that it’s always been titled and street registered. Check the original California black license plates.

There’s never a bad time for a high-riding straight axle Gasser, like this example built out of a ’65 Pontiac.

Of course not all of the notable vehicles at the Hot Rod Reunion were of the competition variety. I was digging this chopped Ford Econoline hanging out in the car show area near the timing lights.

This Edsel Wagon being offered for the reasonable sum of $2,500 is pure project car temptation. Lowdown custom? Push car? Throw in a crazy motor and build a Gasser? There are so many possibilities.

Until we have time machines, this event is the closest people like me can get to experiencing the glory days of drag racing as they were.

Whether it’s the cars, the stories, the style, or the speed – the California Hot Reunion is Joy of Machine plain and simple.

A couple things: Outer Limits and A Lil Nasty are awesome, just plain awesome. And the Devon and GTO in the swap meet, two cars I'd buy in a second.

Edsel=WANT. Also 'Cuda'lution', that is an awesome looking machine. Loving this coverage.

Love The Scrambler. Looks like a real honest dragster. Great that they went with a straight 6.

Mike, I think you may have been misinformed about the altered wheel base cars evolving into funny cars. I actually have some photographs that I took at Laguna Seca during the Rolex Mtorsports Reunion of one of the actual first "funny cars." It was part of a display of about a dozen or so nostalgic dragsters. If you'd like I can email them to you, the car is pretty cool and is very easy to see how they quickly evolved into what you have posted here and current.

x2 on the GTO wallpaper. Any more info on that car?

I wish I could have seen it run, but it was already loaded up when I got to the track,

@MPower_junkie Yeah the early flip-top Funny Cars looked quite a bit different than the crazy nitro-burners that compete at the CHRR, but the name "Funny Car" itself began with peculiar looking altered wheel base production cars.

@Mighty_Mite50 Thanks, I'm glad you enjoyed it!

Dyno Don Nicholson... Man, does that name ever take me back! "Legend" is a word that gets tossed around a lot, but he earned it in the sport of drag racing. I even had a 1/25-scale model kit of his Mustang II as a kid. Got the 1/18-scale die-cast of his '68 Mustang on my shelf right now. Last I heard, the real car is still in the hands of a local collector here in the Nashville area. How cool would it be to have all of Dyno Don's cars reunited at an event? They could fill a run group by themselves!

Back when drag racing was cool... really cool!

Well this time i think you've really found the perfect roadster! (I'm on about the silver/grey deuce in the second to last photo, of course.) Thanks.

@MPower_junkie the evolution of Altered Wheelbase AFX cars into Flop-Top tube chassis Funny cars is pretty well documented. I have several books on the matter and it's just as Mike wrote here...