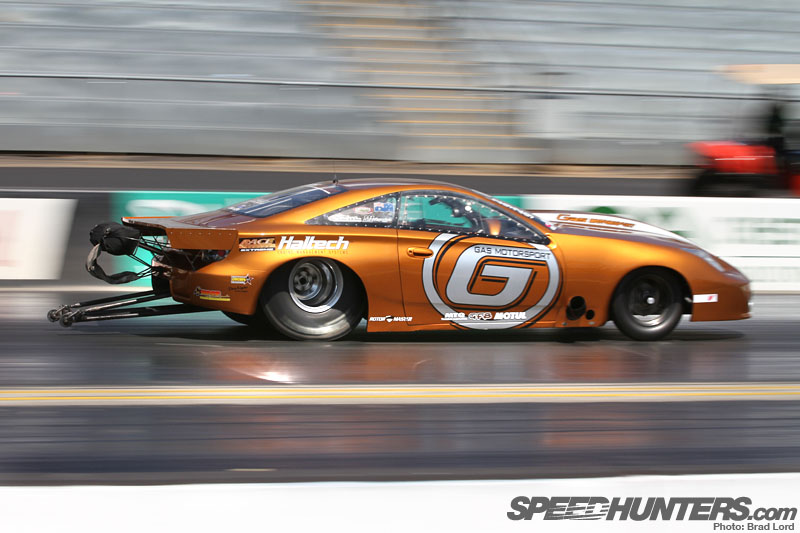 While the popularity of sport compact drag racing has appeared to have lost its shine in other parts of the world, it was more than clear looking around the pits at the 2012 Brisbane Jamboree (aka J22). The Australian scene is bucking the trend.

The Land Down Under has enjoyed a strong sport compact drag racing community ever since the community was first formed. But as time has gone on, and the quest for greater performance has increased, so too has the quality of builds. 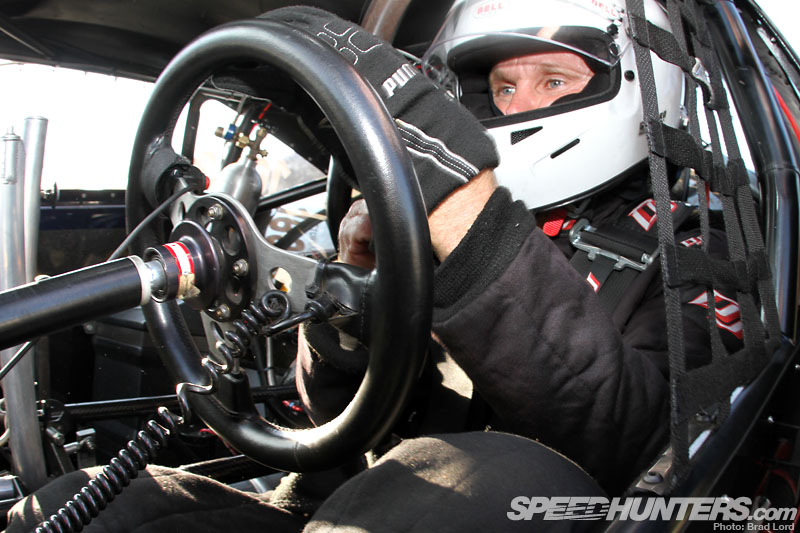 For many of the top-ranked competitors – Rod Harvey’s Rayglass Boats-backed team from New Zealand included – lost interest in sport compact racing stateside has spelt opportunity for drivers looking to step up into a proven chassis at much less cost than building a new car from scratch.

With so many local sport compact racers stepping up into similar packages, it made sense that a new class be developed for these late-model, high-tech turbocharged machines. Brand spanking new for 2012, Factory Xtreme – or FX for short – is the result.

Although FX cars are far from simple, the concept behind the Australian National Drag Racing  Association (ANDRA) backed series absolutely is. This is ‘heads-up’ racing for any post-2000 full chassis vehicle with a maximum wheelbase of 115 inches (2921mm) and that is motivated by either a four-cylinder, six-cylinder, twin-rotor or triple-rotor engine. Weight breaks and equipment concessions even out the odds.

Fourteen cars signed up earlier in 2012 and J22 was the last of four rounds contested this year at various meetings, including Sydney’s Jamboree held in late March. But For some teams like PAC Performance, the last weekend’s Brisbane event was their first time racing in the class specially developed for ultimate sport compacts. In PAC’s case that “ultimate” is brand new Mazda 6 SP built around a RJ Race Cars (USA) chassis and featuring a 20B engine with a Garrett GT55 strapped on the side.

As you can see from George Rehayem’s office outlook, machines like the PAC Mazda 6 are built for serious speed and safety, with a strong chrome-moly chassis and acres of lightweight composite moldings. J22 was the first time the Rehayem’s were back on track after George’s brother Rocky’s huge 175mph+ accident at the 2011 Nitro Champs. Stepping up to this stateof-the-art chassis is allowing the PAC brothers the chance to realize their dream of reclaiming the world’s rotary sport compact title.

At J22 there were a total of 11 starters of varied chassis, engine and body design. From cars like Scott Porter’s sinister looking 6.46-second G35 Nissan/Infiniti…

…built on a Vanishing Point chassis and powered by a wild, twin turbocharged Nissan VQ35 V6.

…and running a Jett-built Mitsubishi 4G63. Just a couple of weeks ago the impressive package helped Collin achieve the long-time goal of taking the first four-cylinder powered vehicle into the sixes. He did it on a 6.98 @ 197mph (317kph) pass.

Of course, within the Factory Xtreme ranks there are no shortage of Toyota 2JZ-powered weaponry, including Malcolm Glassett’s Hurricane Racing Toyota Solara…

And let’s not forget the ground-breaking GAS Motorsport Celica.

If you caught our first coverage of J22 you would have read that Joe Signorelli pointed the ex-Titan Motorsports machine to new heights of sport compact performance with a competition shattering 6.30 @ 227mph (365kph), followed up by an even quicker and faster 6.26 @ 230mph (370kph). It was a moment I won’t forget in a hurry, that’s for sure.

To see so many of these cars in one place at one time was pretty cool. Even though it might not look like it here, experienced racer Craig Dyson had a few problems with the Top-RPM Motorsport Celica (another ex-Titan car) during the course of the weekend.

But there’s just as much potential in this car as there is in the GAS machine. The hard part is getting everything to gel together on the day.

That’s easier said than done when small changes– like slight clutch adjustments – are just one small piece of a very big puzzle.

Mark Jacobson used to be found behind the wheel of R32 Nissan Skyline GT-R built to challenge Heat Treatments Racing’s 4WD record. That project might have fallen by the wayside, but I doubt Mark’s too concerned given the success he’s having with Godzilla Motorsport’s recently unwrapped full tube R35. There’s no Nissan VQ set-up under the front clip, but rather a monster 3.2L Nissan RB derivative.

Another force to be reckoned with when it’s full dialed in his Archie Kajewski’s new-look Mazfix Racing Mazda 6. Like the PAC Mazda 6, there’s a triple-rotor 20B turbo engine beneath its skin.

With such an impressive line-up of Factory Xtreme cars racing at J22 (and more cars on the way) it’s safe to say that sport compact drag racing’s future – at least locally in Australia – is looking very bright indeed. How many sleeps until J23?

I’m going to wrap this post up with two cars that left an impression in the Pro Compact ranks, a category that currently allows Pro Stock-type, full-tube frame cars using four-cylinder or twin-rotor engines and up to two power adders, i.e turbocharger and nitrous. First up was the class winner at J22, Ben Bray, who debuted his Nissan Altima in style, driving it to a 7.10 @ 196mph (315kph).

As the son of Australian V8 Doorslammer legend, Victor Bray, Ben has racing in his blood. Now he’s got new car built around a Ness Racecraft tube chassis.

The engine set up is based around a fully built billet SR20 block that breathes through a large Garrett turbocharger and gets its firing orders from a MoTeC ECU.

Already of the verge of breaking into the sixes after just one meeting, I’m really looking forward to seeing how Bray Jr progresses through the ranks with this world-class package.

Speaking of SR20s, Michael Baghdadi’s Micks’ Motorsport Nissan 200SX (Silvia) certainly did the business at J22 when it set a new ET world record for the popular four-cylinder performance engine.

It was only a few weeks ago that Puerto Rican team Kako Racing became the first into the sixes with an SR20 motor running 6.916 in their Datsun 1200 coupe. Michael’s 6.914 @ 197mph (317kph) ET eclipses Kako’s ET by just two hundredths of a second, although the Puerto Rican’s still retain the trap speed title having hit 200mph on a 6.95 ET pass.

Finally, I’d be doing a real injustice if I didn’t make mention of Chris Tait’s 7-second Nissan 200SX, which recently won the Australian National Drag Racing Association’s (ANDRA’s) Best Engineered Vehicle Award at the Fuchs Winternationals. In the company of other seriously impressive Australian builds, it’s  big news that a sport compact took out that prize. But having seen the stunning Toyota 3RZ-powered machine doing what’s been built to do in the raw, it’s not hard to see why. Kudos to Good Times Racing!

Stay tuned, more J22 action is just around the corner.. 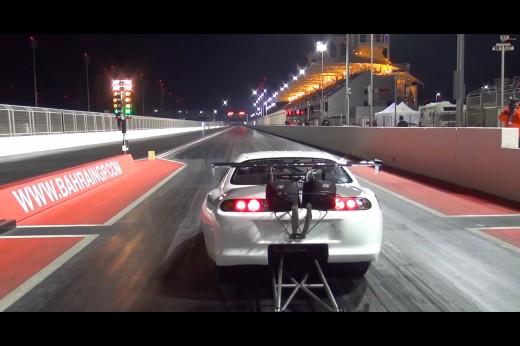 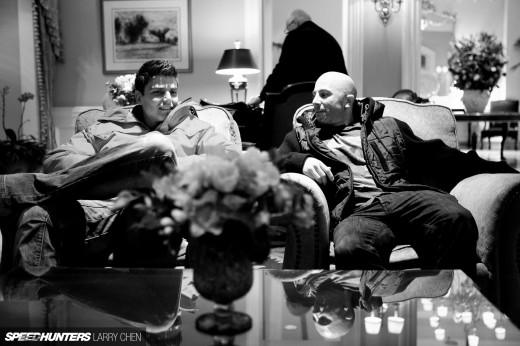 wow, those are some unusual/diverse cars.

Great shots, greater cars - but this article is lacking one very crucial factor: horsepower numbers! The ETs speak for themselves, but c'mon...

If there ever was a drag machine that I'd like to see again at the track it would have to be Abel Ibarra's 20B-powered RX-7. There's no doubt in my mind that the Australians would've pushed it even further than Abel did. Great to see the Oz sport compact scene flourishing.

This article brings back so many memories - back in the day (that was 10 years ago!) I only had a 56k modem that I could use very sparingly not to anger my parents with phone bills. In those pre-Internet days, every month I had to wait for new magazines from across the Atlantic to be imported by my favourite shop. I can still remember the excitement of picking up a fresh issue of Import Tuner or Sport Compact Car... I now look at some of the featured cars and think "Man, what was I thinking, this is disgusting!", but to a car-loving teen with a cratered face these mags were the equivalent of a message from the Gods. Or a stash of adult magazines with very scantily clad ladies, take your pick.

Nowadays we take for granted that reports of events on the other side of the globe will show up on our computer screens in a matter of hours, or even minutes AND completely free of charge. How a single decade can change human perception... Apologies for being sentimental, it must be the beer. Thanks for doing what you do Speedhunters, keep it up.

is there turbo lag cause those are big turbocharger

@brined
I think that in many cases cars of this level are just too powerful to be measured accurately on the Dyno.  I would have thought the FX cars would be somewhere around 1500-2000HP mark but don't quote me on that.

@paulvang96 technically there would be massive lag, but these cars are brought onto boost while staging, and generally don't come off of boost  until the run is over so it really doesn't affect them at all

I have a massive amount of respect for the 4cyl and rotary powered cars that are into the 6's! It's almost to be expected that a 2J powered car like these SHOULD be in the 6's but SR's and 4G's are the ones that I like to see succeeding in dipping below the 7sec mark!!!!!

@RobIsKoolas  @brined
I think the Gas Motorsport car is capable of around 2500hp (2jz)... Looking at the ET's, id say thats about what they would run at...

I tell you guys, there is nothing like seeing any one of these cars run... The burnout, then the stall up at staging (Insane), metre long flames shooting out the side exhaust, to the actual launch, its bloody unbelievable...

@Spaghetti
Anything is doable, you run enough air and fuel into any engine, the skies the limit!!!

That nissan altima in not an altima, its a pontiac grand am. its an ex us pro stock car.