We have featured some pretty unconventional builds done by Speedhunters readers, but this one has got to be one of the craziest we’ve seen yet. Submitted by Tyler and Stephen Gibson of St. Joseph, Missouri this 1947 Chevy Truck has been rebuilt from an abandoned carcass into one of the most unique low budget autocross vehicles ever.

This what the truck looked like when the father/son duo began the project. Most would take a look at this thing and leave it to rot, but Tyler and Stephen had some crazy ideas swirling their heads. They began by taking the chassis from a 1984 S-10 minitruck and shortening the wheelbase to 101″ and boxing the frame rails before dropping the ’47 body on it.

The body received plenty of custom work as well. The cab itself was narrowed nine inches and chopped by three and a half. The big fenders you see in this photo are a recent addition. Over the course of the build, the entire chassis and suspension was redone with both custom-fabricated and aftermarket parts in the front and rear. Highlights include RideTech triple adjustable coilovers and a rear suspension that is almost completely fabricated from scratch.

The truck is powered by home-built small block Chevy V8 with aluminum heads, a roller cam, an aluminum intake and large diameter headers from a circle track car. Running on 91 octane fuel, the motor makes 390 horsepower and 371 foot pounds to the rear wheels.

Tyler calls the interior “sparse” with a mismatched pair of Kirkey and RCI racing seats, four-point harnesses and a variety of Sunpro and Equus gauges. It all seems to get the job done.

With a total weight of just under 2,400 lbs and nearly 400 horsepower to the wheels, you have a recipe for big thrills on the track in what I’m sure is the most unusual looking vehicle at every event it goes to.

Thanks for sharing guys!

This thing is all kinds of wrong... I LOVE IT! Is it bad that I preferred it without the over fenders?

Not a particularly competitive or quick car for XP class, especially considering that there are 130 HP, four cylinder, non-turbo, front-wheel-drive (non-Honda) cars in XP class that are running nearly identical Index Challenge numbers in other Cen-Div SCCA regions (like on the other side of the same state).
But it looks like he is having fun, which is the important part.

does he wants to sell it??? i would love to have this car

@Robo_No1 I'm with you on that one. Gave it more a rat rod like look.

Thanks for the feature!

I run in XP at SCCA events for fun, but it doesn't really even fit those rules. I originally built the truck for Goodguys Autocross. It was cheap to build and is a blast to drive.

@AlbedioNevesFelicio I couldn't bring myself to ever sell it after all of the work I have put into it!

This is great, I like the rat-rod origin of it as they kept the original condition of this thing in tact. Don't ever paint this, it's great with that history showing.

@Robo_No1 Exactly, it's an awesome vehicle regardless.

What SCCA events do you go to? I live in KC and would like to see this beast, also I've done SCCA once.

I have run a handful of events out at the Blue River Precision Driving Academy in Independence hosted by KCRSCCA. Not sure if I will have time to make it to any more this year, but I will be running the autocross at the Kansas Speedway Goodguys show Labor Day weekend.

@AutoX_a_Truck Nice, I only live about 10 minutes away from Blue River, you weren't there when I wen though, maybe I'll see you out at the Goodguys show.

Badass, love the look and shape of this truck! Amazing build engine and all!

I LIKE THE WAY THIS GUY THINK. You cant knock this build at all. LOVING the originally

What wheels are those? Love the style and offset.

Awesom build! The shape and lines of this thing very aggressive. I dont evel like american cars and i love this truck, way to be original man !

keep bringing these wild builds to our minds!

Wow I remember following this build on the Kill Billet forum. It also adds to the epicness that this was built on an absurdly cheap budget like $100 or something like that. Awesome truck.

Totoally gnarly truck and so cool to see it run a cone course on such wide tires! I love this, what a great build and it looks so mean and nasty.

Really, really, really like this. Wish there was more stuff like this haha, and wish we could register similar shit in Australia!

Really, really, really like this. Wish there was more stuff like this haha, and wish we could register similar shit in Australia!

Great looking project! Would like to see 360 pic of hole truck also what are the fenders from. Could you post pic of engine compartment. Really nice ride. Looking at doing a ride almost like this one. Thanks

i have a 48 F7 dump truck I want to build just like yours, using only the body. fenders are already 12 inches wider. bought some gibbon 14 wide rear fenders. got a 3/4 ton box, which is 6 inches wider. ill shorten it to match the wheelbase. got a 97 kia sportage ill use for the chassis. its built super strong and double wishbone and 3 link rear. I ll convert to 93 Suzuki sidekick rearend housing and mounts. has 104 wb. also has 5 1/2 ford pickup bolt pattern already. got a 351w 4bbl, fresh overhaul, imca mod cam, shoenfield 180s, Richmond 5 speed, circle track mini clutch. 487 rear gear stock. ill section the body 4 inches, not chop it. will resemble yours. built one like yours, 25 years ago with a 52 ford 3/4 ton pickup. stepped the frame in back, put the front axle on top of the springs. put a 49 cad motor with adaptor and 49 merc overdrive tranny. 10 wide 16.5 rims with monster mudder tires.. would like to see the front of yours... junkman 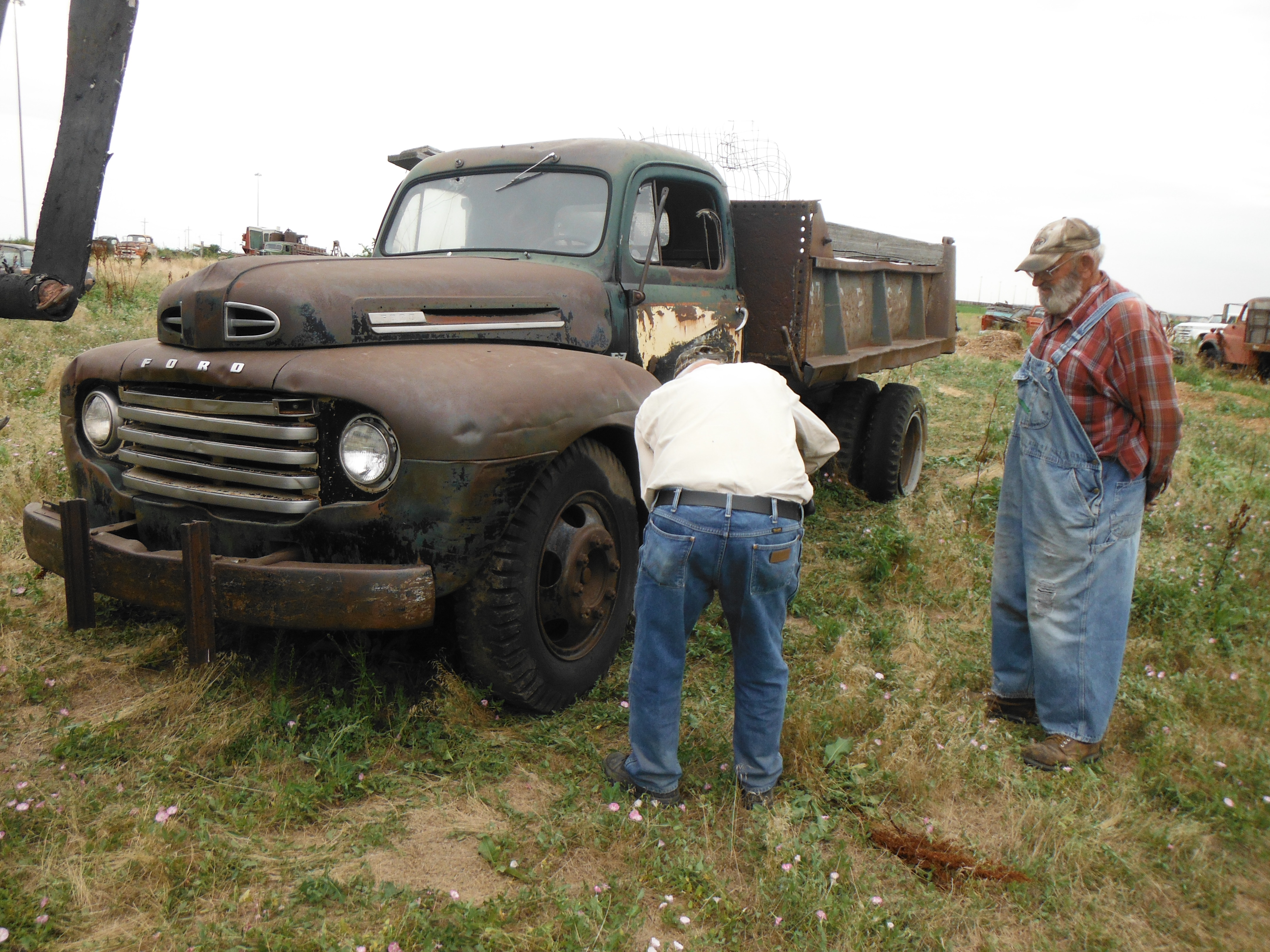