Team Need For Speed drivers Matt Powers and Fredric Aasbo will be competing in the first round of World Drift Series China in the city of Tianjin this weekend.

They line up  alongside fellow Formula Drift drivers Vaughn Gittin Jr, Chris Forsberg and Kyle Mohan at the event, which is  held inside the Olympic stadium.

Matt has been competing in China since 2009, but this was Fredric’s very first trip to the Communist country. I think they blended in quite well.

Fredric will be driving Chucky, the friendly right-hand drive Supra.

He looked great during practice and gave the walls a few love taps throughout the day.

It proved to be one too many taps, as his gas tank came loose during a demo tandem battle with Vaughn.

But it was fixed quicky and efficiently, and will be ready for competition.

Matt will be driving his LS1-powered S14. He got second place last year at the same event after losing to Vaughn in the finals.

This year he is back and with a few more upgrades. Who knows – maybe he will meet his team-mate in competition.

Stay tuned for updates as well as more in-depth coverage as the boys take on the rest of the field this weekend. 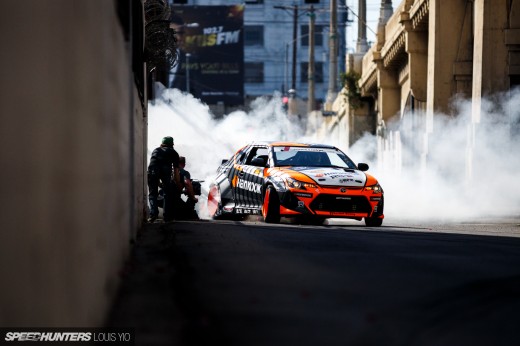 You guys have no clue how lucky you are. It is nigh impossible to import any of those cars for personal use.

looks like matt is running some of vaughn's HREs.

You guys need to learn how to use chopsticks properly. =P

Why would you import JDM cars into Japan?

the event is taking place in China not Japan

Believe me, They know how lucky they are.

@byron h It's not easy to go out and buy wheels over here, haha.

track looks very technical that long right hander after the sweeper looks killer ;)seriously though... no better tracks in china?

thats sick i cant wait to see this show going down, matt with his ls14, v. jr and his mustang, ohhhh cant wait to see Daigo saito a his vert is350 that car looks sick and his skills will be a killer, Fredric Aasbo and that supra is perfect combo! i wish he had the supra on formula d he would be doing so much better. but any ways all of them are super duper good driver wish all of you good time and the secret of winning competitions is always to have fun (which you guys know best)!