This year’s 40th edition of the Nürburgring 24 Hours served up all the usual things: the expected unexpected. To start off with there was the entry list: more compact than normal, but with an insane spread of cars and classes who would be fighting for the same piece of narrow tarmac. There was 24 hours of tooth-and-nail racing around the Nordschleife. There was that finish. And of course there was the hugely changeable weather, with skies altering by the minute in the run-up to the race as the racing gods decided whether to throw down thunder and lightning (cue Speedhunters waterproofs), burning sunshine (cue Speedhunters mankinis.You know you want them) or anything in between.

The track itself is as phenomenal as everyone says. Breath-taking even as a concept, in real life the living, breathing entity that is the Nordschleife leaves you with a feeling you’re never forget. It makes no sense at all to race here, but thank god they do. The covering of graffiti which is freshly applied before each race surely can’t do anything for grip…

Racing cars usually have a track map stuck to the inside, either on the door or the hub of the steering wheel. Normally I’m surprised they bother – how could you not know where you are on a regular track with a dozen corners? At the Nürburgring it’s absolutely essential. Drivers say that they quickly learn the Nordschleife despite its complexity, but still in the heat of battle it’s easy to lose track of exactly where you are.

The other thing about the Nordschleife that’s easy to forget is that it’s actually a public toll road. The Touristenfahrten route has an exit along the track at Adenau that you could take during non-racing weekends if, for instance, you wanted a pint of milk really, really quickly. This is the Breidscheid exit, closed during the 24 Hours perhaps to prevent any cheeky short-cuts.

But the best thing about this race is the spirit of the event. It’s all about racing. It’s not how fast your car is, or the size of your hospitality, but the taking part. Whatever you’ve got and whoever you are, there’s a real possibility that you too could place a 24 Hour Norschleife sticker on your own racing car and take part if you really wanted to, which isn’t something you could possible say about other major races.

Everyone praises what Nürburgring established… This place is the proving ground for many things. So, with a day of rest after our weekend’s travails, we’ve had a bit of time to reflect on the events of the last week.

For Speedhunters part, we were lucky enough to be paired up with the Belgian WRT team, running an Audi R8 LMS with an incredibly strong quartet of drivers. This gave us some great access over the weekend to really get under the skin of what makes a race team tick (and what keeps them going) during a 24-hour race – they’ll be more coming up on that soon.

To complement the car, we also had Camille Sebaoui and Julie Dovetta showing off a beta range of new Speedhunters apparel that the male contingent wouldn’t look half so good modelling.

It’ll be interesting to see what makes it into production. Let us know your favourites!

For the photographers, the lines of desks in the F1 media centre awaited us. This is the pristine condition on Wednesday afternoon, before everyone started arriving. How it looked at 6am on Sunday morning can be imagined…

Needless to say, a lot of this was necessary.

With well over 400 cars taking part in the 24 Hours, 24 Hours Classic, British GT and supporting Cup events, every inch of the in-field paddock of the track was taken up. Teams took many different approaches to setting up their working spaces for the weekend, mostly based on budget. The Vita4One BMW team went for the inflatable geodesic igloo approach, unique in the paddock.

The team were able to work on their two GT3 BMW Z4 Coupés in air-conditioned comfort whilst giving the paddock visitors good visibility of the goings-on inside: no opaque curtains here.

With the number of cars taking part, the tyre manufacturers had sprawling compounds for supplying the teams with constant stream of rubber that would be required during the week. Dunlop’s was a veritable rubberised Disney Land of machinery, trucks and tents.

The road-car equivalents of many of the racers competing in the 24 Hours were scattered around the paddock, including this trio of McLaren MP4-12Cs which had been driven over from the UK. Haribo had a number of Panameras liveried as per their Porsche race-car plus a golden Corvette to go with their C6R.

Skate-Aid had this Caddy on show opposite their stand: the skateboarders were involved with a charity supporting a Dodge Viper racing in the AT class – one of many cars that I only saw once and hadn’t even realised was racing. I caught the Viper right at the end of the race when it crossed the finish line… 24 hours late?

Time to turn into… Truckhunters! But this old Mercedes truck, being used by a German team running an Aston Martin Vantage GT4 in the SP10 class, was absolutely beautiful. A classy way to transport a racing car.

The paddock itself was buzzing all weekend, as teams hurried between the three long rows of make-shift garages, guests wandered between barbecues and spectators soaked up the excitement.

Camille and Julie were doing a fine job of dishing out handfuls of WRT Speedhunters stickers to the passing crowds – Speedhunters readers got the special extra of our new phone-sized line of stickers.

Anything and anyone was fair game for stickering…

Levels of cuteness varied – but everyone was friendly!

Our friends at Schubert Motorsport were running a pair of BMW Z4 Coupés as the official factory representatives of BMW, hence having a hatful of works drivers in their driver-line-ups. Veteran ‘Ring ringer Uwe Alzen was part of the crew for the lead #19 car; he’d go on to set a blistering lap in the Top 40 Qualifying to take the pole time.

Schubert team director Stefan Wendl was happily examining the new light clusters that would be fitted to the Z4s for this event; Like Audi, BMW also had a big presence at the track – they had a huge marquee erected on the outside of final corner of the GP track, where it peeled off onto the Nordschleife.

Of the seven works-supported Audi R8 LMS, these two had interesting line-ups: each car had a pair of pro drivers lined up with two amateurs. The gentleman drivers had been part of a training programme sold by Audi; the best four drivers were selected at the final event of the training and then added to the roster for the 24 Hours. The #25 car ended up a creditable 17th at the finish; the #24 suffered problems and finished well down the order.

The Gemballa McLaren entered the race in a flurry of publicity, as ex-Formula 1 driver Nick Heidfeld and DTM legend Klaus Ludwig were late additions to the driver strength. Ludwig had retired from racing but was tempted back for one more go, as so often happens with old racers; his son Luca was actually also in the race, driving the #9 Raeder Audi R8 LMS Ultra. Ludwig Senior would have an abrupt and dramatic end to his 24 Hours after he came together with a Seat Leon – thankfully both drivers emerged from the wreck unharmed.

Two more McLaren entries had slipped in under the radar, courtesy of Dörr Motorsport: both unfortunately suffered from poor reliability and accidents in the race and were out early.

The pair of low-slung Imprezas running in the SP3T class had some major support behind them: this is the Australian-crewed #117.

But the main focus was on the factory-supported Impreza GVB, #133.

A big huddle of Japanese media and Subaru PRs followed the mechanics and crew’s every move over the 24 hours – video cameras, SLRS and phones were constantly being pointed at the popular team.

As with Le Mans, some of the the Japanese manufactures take this race very seriously, stopping just short of full works-branded efforts.

The emphasis is as much on learning about the cars as it is victory in the race itself: there’s justified belief in the fact that you can learn more from a single race here than a year of testing. The results are then passed on to the road-car engineering team to be integrated into development programmes.

The Lexus LFA is a firm fan favourite and has now raced in various iterations at the Nürburgring 24 Hours since 2008. On the grid the drivers were swamped, and the car would go on to record an impressive 15th place finish overall – winning its class and beating its nearest challenger, the Aston Martin Zagato, by over 10 laps.

This year Gazoo Racing also introduced a pair of new Toyota GT86s to the ‘Ring: the cars ran well in the SP3 class against a mixed bag of Clios, Hondas and BMWs, winning the class by less than a lap but finishing 46th overall.

To complete the Toyota grand-slam success, a pair of production-spec GT86s in the V3 class entered by a Swiss team also won, against a pair of Opel Astra OPCs. The #200 car finished in 78th overall.

SP3 was hard-fought – it was one of the larger sub-classes, with 16 competitors. There were a pair of S2000s entered, but both had tough races and finished well down.

The two Nissan GT-Rs at the 24 Hours were of very different specs, but frustratingly lumped into the their own two-car class for the race. This meant it was more an internecine battle to see who could finish higher overall. The #123 GT-R finished in an excellent 30th position come 4pm on Sunday – this was the car crewed by the winners of the Playstation competition to turn gamers into drivers. Lucas Ordonez in particular has flourished, even coming second in the LMP2 class at the Le Mans 24 Hours last year.

The second GT-R was helmed by current World GT1 Champion and factory Nissan driver Michael Krumm alongside long-time Le Mans entrant Toshio Suzuki and Japanese Super GT drivers Tetsuya Tanaka and Kazuki Hoshino. This Track Pack version of the GT-R was deliberately entered as a test mule to see how the road-car would perform under extreme conditions.

And if you want extreme conditions… drive your Impreza into something solid and see what happens afterwards. #117 still finished, and in 73rd overall. I’ll take a look at some of the other class entries next up. 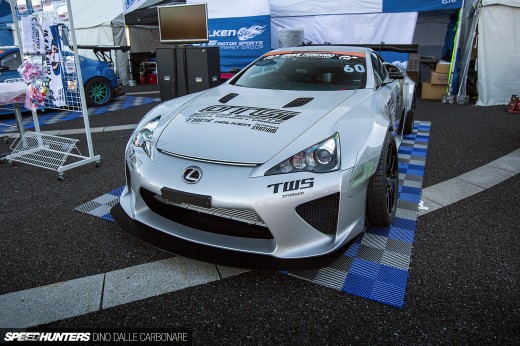 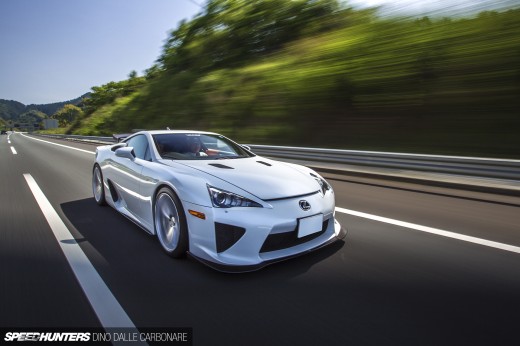 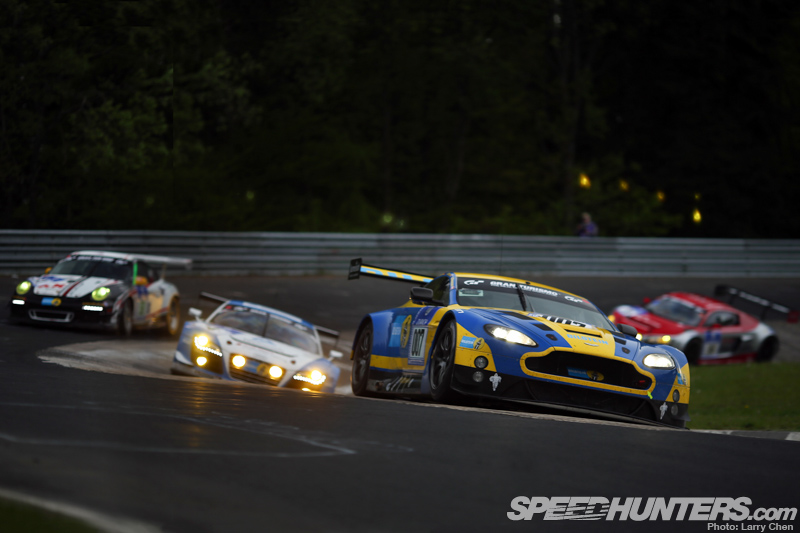 Amazing post and cars! I just wanna wear I can get a bus like that Mercedes-Benz in the states!?

I still want one of those Speedhunters hoodies!

please the gray hoodie i love it

Where can I buy the stickers and hoodies??

and those beats WRT stickers!