As you can see from the opening shot my last trip out to Phoenix’s Power in Kyoto was met with a bit of unexpected weather. But passing snowstorms aside, it was their Mitsubishi Lancer Evolution X demo car I was there to get a few quick shots of. The car has been built in collaboration with ings…

…sporting their full N-Spec aero kit for the CZ4A, the same kit that the Endless Super Taikyu (former Gr.N) Evo X is fitted with. Thanks to all the openings on the front bumper there is ample airflow reaching the intercooler and radiators while the asymmetric intake on the grille is there to scoop direct fresh air towards the air box under the vented hood.

Taller and angular side skirts follow, leading on to the rear bumper which on top of a pair of openings on each corner also sports a diffuser with built in fins. The car sits on 9.5Jx19″ Volk Racing GTCs shod with Bridgestone Potenza S001 street-tires.

Under the hood Phoenix’s Power concentrated on extracting as much power as possible from the stock 4B11. Upgrades include an HKS GT2 turbocharger kit, Tomei Powered 264-deg camshafts for both the intake and exhaust side and an HKS intercooler kit along with polished aluminum piping. Yokoyama-san of Phoenix’s put the car on the shop’s dyno and custom mapped the ECU, which now allows the engine to develop a healthy 425 HP and 361 lb/ft.

Aside from a triplet of GReddy gauges the interior is kept simple. The 5-speed manual gearbox has been joined with an ATS twin-plate carbon clutch to deal with the added power, while both front and rear differentials are fitted with ATS carbon LSDs.

Every time I am confronted with an awesome Evo X like this particular example from Phoenix’s Power, it’s hard to believe that Mitsubishi has decided to no longer continue the development of the Lancer Evolution. There should already be an Evo XI out by now. Come on Mitsubishi, don’t let enthusiasts down, there is still time to do the right thing! 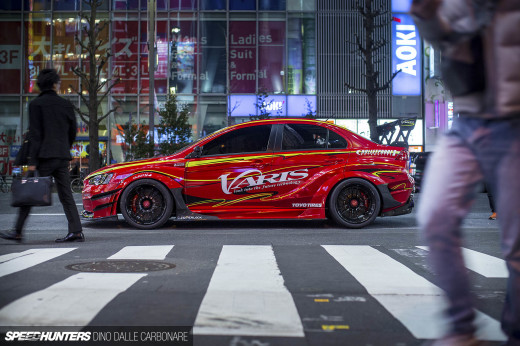 An Evo With Goals

Wow, the side skirts and horrible wheels combo make it look like a shite honda civic ricer

@d15b2 Fraid so, just not my bag. Hate wheels with a polished chrome look, far too blingy. Much prefer some subtlety. Now give that baby some Rota GT-R's and it's a whole different ball game...

Are you sure it's not a 5 speed manual gearbox?

@MichaelFenton well i have to agree with you michael.. why something that must drive like hell have to be so ugly?

@MichaelFenton  @d15b2 Im sorry, Rotas are better than Volks? Your kidding right? I agree, the wheels look ugly, but I would rather have these hideous looking Volks then a fake pair of Rotas

@Donld   What's so wrong with Rotas? So what if they don't cost a bomb, they're still no less effective than more expensive brands. But if you want to stick with "premium" brands like Volk, then stick some classy TE37's on this thing. My main beef with it is the polished chrome finish combined with the massive side skirts, reckon the stock wheels and aero package give a far more cohesive look.

I never thought I'd see the day where I thought GTC's didn't look right on something. I guess that day has come.
The rest is alright though.....

@MichaelFenton  @Donld Rota rips designs off reputable companies and sells them as their own under a different name.
Rota GT-Rs were meant to resemble RAYS LMGT4s I presume, but they probably aren't designed for track-use since hardly any R&D goes into 'designing' each wheel.

Dekstop 4 all above Pics...

personally i love the car, but i do agree wit the crome finish( not a fan), otherwise this is a great piece of work....

Just not sure about the front end...but nevertheless this thing is a beast

That is, by far, the ugliest thing I have ever seen.

Never understood the Volk GT-C hate. I've always thought they were good-looking wheels. I may be biased, though.

@Dekro I agree, ugly. but it is like marrying a supermodel with a a scar on her face
The performance and handling is awesome. The evo 6 is the best evo yet.

I'm not sure if it's ugly or just really unique.

A bunch of kids found their way to speedhunters:)

Carlos Ghosn & Nissan should buy The Evo ... there's a need for a giant-killer sedan in his line-up.

i guess speedhunters is the new hipster joint. sigh... though i didn't expect to see someone defending Rota over Volk/Rays.

Maybe its just me, but I see nothing wrong with this vehicle. Its actually different from the ones I see all over the place. Wheels and all, a simple/clean build.

Although the front bumper is a tad functional, overall, that is an awful looking body kit.

yes we all know that the body kid is hella ugly but you got to admit performance wise and handling is surely great! the wheels are pretty cool...

Looks like a stock lancer LS with huge wheels and a bodykit. Might be an Evo under all that mess, but I see about 94191 similar looking cars on my daily commute to work. Terrible looking car.

The steering is super sensitive and the engine is very jerky. It feels like you are driving a coiled spring. The Evo always wants to explode with power. This is partly due to the turbo boost and the gearing ratios being short.
____________________________________
http://www.buytrucksinusa.com/used-trucks/

wow the best car even in my dreams