When it comes to Hot Rodding or just car culture itself, there are few logos more recognized than the pair of eyeballs that represent the famous speed parts company started by Dean Moon 60 years ago.

Whether its worn on the side of a Hot Rod on the Bonneville Salt Flats, or a kei car on the streets of Tokyo – the appeal of the Moon brand spans several generations and many international borders. But how did it all begin?

The life and achievements of  Dean Moon and his company are the subject of an extensive new exhibit at the NHRA Museum in Pomona. During a recent visit to SoCal, I had the chance to drop by the museum to see the exhibit first hand.

Through a collection of photographs, artifacts, and vehicles the exhibit presents an in-depth look at Dean Moon’s contributions to the automotive world. From his humble beginnings building parts in high school shop class through his untimely passing in 1987 and beyond.

There are many who are familiar with brand, but less people know about Mr. Moon himself – especially those from younger generations.

Sourced from Dean Moon’s family, friends, and the company itself – the display is packed full of Moon history.

The exhibit has gathered several vehicles built and owned by Dean Moon, along with other notable cars equipped with his speed parts.

This 1924 Model T Roadster was built by Creighton Hunter in the early 1950s and included a number of Dean Moon’s early parts. Known as the Hunter Oil Special, the T was raced at the old Santa Ana Drag Strip in Orange County.

What’s particularly notable at the car is that its the first example of the world famous “Moon Eyes” logo. The T wore the “00” number and once a pair of pupils were painted inside the numbers , an iconic logo was born.

In 1957 Dean had the logo redrawn by a Disney artist and the resulting version has been in use ever since.

As a Speedhunter, one thing that I found especially interesting about Dean Moon’s life was his work as a photographer. After his formulative years building parts for local Hot Rodders in Santa Fe Springs, Dean served with the US Air Force during the Korean War. He attended Air Force photography school and quickly took a liking to the subject. Following the war he made quite a name for himself shooting photos of the growing Hot Rod scene, freelancing for magazines, and photographing his own products.

After Dean returned from Korea he set up Moon Automotive in a shack behind the cafe his parents owned in Santa Fe Springs. Among the brand’s early products were these foot-shaped gas pedals which sold 200 units in their first month on the market.

Among Dean Moon’s products are several which hold legendary status within the Hot Rod community. In the early ’50s racers struggled to find safe and effective small capacity gas tanks for their cars. After Dean Moon saw this, he introduced the spun aluminum Moon Tank, which could be had in many different sizes and could fit anything with an engine. If you were to build a retro drag car these days, it’d be wrong not to have one of these babies mounted on it.

Perhaps the product that the brand is most known is the Moon Disc.

The aluminum Moon Disc was first introduced in 1955 and quickly became a staple among Hot Rodders and high speed racers on the salt flats and dry lakes. By the late ’50s 10,000 of these discs were being sold in a single month. By this time, Moon had moved into their current location on Norwalk Blvd. in Santa Fe Springs.

Moon Racing Cams were also an integral part of the business, thanks to the talents of Bill Jenks – who designed cams in the Moon machine shop all the way to his death in 2009.

Besides examples of the actual speed parts,  the exhibit features all sorts of memorabilia and branded items seen over the course of the company’s history.

From old sneakers adorned with the famous Moon logo…

…to a Revell model kit of the Mooneyes Dragster.

In 1963 the Mooneyes team brought their dragster to England and this is one of the original jackets the worn by the crew during the trip.

An interesting historic tidbit here. Moon Equipment was actually called on to build Hot Rodded Chevy V8 engines for Nissan’s R381 race cars in the late ’60s. This is the motor that powered the R381 to victory in the 1968 Japan Grand Prix.

The NHRA museum did a fantastic job sourcing cars that represent the achievements and influence of the Moon company. The lineup includes a few examples of salt flat cars, like Moon-equipped Super Shaker built by Bill Burke in the late ’50s.

Making the Super Shaker look minuscule is the Moonliner. Originally built by Jocko Johnson, Dean Moon purchased the car in 1964 and at Bonneville it recorded a top speed of 285MPH at the hands of driver Gary Gabelich.

Fred Larsen worked alongside Bill Jenks in the Moon Machine shop beginning in 1961 and this is the Roadster he built with his friend Don Cummins. The car recorded a top speed at Bonneville of 242 MPH and is now restored to its 1964 appearance.

The next project to come out of the Larsen-Cummins partnership was this Bonneville Streamliner powered by a destroked 265 cubic inch Chevy. The car ran up to 313MPH before half the cylinders were banked off resulting in a unique V4 setup. Using the modified 120 cubic inch engine, the car did an impressive 258MPH. Naturally, the car is equipped with a full spread of Moon parts.

If I were to choose a personal favorite car from the exhibit it wold have to be the Mooneyes Special Competition Coupe.  This heavily modified ’32 Ford was originally built by Tim Cunha and Willie Dorsey and is sporting a 427 big block Chevy.

With 528 horsepower on tap it’s been up to 178MPH at Bonneville with its current owner Tom Malloy behind the wheel.

When Dean Moon passed away at the age of 60 in 1987, the hot rodding community had lost a legend and the future of the company was uncertain. Not long after, the brand was reorganized under direction of Shige Suganuma and Chico Kodama. Shige had been distriubting Moon products in Japan since the early 1980s and had become a close friend of Dean Moon and his family. Mooneyes USA was born.

Shige saw to it that the Moon tradition was preserved.  In addition to buying and renovating the original Moon Equipment shop in Santa Fe Springs,  he gave the brand an entirely new presence in his home country of Japan. I’ll actually be making a post from my visit to Mooneyes Japan next week so keep an eye out for that.

If you’d like to see the Dean Moon exhibit for yourself, it will be featured at the NHRA Musuem for the remainder of the year.

Needless to say, I highly suggest you check it out if you have the chance. Regardless of your specific automotive tastes, it’s hard not be inspired by pioneers like Dean Moon.

The Moon Legend Lives On In Santa Fe Springs 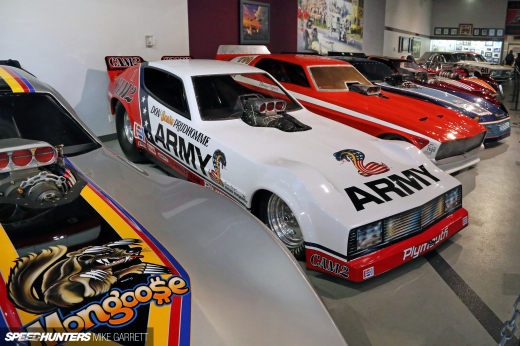 more on the moonliner!!! that thing looks nuts!

Lol, when I saw the Moonliner on the preview, I was like "Eh ? Mooneyes have a powerboat ?"

Do they still do the summer meet in Norwalk or just the XMAS one now?

I love the NHRA museum, and all their mooneyes stuff.  I got some good shots of the moonliner and the 32.  Was super fun.

I've been to the shop in Santa Fe Springs many times, but i learned so much more from this post. Thank you for an awesome history lesson. Great post!