The mixed-class format features five separate classes all racing at the same time and the difference in pace combined with the tight and technical street course make Long Beach one of the more exciting events on the schedule. While ALMS races have been known to be settled on the final lap in six- and even twelve-hour events, things get much more cramped in LBC.

This event is tied with the Baltimore Grand Prix as the shortest stop on the tour with a race length of a mere two hours. This time restriction means that this street race is more like a two-hour sprint at qualifying pace punctuated by only one pit stop. Traffic is thick and passing here is extremely difficult which means that grid position goes a long way and a quick pit stop is critical.

But the allure of this race isn’t simply the restrictions the track imposes but also the circuit itself which holds an aura all its own. This event is often referred to as “the Monaco of America” and the course is rich in history that I’ll be addressing in further detail later. The legacy of the circuit and its geographical location draw in a crowd of race fans unlike any other track in the US and it’s also the home course to many of the drivers.

Perhaps the only unfortunate draw back to the circuit is the cramped schedule and paddock area compared to other races in the season. Since there are so many series running over the course of the weekend track time and paddock space is severely limited. In the case of the ALMS contestants this meant one practice session on Friday morning, followed by a fifteen minute qualifying session and then the two-hour race on Saturday.

I don’t think anyone was expecting a torrential downpour for the GP weekend since the event is usually synonymous with SoCal sunshine, but that’s exactly what the weatherman forecast for Friday and for once he was right. Things were off to a poor start and many of the competitors were wondering what the rest of the weekend would hold. The k-rails on the street course do a terrible job of ridding the circuit of water and the track was littered with puddles everywhere rendering the practice session borderline useless. The conditions were so bad that the GT cars were lapping the circuit within tenths of the prototypes as the wedge cars were operating mostly off mechanical grip due to the low speeds.

When I finally arrived in the paddock area the rain was still coming down heavily with no sign of it letting up. Since qualifying was several hours off I ducked into the media center and had a coffee and let my clothes dry out. An hour or so later I decided to pop back outside to look at how things were shaping up for the qualifying session. To my surprise the sun had come out and vapors were raising form the asphalt. Qualifying would go on and was called as a “dry session”.

The first cars let out onto the circuit for qualifying were the GT Challenge Porsche Cup Cars. 911 hot shots Leh Keen and Michael Valiente would spend the next fifteen minutes trading times for pole position lap after lap. Eventually it was Valiente who would land his JDX Racing 997 at the front of his respective grid. With the GTC cars all finished up it was time to let out the GT category.

No sooner did I see the first of the GT cars rolling out of pit lane than the recently darkened sky started to open up. What was initially a gentle sprinkle became a persistent nuisance by the end of the warm up lap. After the first hot lap the rain kept getting worse, which would have played into Wolf Henzler’s favor as he the fastest man in the wet during morning practice and was currently at the top of the time sheet. The rain quickly became too much for the slick tires and the field retired into the pit lane, but since the session had been called dry the teams could not switch to wet tires. 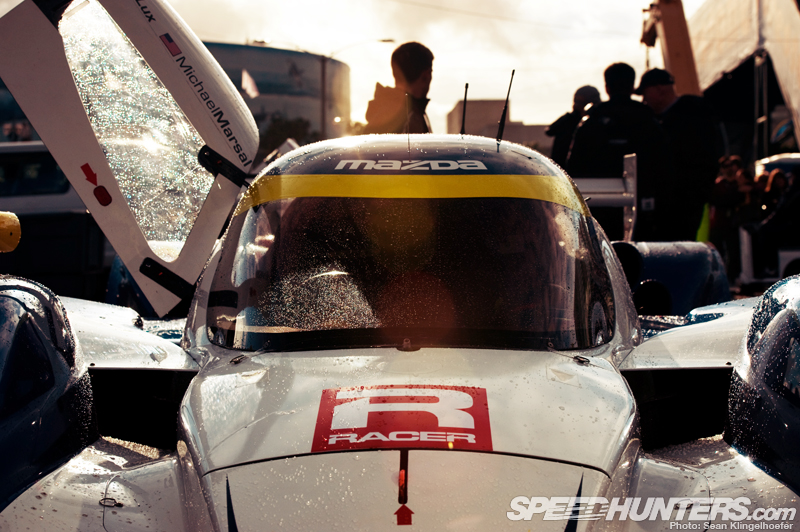 The session was inevitably cancelled at that point and none of the prototypes even made it onto the track. Due to ALMS qualifying rules, each class has to have a full ten minutes of qualifying time to set the grid – something that did not happen. Instead the grid would be set based on points from Sebring, much to the dismay of many drivers including Valiente who’s efforts were all for naught.

For certain cars like the #56 BMW of Joey Hand and Dirk Müller things were looking very good based on their excellent result at the first round. Meanwhile much of the field would be forced to relive the painful misfortunes of Sebring adding further insult to injury –  in a nutshell, a metaphor for the unpredictability of Long Beach.

The forecast for the race the following day was to be dry and sunny and here there were only a handful of cars that even clocked one dry lap, let alone enough to get a meaningful impression of the circuit and the car. To further worsen the matter all the water kept the track from rubbering up so even the teams fortunate enough to have data from years past would be gambling on setup.

Thousands woud come the following day to watch a race completely up for grabs. With many of the potentially faster cars starting from the back of the grid it would be a hard fought battle. Only a combination of luck and skill would be good enough to win Saturday’s race. Stay tuned to see how things unfold in part two tomorrow…

More from the Grand Prix of Long Beach on Speedhunters

The standard of photography on here just gets better and better, these are great shots!

This is a terrific article. Shots were great but I was particularly impressed with the writing. Way to step it up.

Man, I should have gone. I was expecting the rain to carry out throughout the entire weekend and didn't want to risk getting my lens wet, even though it's "weather-sealed"