Finally I got the chance to visit Techno
Classica in Essen, Germany. This show has somehow eluded me these past few
years, but at the beginning of 2012 I put a big red circle around this year’s date. After seeing so many pictures online from previous years I knew it
wouldn’t disappoint. The show presents itself as the World Show for
Vintage, Classic and Prestige Automobiles, Motorcycles, Spare Parts
and Restoration, and all the major manufactures from Germany showcase their automotive heritage. Because there were so many cars I’ve decided to split them up into categories. Let’s start with one my favourite brands: BMW.

The BMW stand was huge, with several old
racecars and a special display dedicated to the 3-Series. One of the coolest racecars on the
stand was this beautiful red BMW 2002.

It was in absolute concours state as can
been seen inside the engine bay.

The other car that really grabbed my
attention was of course the E30 M3 that competed in the DTM. It is the same car
that Rod and I saw late last year at the Essen Motor Show. So I have seen it
before but now I got the chance to take a closer look. BMW also removed the
hood to give a clear and unobstructed view of the engine.

How I would love to hear the sound of this
car when it’s fired up!

The car is powered by this 2.5-litre 4-cylinder engine producing 335bhp, giving it a top speed of 310kph. The carbon
airbox is a very nice touch, together with the fluid hardlines that run through
the engine bay.

Next to the E30 was its much younger brother.
This is the E92 M3 DTM that will compete in the 2012 DTM season – I know that everybody at Speedhunters can’t
wait for this series to start.

How can you not love the 2002 Turbo? This
was the first European production car with a turbo. It’s also one of the most
important cars in the history of BMW.

The car doesn’t wear the famous M logo
because it predates the creation of BMW’s performance division. This 2002 was built and developed by the BMW
Motorsport team that would later be renamed to BMW M.

Right next to it was this road-going
version of the M1. The press release stated that there would be an M1 Procar at Techno Classica, but
instead BMW displayed this. Although less dramatic it is still a car that had a
great impact on BMW’s history.

Tucked away in a corner was this immaculate
BMW 3.0 CSL. It was built as a homologation special to be eligible to race in the
European Touring Car Championship.

The car dominated the series from 1975 until 1979. In total 765 of these cars were built, making them highly sought after and consequently
very expensive to buy.

The visitors weren’t very interested in
this little car as you can see in this shot. But from a distance I recognized
it as the 700 RS, a car that had been developed to compete in hillclimbs. It
has a tubular-frame chassis and an aluminium body.

Power comes from a 2-cylinder Boxer engine
that has 70ps. Thanks to the lightweight shell of just 630kg it was able to
reach a top speed of 160kph.

BMW also invited private owners to showcase
their pride and joy. One of the cars that was hard to miss was this yellow Alpina
B12 5.7 Coupé based on the 850 CSi. As the name suggests it has a 5.7 liter V12
engine producing 416bhp.

Another Alpina model was this B7 Turbo
based on the E28 528i. The cool thing was that all of these cars were privately
owned. I also believe that the majority of these
cars are kept in storage most of the time, so you won’t see them again any time soon. Some of them were immaculate and in
concours condition.

For instance, where on earth would you find a 635 CSI in
such condition?

At the show BMW representatives were on hand to help you find that one special part to complete your
restoration.

In the back of the car was this beer tap – because we are in Germany after all!

BMW reserved a special part of their stand
for the 3-Series, starting with this E21.

The E30 right next to it is my favourite 3-Series model.

After the E30 came the E36 and the E46. I
guess they forgot the E90 but instead they showed the latest version, also known
as the F30.

I’ll leave you guys with a few shots of this M1 Procar I found in a different hall. It belongs to Franz Ostermaier, who still
uses it as a racecar at the annual Old Timer Grand Prix at the Nürburgring.

I never realized that the engine was so far
back. It’s almost in the centre of the car, giving a perfect balance. The engine
is a 6-cylinder inline unit with a capacity of 3.5 litres. The maximum
power of 475ps is achieved at 9,000rpm.

Just look at those rear tyres – and check out
the exhaust. Amazing. I would love to see this car in action and hear it go
full speed on the Döttinger Höhe at the Nürburgring this year. I’ll be back with more from another major
German car builder. 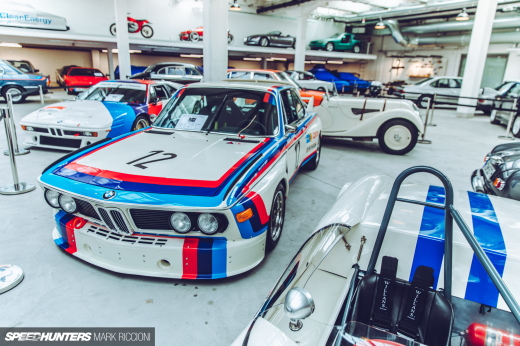 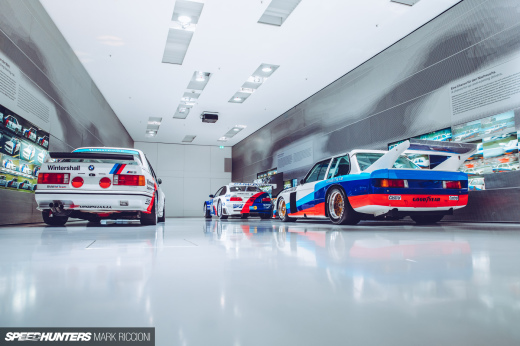 Thanks for the BMW showcase. I am pleased to see that the collection contained so many claasics. Unfortunately I cannot help but feel that BMW have lost their soul in recent years, however we will always have the E30 (also my favourite 3 series) as well as the multitude of other great BMW classics thanks to the thousands of enthusiasts out there.

HEY, Speedhunters, the engine on the M1 Procar is not "far back" is so far in front! If it would so far back, it will be exactly like in a 911 Porsche, so it is in central position. In the back, but far front.

Long before the brand turned into the OC status symbols of douche bags and spoiled princess.

oooooooooohhhhh i need those Bimmer's as my desktop!! please. LoveIt

700 RS is breath taking.. never get enough of that car

Great post! I love to see european cars and old bmw`s. Too much japanese in the tuning scene for my taste, but the time attack cars are technically interesting. Keep the european stuff coming. The german hillclimbing scene is awesome!

you can hear the M1 Procar here!!

where on earth would you find a 635 CSI in such condition?

America ofcourse.. did you not notice all the INYOURFACE chrome?

I still love the sticker on the front bumper of the 2002 odruT.. Masterpice!

Great coverage, thanks. Cool to learn about the 700RS, I'd never heard of it before.

Can you give horespower figures in BHP instead of PS please?

What an amazing post! More BMW! This was great, seriously, like going to the BMW museum and it seemed like so much more than a show.

I agree with you about the e30...best 3 series and, I think, best BMW ever made! Check out my website for pictures of mine!

Nice! All of these old BMWs look awesome, and there were no stanced pieces of crap!

Some awesome Bimmers, great post. How I would love an E30 M3 touring car...

Desktops, all of them! I love old Bimmers and certainly hope to own a few once I get out of college. Great coverage, thank you

gotta love the M1 in any of its forms, hats off to that lovely Old Timer! such a great post.. - Thanks

I will defenitly own some of these in order to die in piece ....

the 700rs looks like it can't decide which way to face. and the new dtm machines look amazing

New bimmers are so bleh. Heavy as all hell, too expensive, and entirely electronic feel to it when driving. Loving these old machines though, 2002 race car esp.

You can see and HEAR some DTM E30 M3's and M1 Procars (and a lot of other historic race cars) in a racing class called Histo-Cup.

It's an Austrian racing league which has races in Austria, Germany, Italy, Hungary and Slovakia. You can take a walk through the paddock too and look at all those great machines.

Last year there was even a turbocharged M1 Procar!

It's really worth a trip, you can combine it with a trip to WTCC at the Salzburgring in May

That last pic is like getting a glimpse up a pretty girls skirt... yum