SHARE Photos Of The Year 2011>> Random Clicks Of The Shutter

If I had to single out just one moment to be my favourite of the year, I think this would have to be it. Turn 6 is the fastest corner of Singapore's Formula 1 street course, but being wedged between two skyscrapers means it's too tight to accomodate spectators. Except for a couple of safety marshalls, I was all alone as the cars came straight towards me at 175mph. From this distance you could see the driver's eyes as they turned into the kink. Only a few were brave enough to use DRS in their opening laps.

This year I was fortunate enough to work alongside some talented people. Like Mr Roegge who, armed only with a suitcase and a camera, has been travelling the world shooting cars and living life to the fullest.

Plenty of rubber was tattooed onto the public streets of Long Beach. The shadows in the foreground were from the ominous clouds gathering overhead.

When you relocate to a different country, one of the things you have to get used to is the local accent. Not long after I moved to North America, I realised it wasn't just the people that had unfamiliar accents; the drift cars did too. Standing behind the Long Beach start line, surrounded by a pack of grunting V8s, was quite a foreign experience. While they may have looked the same as the drift cars in other countries, they certainly didn't sound the same. But irrespective of the ongoing V8 debate, I think few would disagree that 2011 was a vintage FD season. For years people will be talking about that championship fight.

A sudden, but torrential, downpour soaked the Long Beach course. Afterwards Ross Petty made sure his tyres were extra toasty before trying out the slick track.

Being new to the FD calendar, the drivers had to learn the Palm Beach track as quickly as possible. Here, Dmac observes the first practice group as they do their exploratory laps. It soon became apparent that the course was too risky and the organisers reconfigured the layout.

Your heart stops the moment you realise a crash is about to unfold. Everything goes into slow motion. To my left, Khudar El Haouli had spun. On my right, Cole Armstrong had just initiated his 3rd gear drift. From that point on, you knew that everyone involved was a passenger. Many of these guys compete on shoestring budgets, throwing every dollar they have into the sport they love. It was painful to see them hurt like this.

It's a poor quality photo, but it always brings me right back to that moment.

The Eastern Creek pitlane was eerily quiet in the minutes leading up to the final session. You could cut the tension with a knife as the drivers prepared for one final crack at the stopwatch.

Scorch Racing may be a small privateer team in Japan, but they've amassed a cult following around the world. Many of their fans came out to support them at WTAC, but unfortunately mechanical gremlins hampered their weekend. 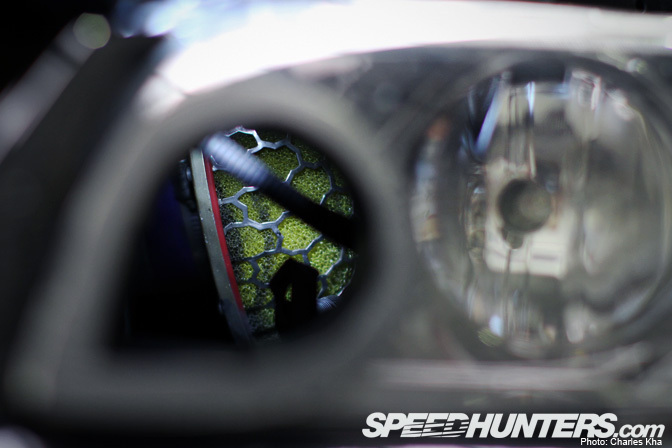 It didn't have the biggest power figure, the lightest weight or the most grip. But Nik Kalis' street registered Evo was simply untouchable in WTAC's Open Class.

After a brutal week of organising, shooting and writing, our Sydney trip had come to an end. We had over 50 articles in the bag and countless memories to share. On a personal level it was also great to return home, albeit briefly.

This was taken at the end of day one at FD Atlanta. JTP, called in for a weight check, looks on as other drivers lay down lurid burnouts for the fans.

I'm not sure if I'll ever witness another drift event as crazy as Irwindale 11. The only thing missing from this blockbuster were Hollywood explosions.

I really miss the sparks from the good old days, when F1 cars didn't have a stepped floor and wood plank.

Although socialites and A-list celebrities mingle just a few metres away, there's nothing glamorous about the life of an F1 mechanic.

Despite running his Ferrari on the ragged edge, the best Fernando Alonso could achieve was fourth on the grid.

After each session, F1's drivers are ushered into the media pen to face the world's press. If you see a scrum of arms, cameras and microphones in the paddock, chances are there's a driver somewhere in the middle.

Vettel leads the opening lap, his RB7 cocking the inside wheel as he aims at Turn 3's apex. In the background, Nico Rosberg is forced to take evasive action.

While Vettel has consistently been able to build a gap at the start, team-mate Webber has often struggled to get away. Singapore was no different, with the Australian finding himself in the thick of it. This photo was taken between Turns 19-20, where the cars drive underneath the Bay grandstand. The tunnel's floodlight created a nice point to aim at.

I might be in the minority here, but I loved the cackling howl created by Lotus-Renault's forward exhaust. It's a shame they'll be returning to a more conventional exhaust layout – and note – next season.

If your Formula 1 action isn't spicy enough, add some Pirellis. Although Vettel walked away with the championship, we were still treated to enthralling racing thanks to the new tyres, DRS and KERS.

Unless he was lapping a back marker, Sebastian Vettel always had the camera frame all to himself.

"The rears are shot" JR shouted from the driver's seat, as we hurtled down a two-lane access road at 100mph. "But they should last."

And that's how my first RTR-X ride began.

The only thing worse than waking up at 4am is having to get up at 3am. None of us complained though, especially when treated to sunrises like this.

Chris Forsberg is going to have some wonderful stories to tell the grand kids, that’s for sure.

Thanks for a great year everyone!

Photos of the Year on Speedhunters

What a year! Keep it up guys!

would like to have a wallpaper of the fitst photo

Those are some slick shots! Could you put up a wallpaper of the RTR-X shot?

Some great shots in there, some the F1 shots you posted in the full article were superb.