Over the weekend, the annual Race of Champions event took place in Germany.

The venue was Dusseldorf ESPRIT Arena, which was transformed from a pitch into a one-kilometre course complete with crossover.

The idea of Race of Champions is to pit various drivers from different disciplines against one another, with everyone in identical machinery.

The drivers duke it out in a variety of cars, such as the Audi R8 LMS, Skoda Fabia Super 2000, KTM X-Bow, World Touring Race Car and the 475kg ROC Car.

The event is held over two days. On the first day is the ROC Nations Cup. In this competition, drivers team up to represent their country.

This year saw some interesting line-ups, particularly Team Germany vs Team Great Britain. An upset was on the cards after Jenson Button disposed of Michael Schumacher, however Button spun out of the best-of-three decider against Sebastian Vettel.

For the fifth time in a row, Germany took out the Nations Cup. With nine Formula 1 world championships between them, will anyone be able to stop Sebastian Vettel and Michael Schumacher?

Norbert Haug is a familiar face in the world of Formula 1. As the head of Mercedes-Benz's motorsport activities he can usually be found on the pit wall, however for ROC he donned a helmet and had some sideways fun instead.

Like previous years, Stig Blomqvist put on a show in the Audi Quattro.

The main event took place on Sunday, where the drivers competed for the Champion of Champions title.

Representing the United States was Brian Deegan and Travis Pastrana. Neither driver was able to progress out of the group stages.

Reigning GP2 Champion Romain Grosjean failed to make it out of his group where he went up against Tom Kristensen, Sebastian Vettel and Vitaly Petrov.

The British contingency had an awful quarter finals, with Andy Priaulx, David Coulthard and Jenson Button all knocked out in quick succession.

Michael Schumacher exacted revenge for his loss last year by eliminating compatriot Vettel in the Quarter-Finals.

The final was between Sebastien Ogier and Tom Kristensen, with the winner determined after a best-of-three race.

In the end, it was rally driver Sebastien Ogier who was crowned the 2011 Champion of Champions. 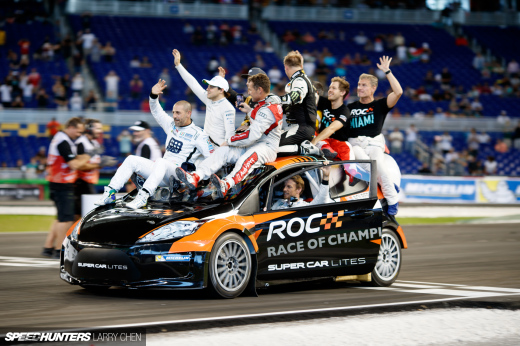 Through My Lens: Race Of Champions Miami

I'm not surprised that team "USA" got knocked out so early...

Any good vids or online coverage of the ROC?

why do we send such terrible drivers to represent the US? does no one else care enough to go? Tanner foust is mediocre at best, but Brian Deegan? Come on now. Seriously. I realize that they're much better than me, but surely they arent the best we can come up with as a country.

I hope that KUBICA and GIERMAZIAK could represent Poland in 2012

[View:http://www.youtube.com/watch?v=0qxAj0aeUbE:600:375] If you missed the TV broadcast or livestream

there missing a letter...it should be IROC...think about it, it is infact an international race of champions.

y did we have to former freestyle mx riders as our drivers? kinda confused on that one

y did we have to former freestyle mx riders as our drivers? kinda confused on that one

Those were team USA's drivers?!?!? is this a "cool" contest or a freakin RACE??? zomg we fail so damn hard :/ At least Tanner kept up last time. Where was Tommy Milner when we needed him?

Not to shit on the achievements of Deegan & Pastrana, they are pretty rad individuals and awesome drivers but how is this fair when Germany fields 2 multiple Formula 1 World Champions?

I was there on Saturday... great event, awesome sound in that arena.

Yeah we really need to send some better talent. Like Marco Andretti or someone from the open wheel ranks? Heck even Patrick Long would be more suited and he is a sports car/prototype driver.

Not like anyone races in australia or anything, and team usa is a joke

i agree with middleman! why didnt we send like tyler maquarrie??

Apparently the Americans must have thought that there was a motocross component!

I agree with Middleman147, how did our guys lose so quickly?

And while i'm here, what were those buggy/karts in the second from the bottom pic? They look fast.

The WRC has the BEST DRIVER

Too bad they didn't make that on a real track with a better selection of driver ,that would be very interesting to see what they can do with the same car

Team USA should have been Patrick Long or Joey Hand from the sports car ranks, and probably Alex Rossi. And Australia seriously needs a team, with Webber and either Jamie Whincup or Will Power.

Whose idea was it to send those clowns to represent USA? At least send over some of the NASCAR guys. Heck Carl Edwards won Driver of the Year at the ROC, and even beat out Michael Schumacher one year. It even makes more sense to do it because they have STOCKCARS this year!! What do NASCAR drivers drive again? /rant

Ok, atleast Pastona has raced a car before, he is not a horrible driver, despite what his performance showed. But has Brian Deegan ever raced anything with fourwheels??????

+1 for Australia sending a team. Although Mark Webber probably would have crashed..

nice job america sending two of the worst possible choices.should have gone with tony stewert and tommy miller instead of those " over rated pop star drivers "

Deegan races Pro light and Pro2 off road trucks. Pro2 trucks are rear drive and have up to 900hp+. Either way, america has far more qualified drivers than Deegan and Capt Breakflip.