SHARE Nfs Euro Spokesmodel Search >> … And The Winners Are …

When first asked to help judge the NFS Euro Spokesmodel search, I jumped at the opportunity.  In addition to helping out my friends in Team NFS, I was eager to share the experience of a lifetime with the spokesmodel candidates.  Along the way, I met a lot of wonderful girls and I have to admit that it became increasingly difficult to pick out clear winners as the search progressed. Yet now that the project has come to an end, I am equally excited to introduce you to the two lovely ladies who will be on tour with the Speedhunters crew in Europe next year.

…the newest additions to the Speedhunters crew

For two full seasons now, I’ve been incredibly blessed to tour the US
with an amazing group of people, all of whom I’ve come to adore as friends.  From the drivers and their mechanics, to
the photographers and managers, we are all comrades who play significant roles in contributing to the big picture.

As NFS girls (with Courtney and Victoria above), we serve a variety of functions at each event BUT the
primary focus is to make sure that people have a good time!

It’s about time we brought this flavour to Europe, too.

For me, Speedhunting is more than just a mild interest in cars, it’s a way of life.  And I think these two girls fit the bill quite nicely.

To give them a glimpse of what a “day on the job” might look like, it seemed appropriate to have the final contestants join us for the last round of the FIA GT3 European Championship.

So just days after the final round of Formula Drift, I was on a flight from California to the Netherlands for a weekend at Zandvoort Circuit to meet up with them.

The scenery alone was a lot to take in.

For 4.307 km (2.676 miles), the Zandvoort circuit snakes around a series of grass covered sand dunes.  In one direction are cozy-looking huts and to
the other side is the ocean, lined with beach clubs and bars.

Though it was tough, I resisted the urge to frolick around like a toddler in a sandbox.

I joined Jonathan and Rod for some speedhunting and made preparations to meet the spokesmodel candidates.

Here Camille and Julie would get their first taste of life at the track.

While the mechanics worked, Camille closely studied their techniques and methods.

Believe it or not, she’s a professional mechanic in the French air force. So being at the track in such close proximity to race cars was a real treat.

At one point she stated that if she couldn’t be an NFS spokesmodel, she’d want to be one of the mechanics. I think she’s asking the Schubert crew to work on the BMW Z4 GT3 in this shot.

It’d be cool to see if something could be arranged next year.

Perhaps Fredric will need a tire changer at Gatebil 2012

When asked for words to describe herself, Camille said, “friendly, determined, applied, contentious, simple, authentic, natural, dynamic, determined, perfectionist and frank.”  We like!

Though Julie is not a wrencher…

…she wasn’t shy about her love for exotic cars and video games.

She seemed “at home” in the Schubert tent…

… and was eager to get a close look at the cars.

We’ve heard that Julie is quite the video gamer. In particular she loves playing racing games and claims that no one can beat her.

They love cars, racing games and travel… It sounds almost too good to be true doesn’t it?

Wherever the team went, we followed…

… tagging along from the paddock to the pits and starting line.

According to Julie’s interview, her love for cars made the track the perfect weekend environment.

Her calm and relaxed energy made our photo shoots a breeze.

On a personal level, I enjoyed them both and loved that they were genuinely interested in everything that was going on around them. Both Camille and Julie had chilled, down-to-earth personalities which made them super easy to like right away.

Like me, they were also impressed with the cars lapping the Zandvoort course.

They watched from the stands.

Meanwhile, Rod and I ventured our way around the track, indulging in the access that our media passes granted.

The media area had some sections that were very close to the track.   And though Rod was pleasantly surprised, he also warned me to be extra careful.

As if being in the path of a speeding GT wasn’t dangerous enough, I
also had to keep an eye out for projectiles like this baseball-sized
blob of used tire!

When the race was ended, I met back up with the girls to say a quick goodbye.

Though it was only in a day’s time, I feel like I got a pretty good idea of Julie and Camille’s personalities.  Overall, I think they fit the bill quite nicely.  With 2012 coming right around the corner, I wish them all the best and hope they’re ready for the ride of a lifetime!  Please join me in welcoming them to the team. 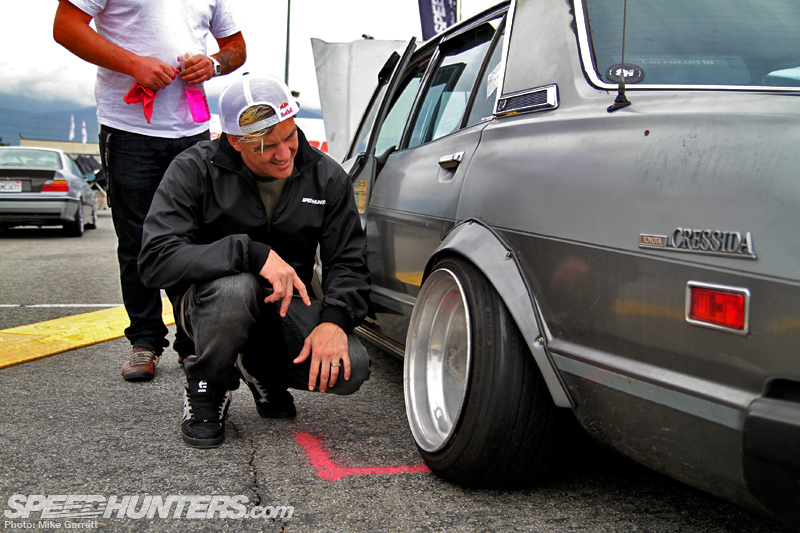 Very beautiful girl and WHAT!!! they love cars, racing games and traveling... girl of my dreams lol

Miki taka still the best...but they are all so cute!:)

Uh, is this a car blog or car model blog.

I'm still recovering from the mindless drivel spewed from the last model's article.

Hey Miki, it's also nice to see you with the team, I mean majority of the time, you'd expect girls to be models in a car scene. You're a rare breed I should say. Glad that Speedhunters are not just bunch of boys running about chasing speed.

DAMN! Wow Speedhunters... Julie is.. ....We need to delete this article, people just won't be able to handle it.

Way to friggin go. What a babe, and loves racing too, I cant even contain myself lol. We need more like her.

That's seriously ridiculous, but I'll calm down now. Camille is epic too for freakin wanting to be a mechanic. Wow.

Are there more girls like this in the world? Please let it be so.

They are very beautiful, but Miki is always the best

That right bro you cant find that anywhere i wish i had that kind of girl and i wonder how you get sponser by need for speed?

the other one is quite cute aswell though

Miki is still the hottest!

I dont think my last comment was approved lol.

I meant to say wow, that Julie girl blows me away. I can't even look at this page anymore, its dangerous to my eyes lol.

Seriously, WELL DONE SPEEDHUNTERS. The fact taht she loves racing and racing games and is just so easy on the eyes... Man I wanna meet this chick.

Honestly that Julie looks like a Victoria's Secret model. I would love to meet a race-loving, racing-game-loving, cute girl like her. Camille is amazing too, a mechanic? Wants to work on a Z4 GT3 racecar? Dreams come true.

Wow, never can be beat? See me in NFS World!

"Believe it or not, she's a professional mechanic in the French air force"

Can you make the first pic as desktop

Miki still the pretties one of all but the two new ones are pretty as well better then the last ones....

and the most important...

they are both french <3

Blondie is a HOTTIE!!

So glad these new models genuinely have an interest in cars, we need MORE female enthusiasts around here!

Congrats to you both, looks like its going to open a whole lot of doors for you both in many different ways (as in Camille and here mechanics trade - PS awesome to see a girl as beautiful as you not afraid to get grease under those naisl!)

Rather than drool all over my keyboard I'll wait till I meet them in person if I ever do to tell them how amazing they are and Welcome them to the art of Speedhunting (: look forward to seeing more of them mos def!

Hey Miki! Say this to Julie Dovetta from me!

I wrote that by myself with my French understanding

ummm..'French air force mechanic'...she can out-do some guys at the paddock aye? =P

Julie i luve u

The blonde girl is just perfect to me !

Hello gyus, where can I get the speedhunters stickers like in picture 1 ?? I need some for me car, thanks for your answer.

When everybody busy for the race, i'll get one of them for a date :p

im a mechanic in the american air force. =]

Unless your name is Dino Dalle Carbonare and you're faced with a fully packed Japanese event schedule, the majority of the Speedhunters crew are slowing the pace down slightly and are getting ready to present our photographic year in review. So without

Unless your name is Dino Dalle Carbonare and you're faced with a fully packed Japanese event schedule, the majority of the Speedhunters crew are slowing the pace down slightly and are getting ready to present our photographic year in review. So without

You are so beautiful