It really is amazing how the Japanese continue to inspire the drift scene internationally, whether it be a new trend, style or an event such as the Drift Matsuri held at Ebisu Circuit. This past weekend was the 24 hour Queensland Drift Matsuri; the first big Matsuri-style event held in Australia. Held at Queensland Raceway, it pulled around 200 entrants along with many spectators.

The cars arrived early Saturday morning in readiness of a huge weekend of grassroots drifting. The Queensland Raceway pits were packed to the rafters with cars.

I don’t recall seeing so many cars at Queensland Raceway in the six years of shooting there. Here is Danny’s PS13 with 15″ SSR Mesh rims. Under the hood it’s powered by a 1JZ.

People began to prep and unload their gear. Here is Seamus fitting a drift button to his handbrake…

…In his Trueno coupe. We will be taking a closer look at this car later in the month.

For the naturally aspirated cars, keeping weight to a minimum is essential, as you can see Nick Rombouts removing his R31’s amplifier.

On the subject of NA cars this Toyota KE70 driven by Mereki Dawson was looking very cool with its quad-headlight front end conversion, front lip and 14″ Watanabes.

Some cars were purchased purely for the Matsuri. Mitchell Geerdink managed to get his hands on a cheap R33 4-door Skyline.

However, some people brought their main drift cars such as Ross and his Onevia. You might remember us featuring this car a few months ago.

The Matsuri consisted of a few different driving areas. One of the courses was the Short Track which is located just in front of the raceway on a large paved area.

Another driving zone  was the skidpan, which was popular throughout the day.

Dan Rasell was looking super fresh in his newly decked out Silvia.

Andrew Hawkins was there to promote the upcoming round for his Australian Drifting Grand Prix series.

For some, the lack of sleep caught up with them by mid afternoon.

If drivers weren’t resting or driving you’d find them working on cars. Paul Samson, the new owner of this 4-AGE powered AE86 wanted a little more slip in the rear end.

There was a great variety of cars. I found this immaculate RB25DET in a R33 Skyline…

This PS13, owned by Magnus, was looking absolutely gorgeous.

As the sun started to set beneath the horizon it was time to get a few more action shots around the track.

The main track consisted of two layouts. The first one was down the back straight into turns 3 and 6. The other layout was turn 2, into the dipper and through turns 4 and 5. Here is Paul Dean from Motorman Imports entering into turn 3.

With the light quickly disappearing, I made the trek over to the Short Track.

All the S-chassis cars were killing it and the spectators were loving it. It was the right time of the afternoon to catch the sparks flying off the tires up close…

…And even from a distance.

Here is Danny parking up his PS13 with the sun setting. I also noticed a little damage on the front left of the car.

As the evening approached, there were a lot of cars in the sheds trying to get as much work done as possible. Due to complaints from nearby residents, the Queensland Drift Matsuri wouldn’t run around the clock; instead the track would close at 10pm, and then resume the next morning.

Some people had even fitted spotlights to their cars. Pure Matsuri style right?

To be honest, I lost count on how many cars blew their transmissions. I’m guessing I saw around half a dozen SR20 boxes and an RB25.

Dan Ressa was also in the same boat but managed to get his hands on another transmission.

Gearboxes weren’t the only issue. At night, this crew had an SR20DET out to swap out a piston.

Ryan Beal and his beige KE70 arrived late on Saturday evening. He was up working non-stop the night before to get the motor ready. We also did an article on this car earlier in the year.

The main track is very dark at night so I found myself walking through the pits shooting cars entering and exiting. Here is Ross’s Onevia.

This Toyota looked straight out of Japan with SSR Mesh and fender mirrors.

It’s not often you see cars such as this T18 Corolla in Australia.

…As did this R31, which clipped the wall in true Matsuri style. Stay tuned for Part 2. 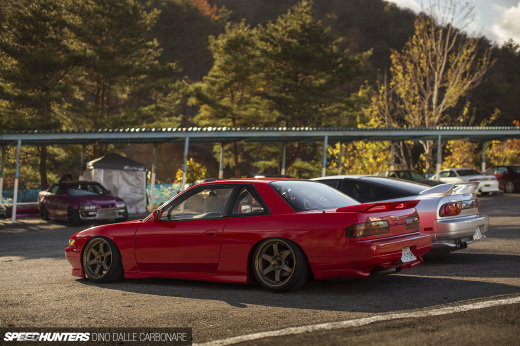 cunt i didnt take the amp out. i was putting a subwoofer in!!!

Been waiting for this update.

awesome! we have had a few matsuri events in Australia previously though including in Vic and SA.

so much <3 thanks casey

Thanks for the "Spotlights" photo, Mr Casey.

Hahaha jack you're on SH!

I'm ashamed of those pictures of my T18 soo dirty and need to get some nice skid wheels, haha.

just a correction it was 48 hours not 24

im sorry...call me a hater but events like this make me start to dislike drifting...i love the s-chassis and all the other vintage jap rides...but getting into this means that no single one of them can come out unharmed...these chassis are getting rarer and rarer and ppl just wont stop until they disappear...like the 86's...its kinda sad... =(

Great coverage and a great range of pics, the R31 pic at the end is legend

Photos are excellent, captions on the other hand made me LOL. Just stick to taking photos in the future...

Thanks for the photo of the Cressy Casey

That adm Cressida is sooooo jdm. With it's eBay fender mirrors and 'modern' china bride.

dude, photo of my 31 is dessert amazing, this was the last weekend it will ever be driven,

gone but never forgotten, by far the funnest, coolest, most reliable car I have ever owned.

They should call this beaterfest or something.... not interested in any of these.

sweet stuff, i found ross's front bar, but the car was no where to be seen.. :/

What a bunch of shitboxes! They should rename the event "48 hour junkyard challenge".

Nice one dude, was such a awesome event

Cool photos witch I wase thar all ways next year

Agree with fink... Stay to shooting photos! LOL'd at "RB25DET in a R33 Skyline".. What did you expect to be in there?

Luke fink your a Desmond, noone with half a brain cares about your opinion.

This gees me up for Wakefield Matsuri in November!

yea no v8, this post is what we love..fun drifting day.. no over expensive stuff like in FD =DDD

Luke, someone told me he was in high school, cant discredit his writing as he is probably 15

This is awesome! I'll be making the trip up from Canberra for the next one

ffs that post wasnt from me i think you should have to sign up to speed hunters to post comments this is stupid can someone get there ip address?

the good camera makes it look more glorified then what it was.

The quad headlight 'conversion' on the KE70 is actually factory.

Does anyone know the wheel/tyre specs on the black silvia in the garage with the caption "Some people had even fitted spotlights to their cars. Pure Matsuri style right?" under it?? Also, are those guards just rolled or pulled?

Yes there where alot of beaten up cars, but there where a couple of exceptions mine not one of them, haha. But I hope to have mine looking mint again one day and with a V8 in it, OH NO! (toyota V8 though)