Our Street Cars & Sleepers month is coming to a close, but we still have some impressive cars coming your way. Take for example, Zico Tran’s K20A-powered Civic.

With the assistance of JDMyard, the idea behind this Civic was to create a balanced all-rounder; a car versatile enough to be used on the street as well as the occasional track foray. And although drag racing was never high on their agenda, a recent experiment at WSID saw this EK street car cover the quarter mile in the 12s.

I have a soft spot for street cars that don’t wear their hearts on their sleeves. Everything about this Civic’s exterior is understated, just the way that I like it.

There’s no B-series under the hood of this Civic. Instead, JDMyard sourced a JDM K20A motor and LSD gearbox complete with 4.7 final drive. An Exedy Carbon-R clutch kit was also installed.

Cooling has been enhanced with a PWR half size radiator and Mugen thermostat.

A Golden Eagle fuel rail has been installed along with a SARD FPR, P2R gauge and Earl’s braided lines.

The AEM KSwap intake and RCrew 3″ exhaust allow the K20A to inhale and exhale properly.

Equal attention has been spent on the Civic’s suspension setup. To begin with, there’s a pair of strut braces and an ASR rear subframe support…

…Along with Cusco Zero-2E coilovers…

…And a Full Race Pro traction bar on the front.

Zico’s wheels of choice were these 15×7-inch RAYS RE30s in +35 offset which are mated to Bridgestone’s high-end street rubber, the Potenza RE-11.

Although the Civic may look stock at first glance, Honda trainspotters will notice quite a few changes, like the facelifted 99-00 taillights…

…and the Spoon carbon fibre wing.

Opening the doors to this car was amazing, the attention to detail was just as good as the exterior. The Nardi Orido Style 330mm steering wheel connected to the Mugen boss kit is a nice touch of Japanese goodness. Inside you’ll find a handful of rarer OEM parts, ranging from the Type Rx pedals to the floor mats. Did you also notice the Spoon gauge cluster?

The passenger is able to brace themselves against the Carbing floor plate.

The centre piece of the interior are the carbon kevlar Bride Gias seats. The pillars, roof and door trims have all been retrimmed in suede and red stitching to match.

The Spoon titanium shift knob is also a clean touch.

While this Civic might not be the most exciting car to look it, this little demon pulled a 12.949 @ 107.71mph quarter on street tyres (ADVAN AD08). Quite the sleeper don’t you think? 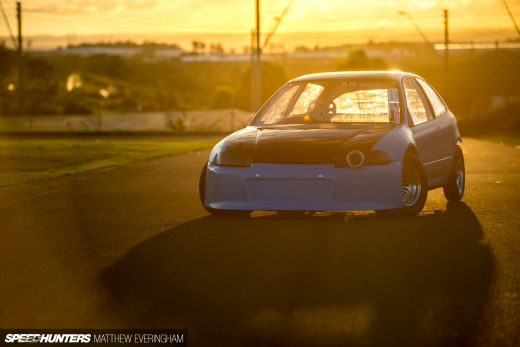 Record Hunting On A Budget

I love Hondas and this thing is textbook. The Orido Style wheel is a bit blasphemous but man, this thing is really well put together, it would be a fun toy for sure.

spoon clusters have become rare theese days. as an EK9 owner i have to say i like it. would probably look better in NH-0. the pedals are standard on any Type-R. at least my EK9 got same pedal's and it's not an Rx. but i really like it. well done

wow.. super clean inside and out!

enough of this shit wheres the new posts?

Sweet paint! Very nice build...and 12s would raise quite a few eyebrows out in the wild

love this one, it's perfect and I'm not even a honda guy

it also perfectly fits the sleeperstyle!

Perfect in so many ways.

Not usually wild about Civics, but this has to be one of the best I've ever seen. The exterior is absolutely perfect, great work!

I love the interior of this car. It screams "this car is prepared to be thrown around corners" but at the same time you can still keep a passenger comfortable inside. I really hope my Fa5 can be this clean someday.

Clean EK love it! Glad to see the K20A isn't under forced induction when you mentioned 1/4 times. ITBs wouldn't go astray though

4.7 final drive? Yikes. Don't think I'd want to cruise on the freeway with this thing! Awesome car, nonetheless (though I'd lose the "dorifto" Orido steering wheel).

i saw this car in person, and how can i say it, the car is perfect the best perfect civic ever, attention to detail is amazing.

I like how this dude bought this car already done, adds a few rare parts of his and acts like he built it, should really pay some tribute and respect to the person who built it from the standard form. i wounder how many other posers there are on this website .......

strangely enough i like the steering the most.. but yes - sleeper, looking very stealthy indeed! tick all the right boxes and some that i did not even think of - Thanks

Thanks for the feedback guys ! much appreciated.

The car has now got a 5 stud conversion with a new stance on it. New wheels and minor changes to the brake setup. Also got my hands on another 2 different spoilers that will bring a few smiles..

A HUGE thankyou to the guys at speed hunters. it was nice meeting you and appreciate the effort put into this feature !

Love the color and style.

LMAO, Datosan is a dumb arse.

LMAO, Datosan is a dumb arse.

regarding the car being bought like this, if you knew the car, then you'd know the car looks nothing like what it was.. so your comment is invalid.

Looks stunning! Does anyone know the name or code of the paint?

Actually, does anyone know what the paint code is for this? I don't know much about Hondas but it looks like it might be Blackberry Pearl from the Fit, but if it's not I'd really like to know what it is / how to get it

Cheers to the guy who did this EK, it's rare to see real sleepers such as this now, especially when herrafrush is so everywhere.

I think it miiiiiight be dark amethyst pearl

I think LOL was referring to the engine swap as it is the most time consuming part. Changing wheels and aero isn't something isn't all that hard. Though I still love it

^ hahaha looks exactly the same to me! Very nice car though, colour seems to be from the odyssey range.

as he said, you dont know the car so why are you bothering ?

just because he bought the car with a motor and paint job doesnt mean he didnt built it. he has never claimed he built it from standard.

Nice car mate, im sure jing would love what you've done to it

Im so happy. Waited all month for this civic. Makes me want to sell my dc5 and build a k20 ek. My fav wheels on it too

Just amazing! Beautiful and clean with the right mods.