I had a feeling it would not be a normal day as we touched down in Beijing at 8:30 AM local time. How often can you say you were stuck in the middle of a Chinese freeway during rush hour? I was traveling with six mechanics, five drivers, four members of the media (including me) and one judge. We were all headed to World Drift Series China in the city of Tianjin.

In China, everyone seemed to have switched on tourist mode.

Everyone, including Justin Shreeve and Joe Ayala, from "Tandem of die," were awe struck by the unfamiliar scenery.

Kyle had his bird flu mask on. I would think he'd be used to the weather by now since he has been to China on multiple occasions.

Josh Guild, from Vegas Drift, was having his first China experience.

The trip started off with a bang when we broke down on the side of an on ramp. The Americans gave out free high fives as an apology to angry commuters.

As soon as we got into the city, we picked up surfer dude extraordinaire, Matt Powers. He came straight from a gnarly surf trip on the island of Bali.

…but with some further investigation, we found out it was not a balcony at all.

We headed to the bank to change some dollars into the all mighty Yuan. Ross Petty and Kelsey Tanabe from Garage Boso used the colorful money to play monopoly.

The Chinese actually welcomed it and clapped whenever the Boso guys landed a trick as a small crowd gathered.

China is unlike any other country I have ever been to.

The dust in the air is very thick from all the new construction going on which seemed to make the sunrise and sunset last a very long time.

Here is the Tianjin Olympic stadium. You can see five guys with harnesses rappelling down the side of it, cleaning the glass outer walls.

Inside the stadium is an amazing sight.

This temporary race track was laid down just three days before the event.

International judge, John "Afro" Coatzee, was utterly amazed at the venue. He has been around drifting for 17 years but has never seen or experienced anything like this.

Matt enjoyed the surface of freshly paved track before it was covered in tire bits and other debris.

Ross Petty had the pleasure of laying down the first tracks in a Chinese built, right hand drive, Nissan S14.

I decided to do some more exploring around this massive stadium.

The stadium was completely empty since we came to the track five days before the main event.

It was hard to get to certain areas since most of the gates and doors were locked.

But boy was it worth exploring. Next to the stadium is an artificial lake that people can fish in. In the background is the city of Tianjin.

We stuck around until all the gates closed so we left the only way we knew how – by climbing fences.

Everyone was hungry and it was time to check out the local cuisine.

We found a nice 24 hour authentic Chinese restaurant. One of the more interesting things we had there was a green bean cooked in a spice that makes your tongue go numb.

Back at at the hotel, it was time for a late night meeting with the judges.

The next morning we decided to go shopping for souvenirs. Vaughn Gittin Jr. was nice enough to hail us some cabs. This is his second time in China. The first time was the very first WDS event back in 2006.

We ended up going to a flea market where we spent most of our day.

They had very interesting brands from all over.

We stumbled upon a cool little die cast shop in a sea of clothing shops.

…Thomas the Tank Engine and his friends.

There were definitely some rare collectables at this shop.

Some seem to have been sitting on the shelves for years.

Kyle ended up with this neat Ayrton Senna helmet.

I picked out this 300zx GTS driven by Steve Millen.

I followed Kyle around for a bit more seeing that he found some interesting things. He stocked up on some "lucky cats" for his shop.

He even found a nice blazer.

We also went to an open supermarket.

Vaughn was in search for fresh fruits and vegetables…

…since he actually brought his juicer from home so he can stay healthy while on the road.

…while Matt found some new decals for his car.

The Americans got along great with the locals.

After a long day of shopping, it was time for some street food.

I never usually eat street food, but I dove right in on this trip.

This was seriously the best meal we had the entire week.

Vaughn was energized and ready to rock.

He rocked all the way back to the stadium where drivers were being interviewed one by one by local media.

The next morning, everyone headed to the track but none of the cars were there yet, since they were all stuck in Customs.

The boys checked the K-rails to see if they were real or not.

Vaughn helped set up the track.

Joe volunteered to be a human clipping point.

Ross pretended to drive the course on his bicycle.

Team USA would wait four days for the cars to get released by Customs. At 6am the next morning the cars arrived at the track and chaos began. Stay tuned for part 2.

More Behind the Scenes stories on Speedhunters 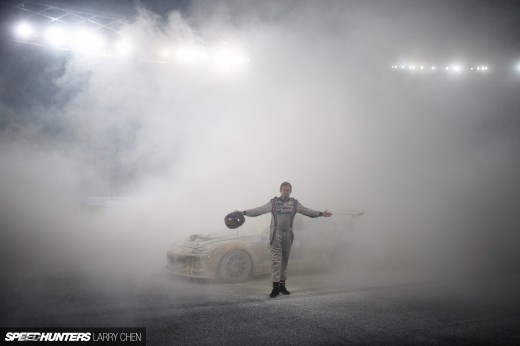 World Drift Series China: Getting Sideways On The Streets

wicked photos.. looks like you guys really enoyed it out there.. kind of makes me want to get some "Crcos" and go yomping through the street markets too. - loved the look of the die-cast model shop, i would have probably bought most of the recognizable models in there. That stadium is massive plus the track looks good too.. got to say you guys didn't look like 'Fish out of Water', you looked quite 'At Home' - can't wait for Part 2. Thanks!

It's quite funny. The chinese hate the americans and all you guys are doing over there is making a fool of yourselves. Don't get me wrong, you guys are great fun to read about etc and great with the drifting, but it seems like you wanted just "flaunting" being american and having money in a country dominated by poor lower-class citizens.

I fail to see how having a rocking good time and dishing out some friendly high fives could be considered "flaunting being an american and having money."

Larry, AMAZING ARTICLE! I can't wait for your next one. The pictures in here were awe inspiring, and Joe Ayala's shots added an awesome perspective. He's almost as good as you!

Jace. I can tell u that over 70% of Chinese don't actually hate American But only these work for government are BS about US everyday, On the street u can spot many Chinese are using products of US (I know i know they actually made in China but they are still US-Design) u know what, many years ago a Chinese bought a Viper, that car was very frist supercar" imported to China. Yes, i am not fully understanded or agreed with some of US policies, but i never against American.

Sorry about my Enl:(

To speedhunter, ur guys have fun in China

GREAT TO C SOME SPEEDHUNTIN IN MY HOME COUNTRY!!! XD

Hahaha so that's were my homie John has been....awesome stuff,can't wait for the rest of this...

Our final day in China started off with a big bang. The cars started to arrive around 3 AM local Beijing

Our final day in China started off with a big bang. The cars started to arrive around 3 AM local Beijing

Larry always does such a fantastic job with his coverage. So much better and more interesting then just car shots. And the quality is above and beyond. Thanks SH/LChen.

Hope this keeps coming. Always enjoying your work Larry especially these behind the scenes articles!

What's up with all this hipster stuff?

What are the shades Matt is always wearing?

The ones with the gold lens

Great pics and explanations! Thanks

Nice holiday snaps kids. Some people have to work for a living. I'd love to know how you guys fund your nice little play time!

by just looking at the stills....seems like a bunch of western people foolishly misbehaving in someone else's home. Show some respect. Breaking down in traffic... but turning it into a photo shoot? Jumping fences? Sitting on the building's balcony / eave clearly built for its signage? westerners thinking they own the joint...., again. Speedhunters, letting 20 somethings post this story reflects poorly on your blog.

Joe is a BOSS!