The European FIA GT3 Championship's visit to the Slovakiaring in central Europe, constructed just two years ago, attracted a whole slew of local talent for the weekend's two races. For starters, the British-run #20 MTECH Ferrari featured an all-Slovakian crew, with Jan Danis and Zdeno Mikulasko at the wheel of the 458 Italia. 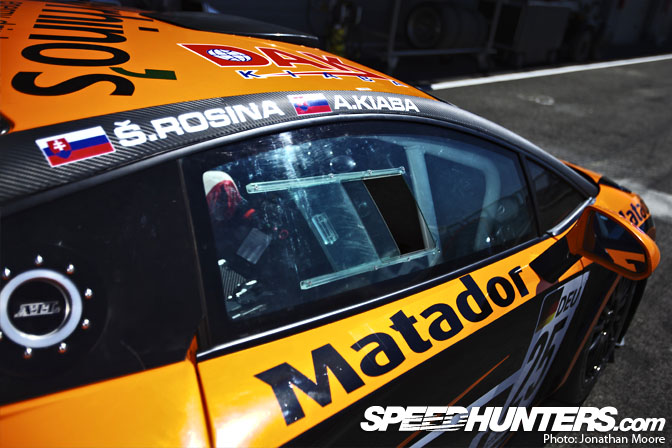 Next up, racing for Slovakia in the #25 Reiter Engineering Lamborghini Gallardo were Stefan Rosina and Anton Kiaba. Jirko Malcharek, sometime FIA GT driver and Minardi F1 test driver in 2002, joined the WRT team, co-driving the #32 Audi R8 LMS. His CV showed that he wasn't your usual jobbing racing driver, with an employment record that included being the deputy prime minister of Slovakia! 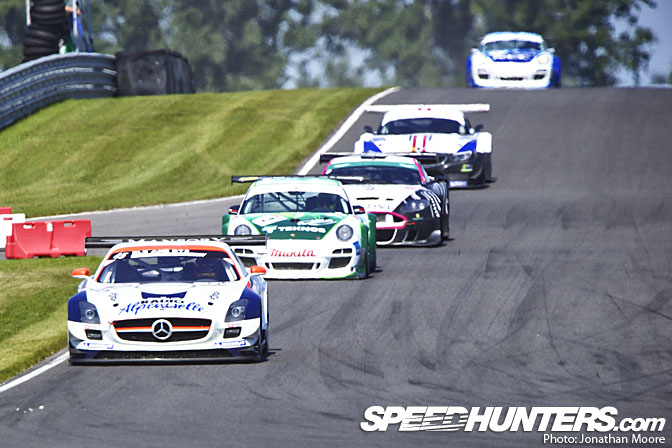 Filip Sladecka joined Heico's #45 SLS and was part of the Mercedes steamroller this weekend. And then let's not forget series regulars Czech team Gravity/Charouz and a Russo-Czech quartet of drivers in their two Mercedes SLS AMGs and the #13 Fischer Ford GT with another Czech driver, Martin Matzke. 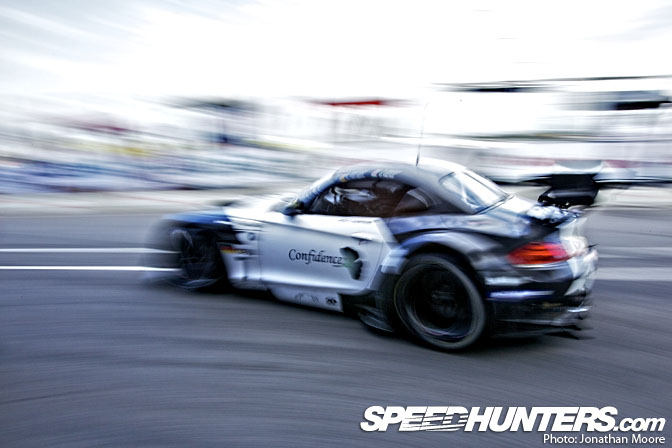 Last not but least, of course we had Hungarian driver Csaba Walter in the #7 Team NFS BMW Z4. After last year's visit to Brno in the Czech Republic, was another visit to eastern Europe for the GT series deserved? Overdue would be a more appropriate word! 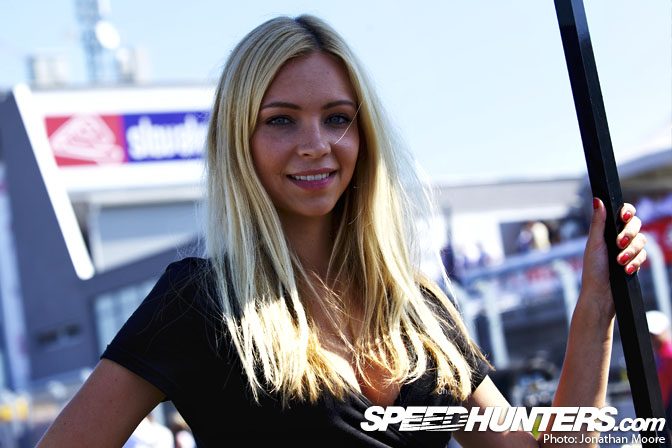 The fifth round of FIA GT3 was originally due to take place at Smolensk in Russia – another track built only recently, and one designed by F1 go-to man Herman Tilke – but FIA approval for the track couldn't be achieved in time. The Slovakiaring was a frustratingly late confirmation as a replacement, and the triangular track layout didn't exactly look promising, however enthusiastic the track's website made it appear. A flat, tight go-kart style track? A compromise of lack of space over track styling? (By the way, the focus of the above picture is the track map in the top-left, just in case there was confusion.) 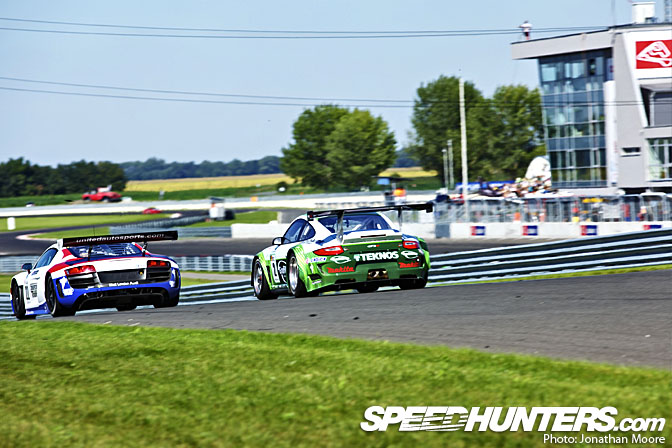 Wrong. What a fantastic track. The seemingly compact layout disguises what is the longest track on the calendar, at almost 6km long and with 14 challenging turns. If it wasn't enclosed within the triangular compound, the track would be off through the surrounding countryside and heading for Bratislava! Sweeping, tightening turns like one, two, five and six are complemented by twisting, corkscrewing hairpins. And then there are those jumps. 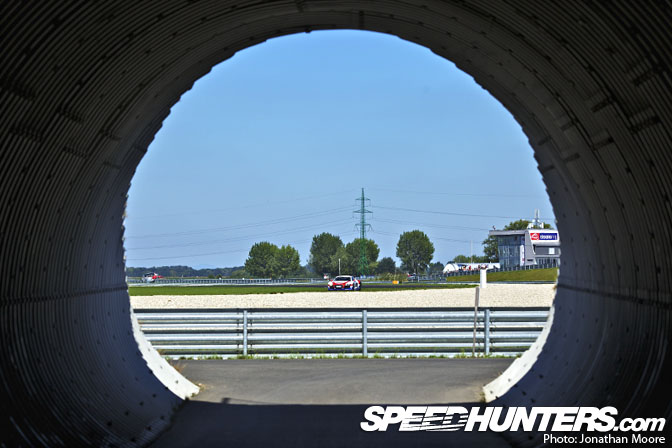 There are four Scalectrix-style crossover bridges – which serve no purpose at all than to make the track awesome. Otherwise, they serve no practical purpose that I can see. Normally, access roads go over tracks on bridges, or tunnel underneath. Here there's been a deliberate attempt to make things more interesting. How good is that?! Underneath each built-up section there are simply access roads – which makes moving around such a long track a lot easier for the officials, recovery vehicles and, less importantly, us photographers. 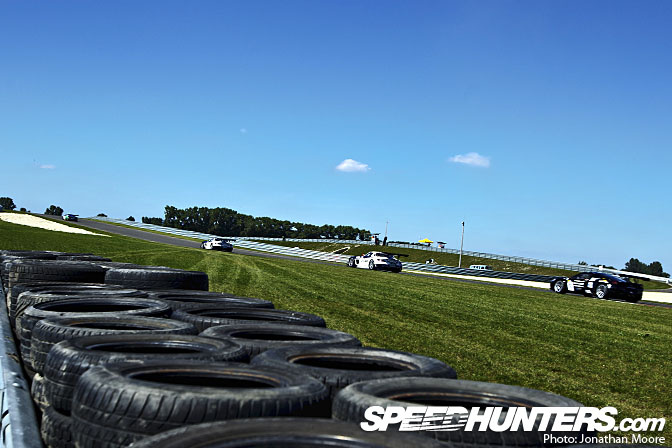 The first one is straight after the first turn, but the exit gradient is quite forgiving and the cars visibly quite stable as they crest the brow. 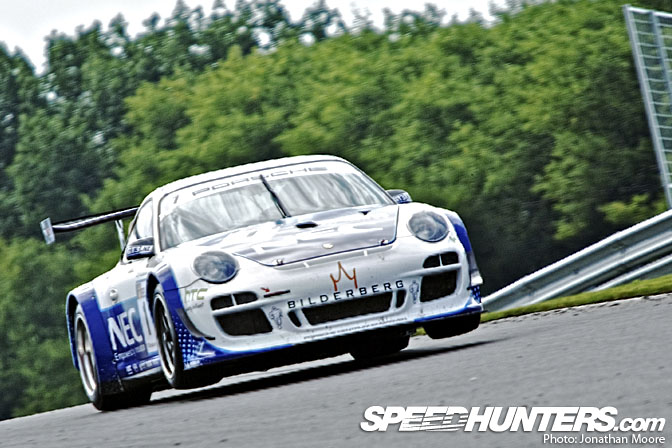 The infamous second hump, already illustrated, is on the run from turn two to turn three. A racecar in a local race series had already flipped here in a predictably car-destroying fashion at a previous event, and even the aero-laden GT3s were getting serious air. By the second session, it was just the backside-heavy Porsches and skinny-winged Ferraris that were still getting airborne. 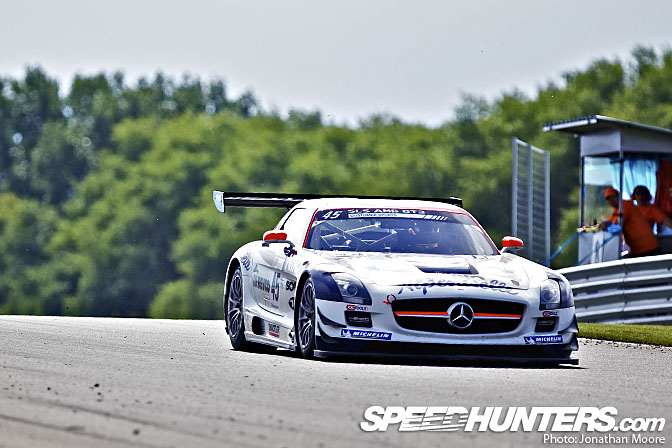 The opposite was the problem for the heavy Mercedes. With the heavy engine up front the SLSs were coming down hard on their front suspension first, compressing down onto the bumpstops and causing real concern for the Merc teams. No matter the specifics of the freewheeling take-offs or crunching landings, watching from the side of the track I could barely believe it. 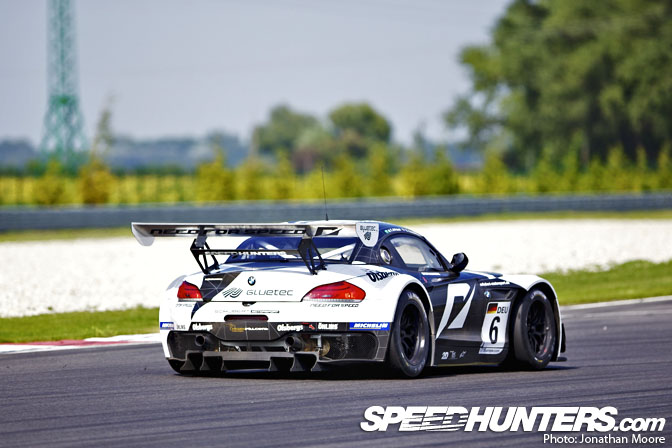 It was exhilarating and breath-taking at the same time, as the cars were hard on the brakes for turn three the moment they regained control, squirming around to get slowed down and keep in a straight line. 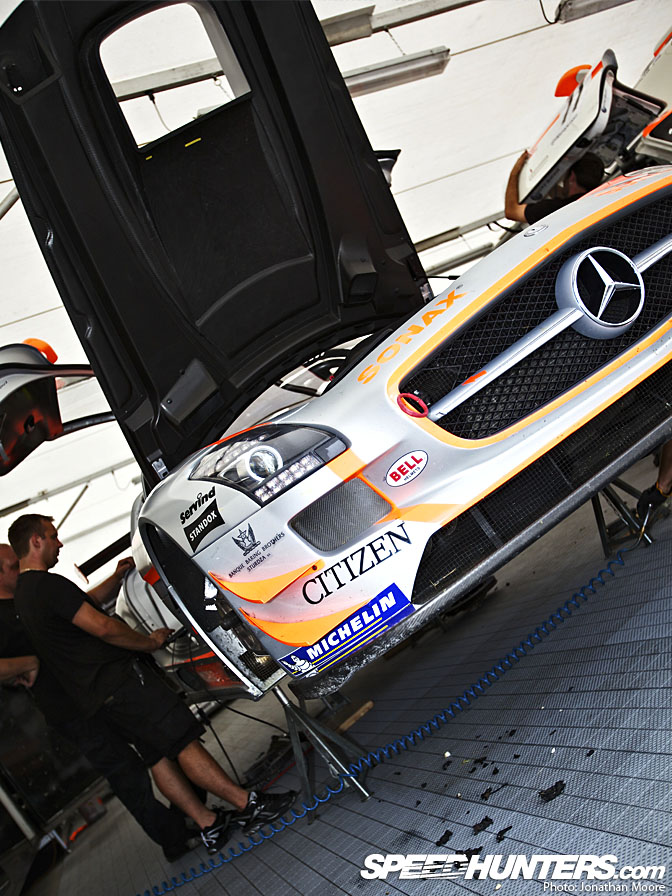 In the opening practice session, when cars were still merrily emulating aeroplanes, one team's telemetry recorded that their car's front wheels were off the ground for 54 metres. That kind of fact certainly helped calm drivers down for the second session. 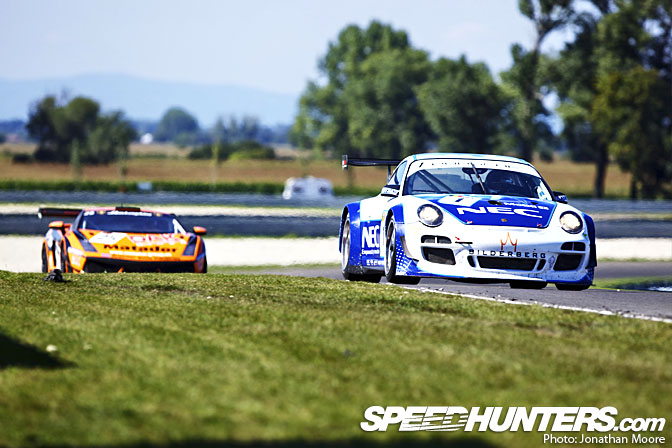 The third hump, located after the seemingly magnetic gravel trap of turn nine, is somewhere in between the previous two: a slight twist of camber and a mild crest before a gentle drop. The challenge here was more in the preceding corner. 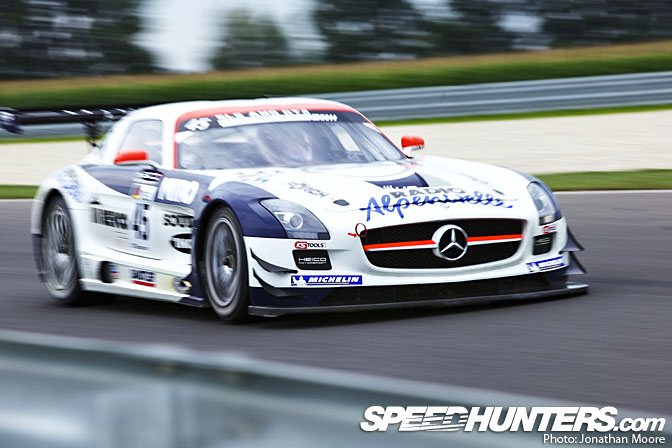 Aerobatics aside, it's not like the corners in-between the bridges are 'turn steering wheel, accelerate, move on to the next' bores. Moving briefly back up the track to turn two, you could really see the cars working, the limits of rubber adhesion fighting the invisible hand of aero. The cars heel right over – like Jarama's turn 2, it's a similar balls-out corner – and it's also the closest you can get to the cars on the track. This is one of those places that sometimes feels too close, and you tend to hang back from the barrier just that little bit more than normal. 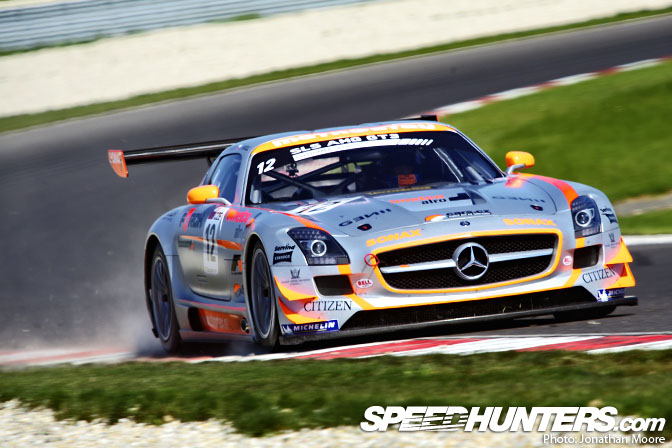 My next favourite spot was on the run up to the crest after turn nine. Clip the entry apex and push the car hard up the hill, grazing the grass on the right of the kerb – popping up a little cloud of dust – and you make the most of the straight up-and-over run to the long and lazy turn 10 hairpin. 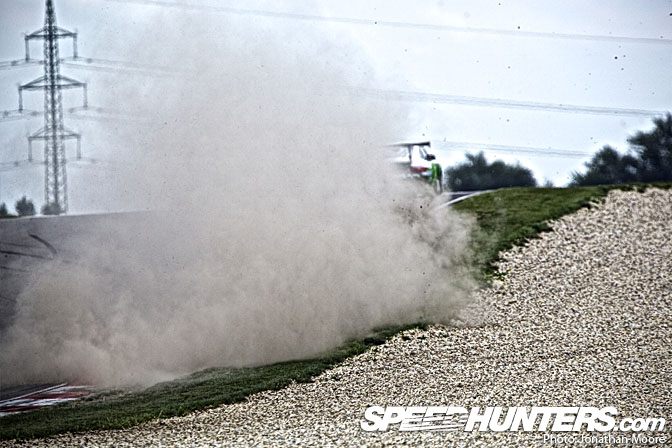 Miss that entry apex, and the exit kerb has been and gone before you've a chance to react. The gravel trap is short and not very sweet, with unforgiving tyre barriers just the other side. If you're lucky, you'll still make it through with a huge cloud of dust behind you – but several cars just didn't have the luck this weekend. 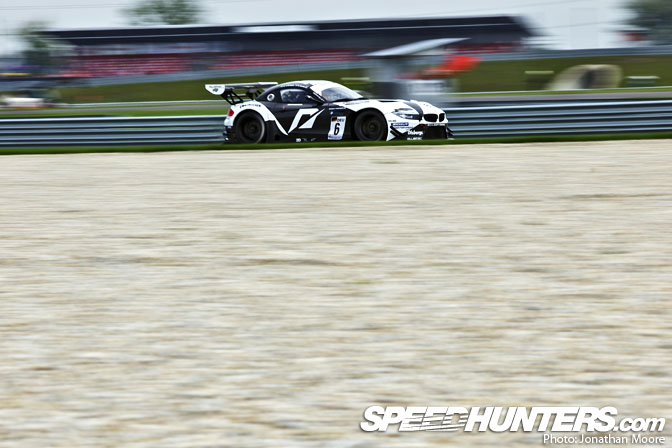 Despite the switchback nature of the track, there are still a couple of areas where you're seemingly miles away from the action, with acres of gravel trap in between. 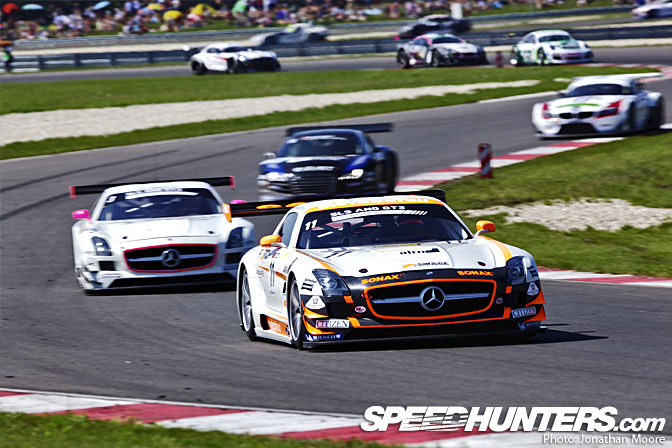 But that's really only in that inner circle of of the circuit that brings the track back on itself and then runs in the other direction parallel to the straight-and-rise between turns one and two. Everywhere else the cars are on top of you – and seemingly coming from every direction! 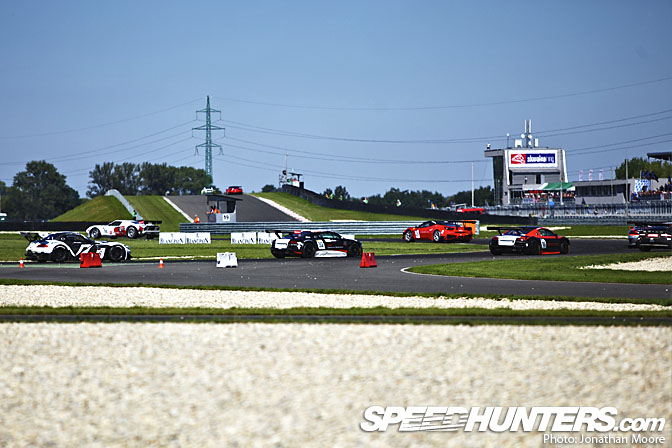 In almost every direction you looked you could see cars going left, then other cars going right, and then even more cars going straight away from you! It's like one of the more surreal scenes from the old Grand Prix movie. There's no shortage of good angles at the Slovakiaring, though the only shame is that currently there's no spectator viewing in this central area. 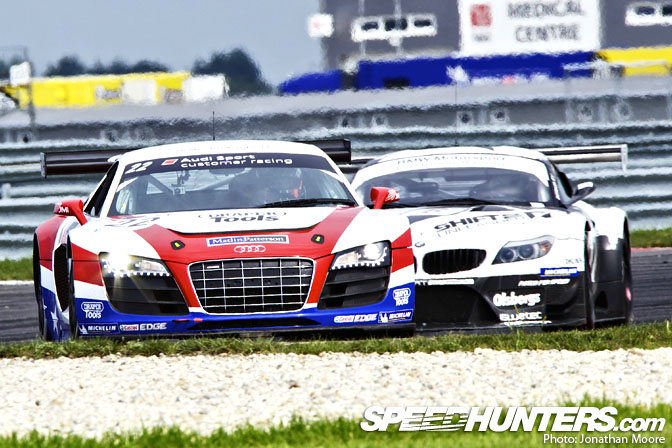 The unexpected thing is the total lack of barriers at some places in this internal loop: protected by acres of gravel, safety cars sit ready for action just sitting in the middle of the grass. It's rather off-putting to be walking near a live track with no protection in between you, despite the virtual impossibility of a car making it that far by accident. Another surprise was seeing recovered cars driving back to the paddock via the access roads whilst races were still on! Seeing a damaged Audi R8 limp home past a BMP tracked armoured vehicle on show by the paddock entrance was surreal… 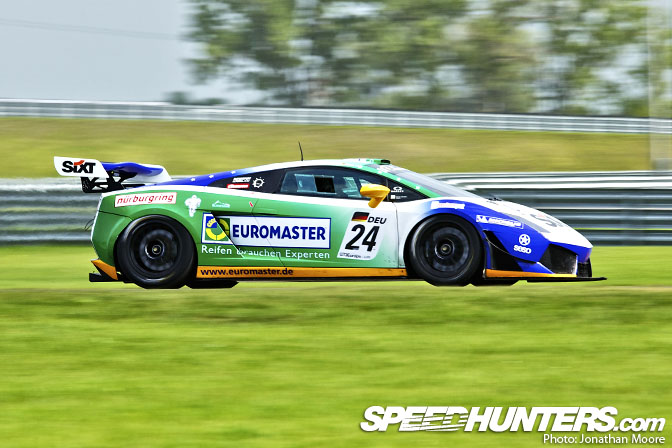 In a slight optical illusion, there's also one section where the cars appear to be driving across the grass! 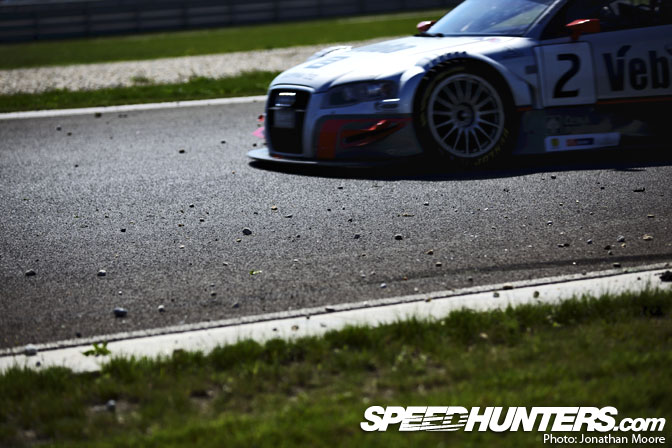 By the end of the weekend, the amount of gravel dragged onto the track made it almost more rallycross than race circuit. Maybe that Gymkhana reference wasn't so misplaced… 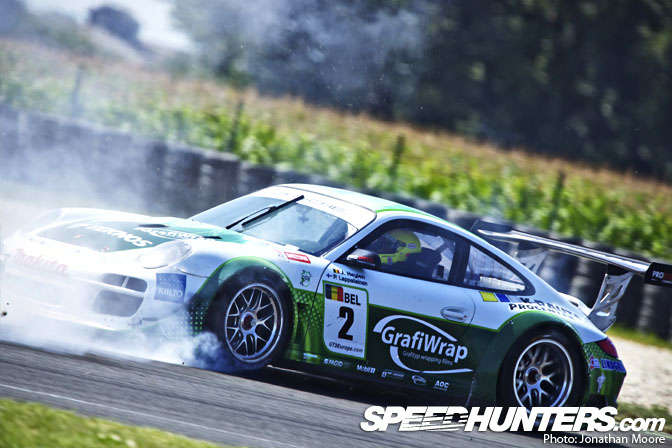 So, the Slovakiaring seems to have been a real test of driving skill, a unique and interesting track – and a hit with the teams and drivers. The impressive reflection on the drivers was the relative lack of damage to cars by the end of the weekend, except for the amount of gravel to be swept out of intakes and a couple of unpainted carbon body panels on show on Sunday. Next up, the packed show car and entertainment displays.

Really glad to finally see some quality motorsport from Slovakia. That ring makes us all very proud!

Looks like they made a good choice by going to this track.

If you want a boring track - Herman Tilke

I'm sorry, but what map? hahaha That girl is gorgeous!

And this track is so beautiful that I wonder why I have never heard of it before.

Those airborne cars will make great desktops too

Good to see Slovakia getting some positive coverage... Looks like a great track!

I think this season is first for Slovakiaring, You can visit website (in english) http://www.slovakiaring.sk/home-en/

I think they did great job and we have other very good circuit in central europe (especially in czech and slovak republic, ...). There are a lot of possibilities how you can go (6 different variants in both directions)

First time I was shocked that I see slovakiaring here, but I'm very happy and Thank you speedhuters for this article. People must know that we aren't retarded

Nice to see my country on Speedhunters <3

I think the camera angles from the video broadcast should be rethought, but from what I saw, the track looked like it was a lot of fun